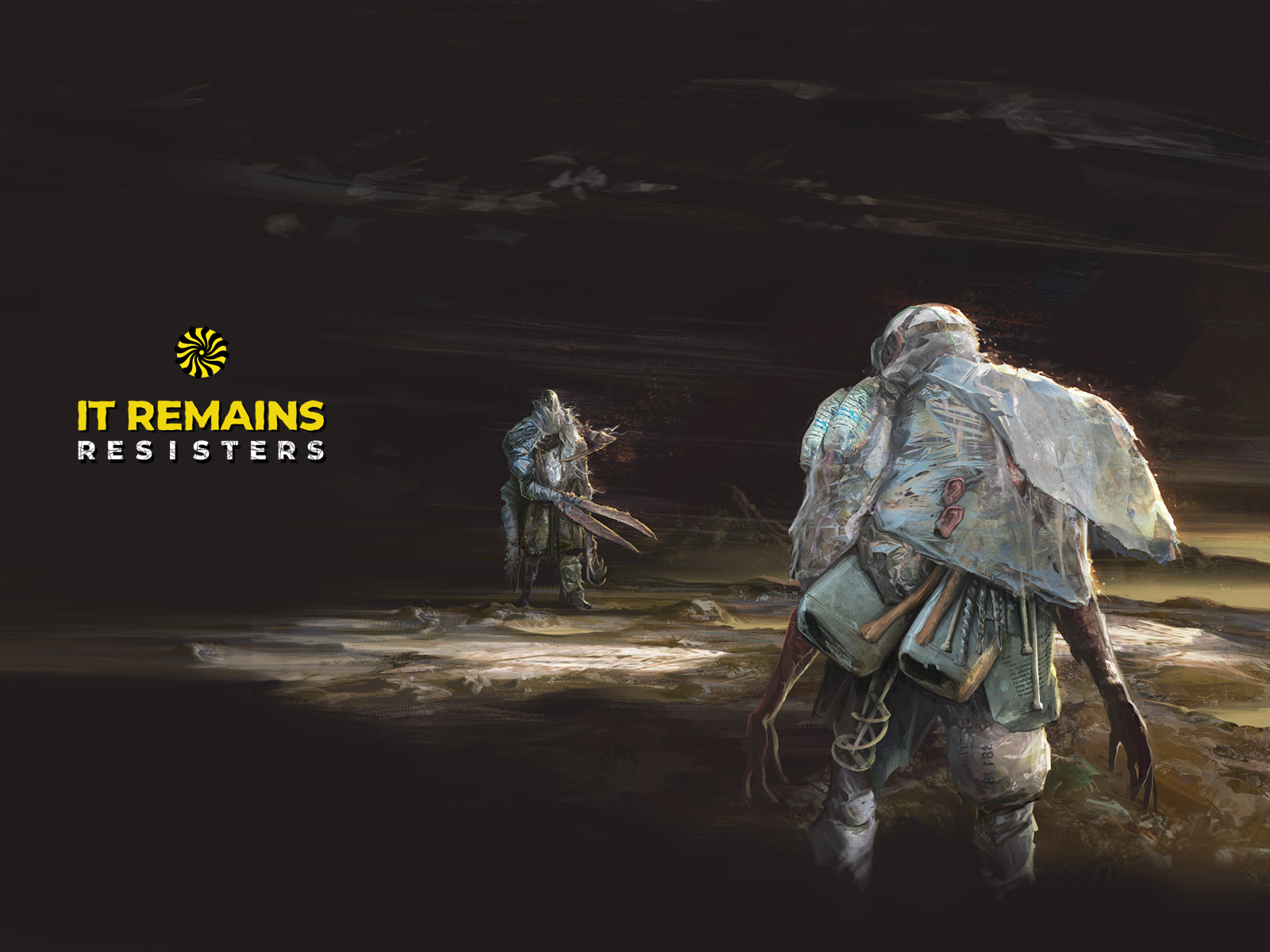 How long would you hold on to the flicker of light? That is, in essence, what the NFT collection and graphic novel by Vasil Tuchkov asks. Set in a beyond dystopian nightmare, a father-son team, both simply called It, walk the trashed Earth while trying to resist the inevitable pull of the Yellow Mouth. The Yellow Mouth is the ultimate void, the emptiness and quiet that sucks the Earth steadily into its deep, but also a ruthless deal broker that is ready to fuse your mortal flesh with any metal or plastic ‘addition’ you choose. Very few things remain- but It remains, for now. A Resister in the Yellow Mouth. Take a peak at the trailer

It Remains the graphic novel, and the characters made into NFTs are already two years in the making, which is clear the minute you lay eyes on the project. For anyone present in the space for a significant amount of time, the ebb and flow of finding, standardising and gatekeeping quality has been an interesting rollercoaster to witness, but some things about quality have stayed the same, regardless of whether this conversation happened now or in 2017. If there is artistic merit behind a project, you will be able to tell. Originality and true artistic process are a hell of a hoop to jump through. Afraid of the dark?

The real Yellow Mouth of this type of theme is the difference, energetically, between shadow work and something demonic. Carl Jung (1875-1961), who is acknowledged as the father of shadow work, and the concept of the shadow self, describes it as recognizing the parts of the self that are not desirable. If transcended and integrated, the shadow self is a vital part of any human being, while nihilistic, demonic themes lack this comprehensiveness and eventually amputate its own hind legs into godless voidism. An example of work that doesn’t endeavour to integrate or reflect upon our less than desirable aspects, but rather just banks on the shock value is the latest Nike and Lil Nas X collaboration of shoes that contain real human blood.

Link to article on these… shoes The question remains, does the eye of the beholder truly possess the beauty, or maybe terror in this case? What is needed, so that portraying worlds like this can become shadow work and not simply cannon fodder for horrible nightmares and the distortion of our sense of self? 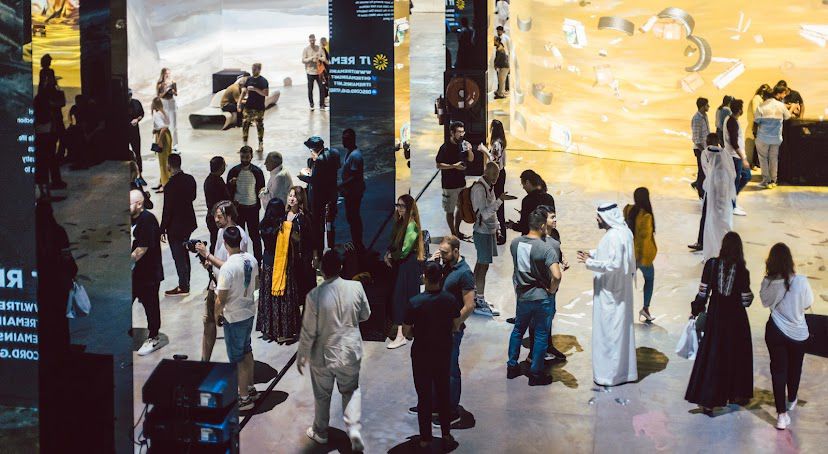 Pics from the show at

Distortion needs clarity. Distorted themes and images need transcendence, a framework to hang that heavy hat on. It needs a reference point, whether it be observing the shadow in ourselves, but also in our cities and communities. Look long enough, and the shadow, the call of the void, will present itself even in the most glamourous cities in the world, like Dubai. It’s what to do with the information once it’s presented to us. Can we let go when it’s our time to do so? Or will we be like another It Remains character, an old man suckling on the bone marrow of the youth, unwilling or unable to let go? Because it’s not just the call of the void that we must manage, it’s the fear of the unknown, and the cling to life, however dystopic it is. 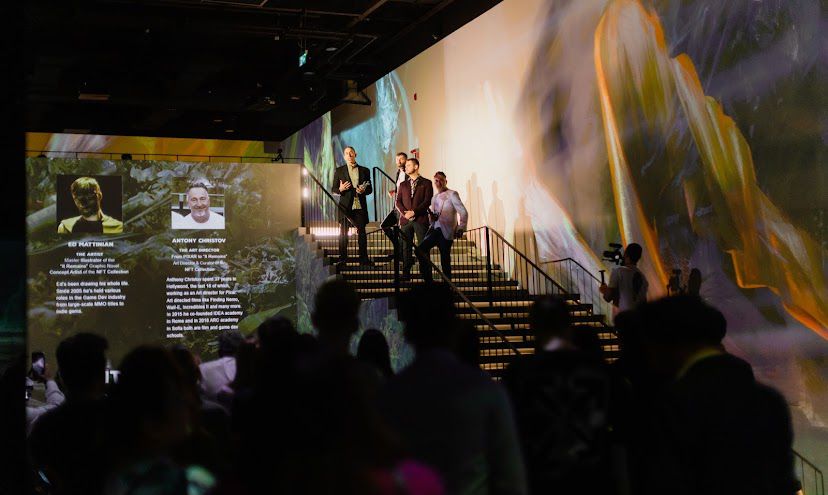 The artist addressing the audience

One way the respectable team of It Remains have inched closer to transcendence beyond the work’s artistic value, is by attaching the NFTs to meaningful charities. Tuchkov was inspired by the survival driven way homeless people dress themselves against the elements- with scrap bits of plastic, and this is clearly visible in the look of the Resisters, the newly minted characters of It Remains. The opening night at Infinity Des Lumierès was a great testament to the artistry and community and will be remembered as one of the mail stones of the developing maturity of the NFT market. Undoubtedly the secondary market of these NFTs will be lucrative, thus providing income for ordinary men and women, whose intellect and creativity our shared world will need in the future, so that we don’t witness a collapse of civilization like in the novel. 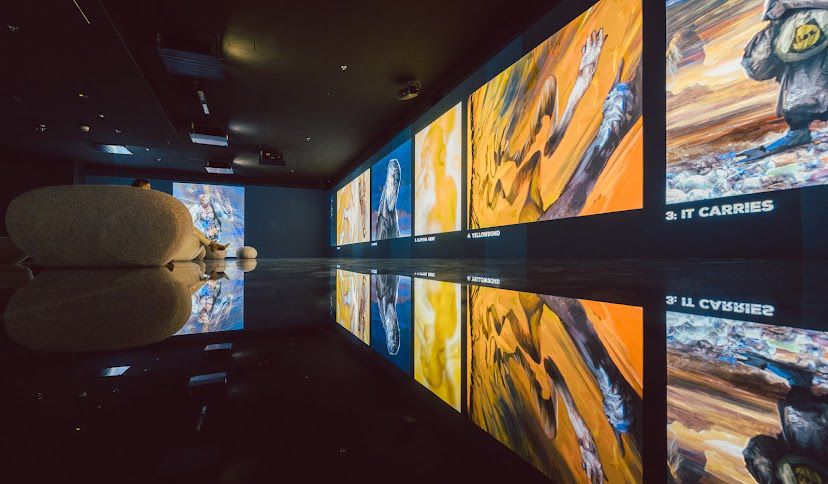 Sometimes the easiest way to get to what we want is by painting a picture of what we don’t want. Quest writer Lotta has been integrally involved in the world of digital art, cryptocurrencies and NFTs as VESA’s wife for many years. An experienced writer, she is now turning her attention to write about the different phenomena in the space.

Tags: blockchain artblue chip NFTsdigital artDubaiMetaverseNFTNFTsPixar
Tweet123Share196ShareSend
Win up to $1,000,000 in One Spin at CryptoSlots