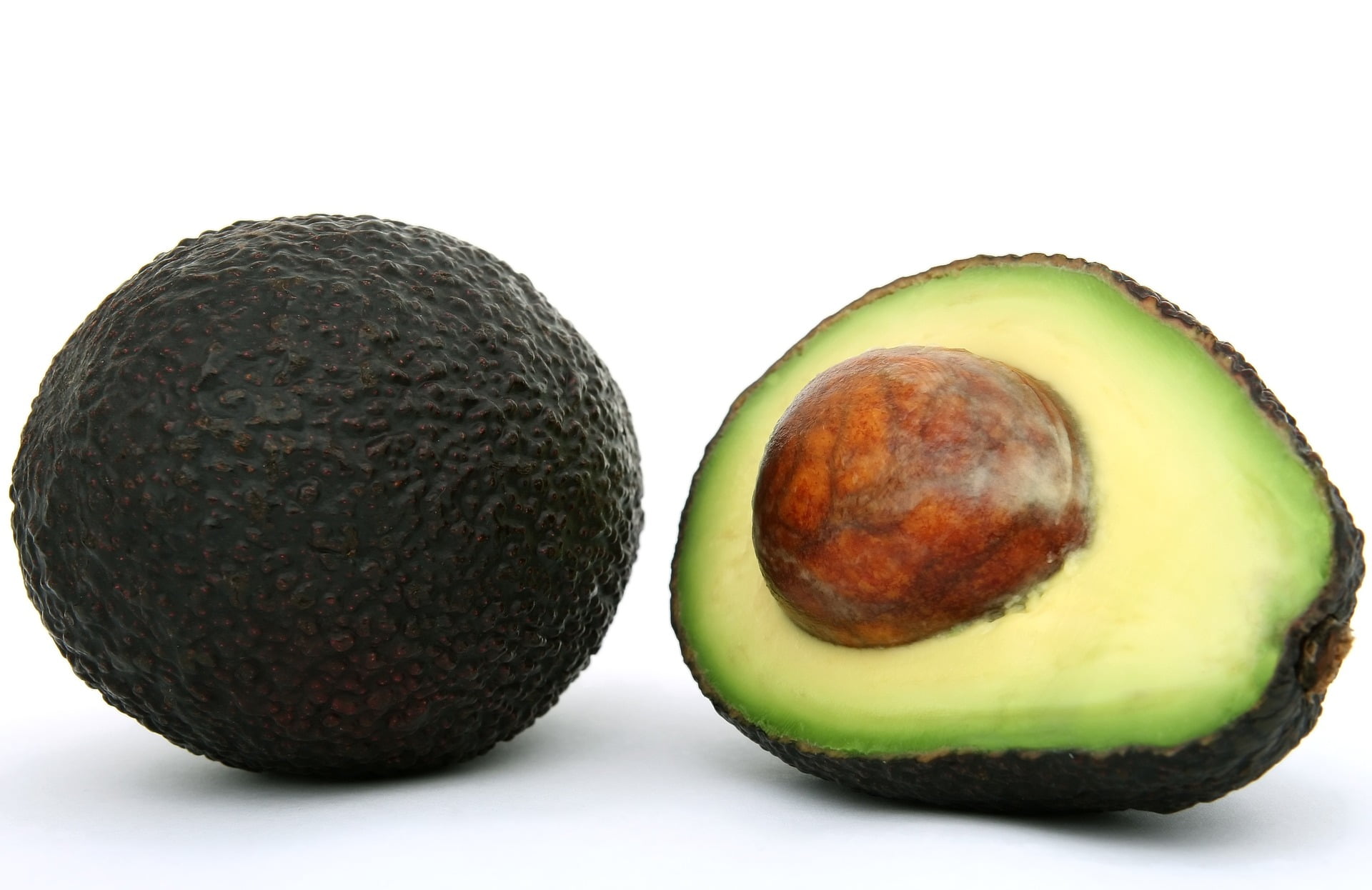 Something spiked by 35% yesterday and it’s not even a crypto.

On this graph, we can see an extremely high correlation between bitcoin and… avocados? 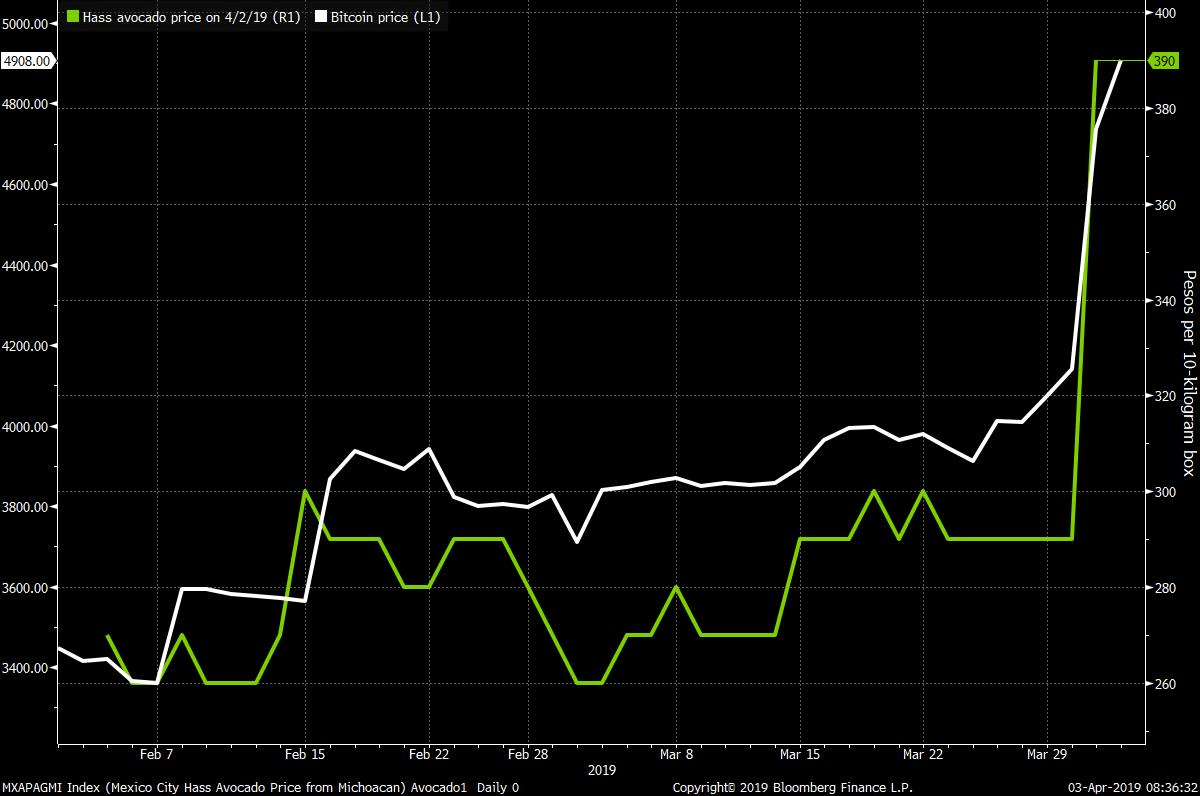 A threat last Friday from President Donald J Trump to completely close the US-Mexico border has caused several markets to go a bit berserk but avocados are the pit.

The chart above clearly shows what can happen in a low liquid environment.

The thing with avocados though, is that whatever happens in politics this situation won’t last forever, it’s just a temporary price spike due to external conditions. Eventually, the market will correct itself, either by political means or agriculture.

In bitcoin, however, there will only ever be 21 million BTC created. Low liquidity can create price spikes but permanent scarcity is a way to ensure that higher prices are sustained over time.

Please note: All data, figures & graphs are valid as of April 3rd. All trading carries risk. Only risk capital you can afford to lose.

A golden cross was observed recently in the US stock market and many analysts are taking this as a bullish sign.

This graph of the S&P500 shows the golden cross just a few days ago. We can also see a death cross that happened in December.

So the charts are showing some positive signs. The news, on the other hand, is not so spectacular.

In a press conference yesterday, the World Trade Organization forecast some very strong headwinds for global growth and set their 2019 forecast at its lowest level in three years.

Bitcoin is Above the Cloud

Suddenly, it seems that everyone is bullish on Bitcoin again. The fact that we’re sustaining above the 200-day moving average and even pushing a bit higher this morning is an incredibly good sign.

We might be a way off from a golden cross, but that’s not the type of thing that happens in a single day of trading.

For the chartists among you, I’d also like to highlight this graph from @CarpeNoctom that shows Bitcoin closing above the cloud for the first time in 442 days. 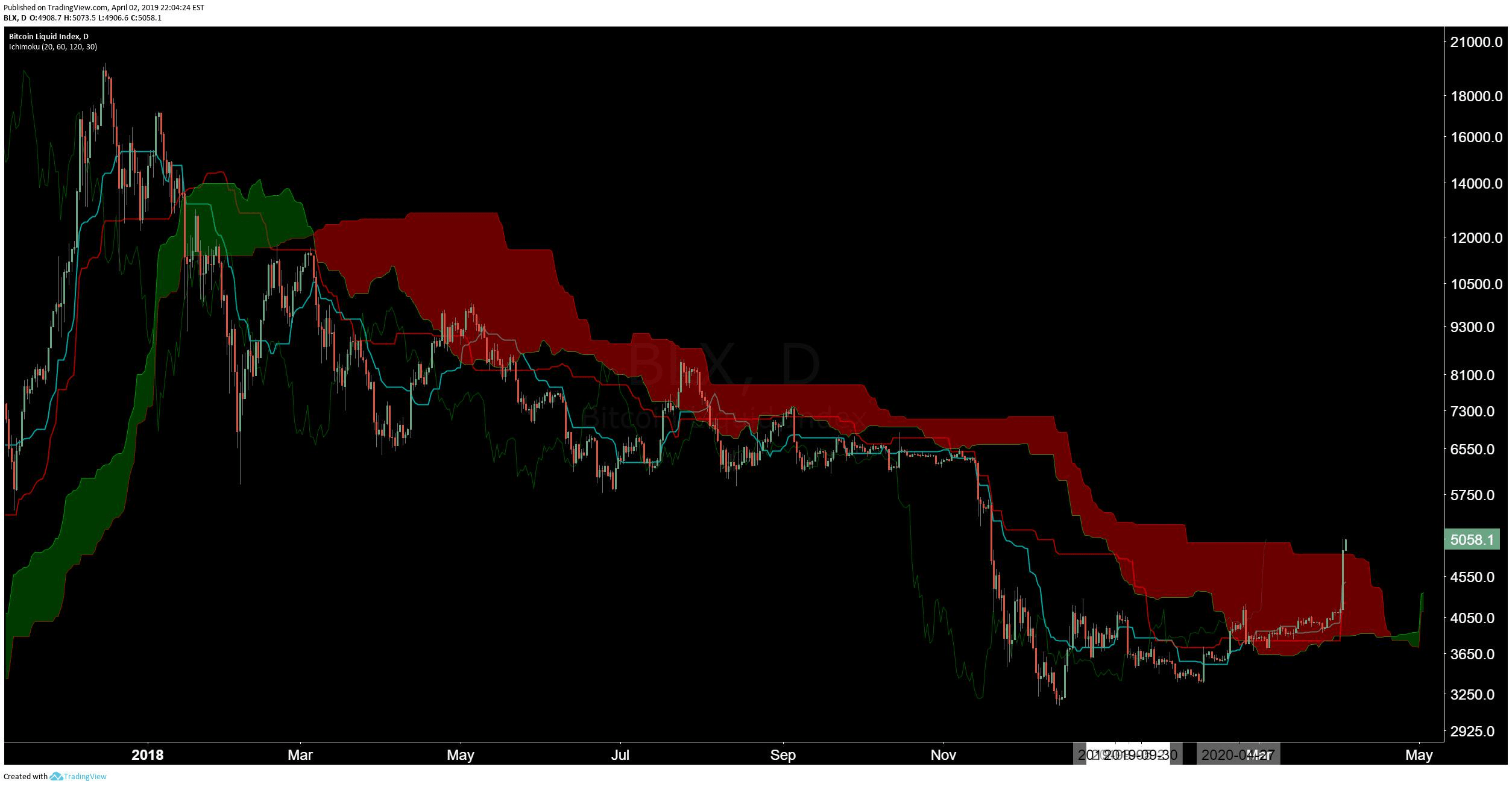 It’s important to note that yesterday’s surge happened on strong volumes. Elevated volumes are a good indication that a specific move has weight behind it and this one is massive.

The volume across the top ten crypto exchanges, as tracked by Messari, is up to about $1.3 billion, which is about $1 billion more than usual.

It seems that traders on Wall Street were able to participate in the party as well. Volumes on the CME group’s bitcoin futures reached a total of 12,015 contracts, which is about $294 million, so roughly 22% of the figure noted above.

Even though the following figure has been proven to be false, we can also take a look at the level of volumes reported by global crypto exchanges, which topped out at $86.4 billion, their highest level ever.

Of course, this last figure means absolutely nothing, but still fun to look at.

Is the FOMO back?

As they say in the markets, nothing changes sentiment like price. As we stated yesterday, the move was mainly technical due to crossing the $4,200 level. A barrier that had been building up over the course of months was suddenly snapped.

Amplifying that sentiment are the good members of the media, who did a fantastic job yesterday of highlighting the reasons for the price move. I’d like to personally thank the people at Bloomberg for having me on their show yesterday to respond to the markets in real time and to all the other financial media and crypto outlets who I’ve been in contact with over the last 24 hours.

It was really cool how just about everyone completely rejected the idea that this move was the result of an April Fools joke but the highlight, in my mind was a piece from Reuters, who claims that this may have been caused by a single whale.

Of course, due to the anonymous nature of the crypto market, it would be impossible to prove but the theory is that a single buyer spread a buy order of 20,000 BTC across three major exchanges, thus taking out all of their order books simultaneously.

If true, the mystery buyer certainly knew what he was doing. The order buildup above $4,200 that we’ve been talking about would have certainly spurred on the price reaction of his order.

Again, if true, this serves to highlight the price multiples laid out in this article, where an inflow of $X into the bitcoin market could very well increase the overall market cap by $X times 10 or even 20.