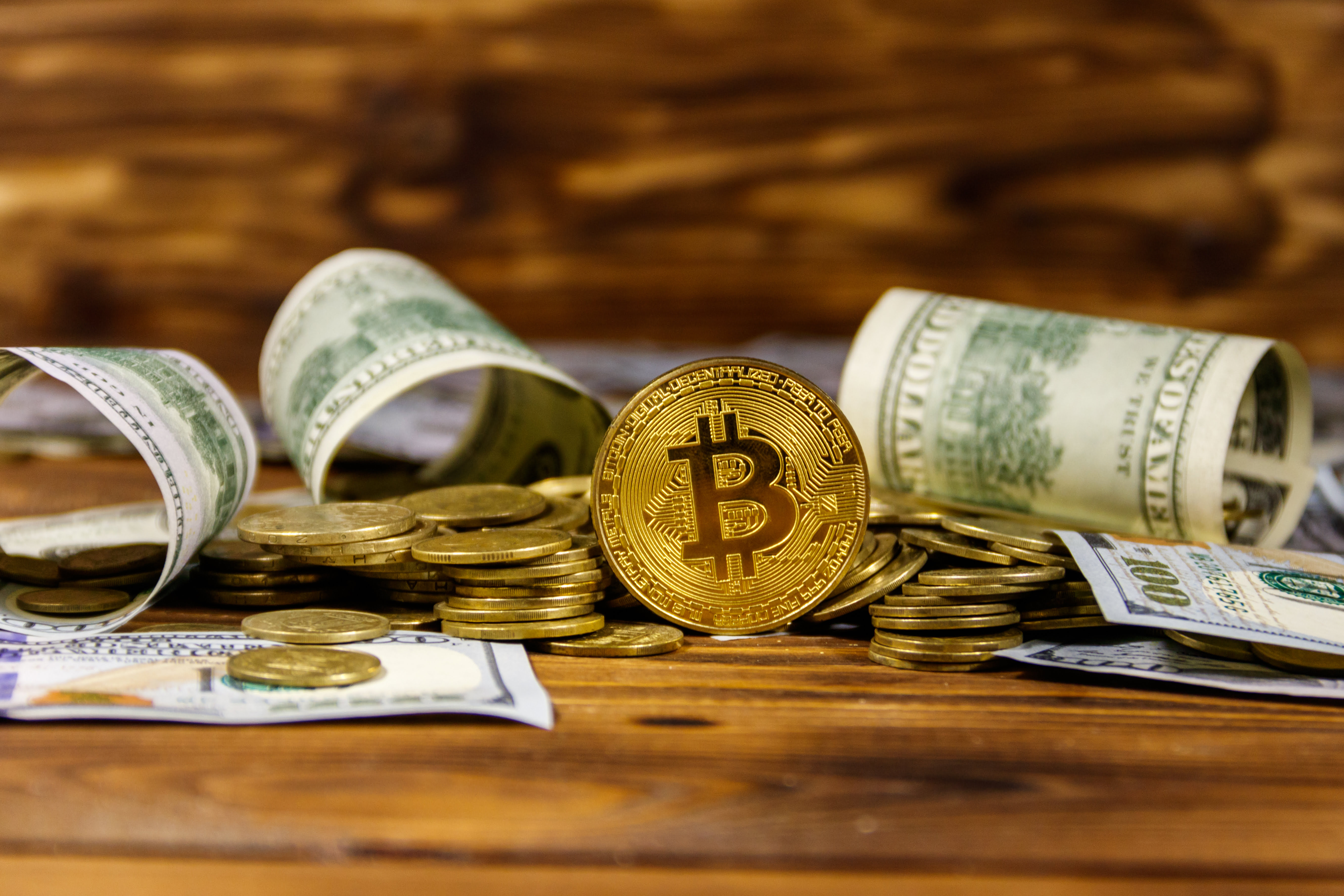 The action of intervention often has negative connotations, but sometimes intervention can save lives, as any surgeon will probably tell you.

The Bank of International Settlements (BIS) has put out a new research paper that explores the economics of intervention into bitcoin’s blockchain.

To be clear, the BIS is the bank of central banks and is the world’s oldest global financial institution, so it is in effect the exact middle-man that bitcoin was designed to disrupt. It currently stands to be the biggest loser should cryptocurrencies gain mass adoption. Or, the biggest beneficiary, should they decide to embrace the new technology. So it’s good to see they’re taking this seriously.

The author, Raphael Auer, has previously advocated the healthy regulation of the cryptoasset space and is extremely knowledgeable about blockchain. In fact, the new paper describes quite perfectly how a 51% attack might play out and even gives a meticulous formula detailing in the attacker’s incentives.

However, the paper makes no attempt to descern the actual numbers to be plugged into their formula. So, even though the BIS seems to be indicating that bitcoin is susceptible to such an attack, current estimates of the costs would be around $7.25 billion for the hardware and another $5 million for the electricity.

Auer’s analysis also concludes that the economics of bitcoin will be very different once bitcoin reaches its maximum supply of 21 million coins, which is expected to happen in the year 2140 and that if there are no significant changes until then the network will be unsustainable. On this point, I completely agree!!

Though my assumption is that the network certainly has the capacity to make the necessary adjustments over the next 120 years until that happens.

At first glance, it might seem as if the BIS is taking a critical stance against Bitcoin by pointing out its vulnerabilities. However in my view, such research only serves to strengthen the network. Only by fully exploring bitcoin’s weaknesses can we act to strengthen them.

Please note: All data, figures & graphs are valid as of January 23rd. All trading carries risk. Only risk capital you can afford to lose.

Global markets are once again tasting fear. Trade talks between the US and China seem to have taken a turn for the worse and though the current treaty in place until March 1st has not been violated, the rhetoric is escalating.

The Bank of Japan meeting didn’t get a great reception from investors this morning. It seems that despite its extremely aggressive intervention in the economy, inflation is still well below expectations.

The Japanese Yen declined moderately against the US Dollar, presumably on the assumption that the BOJ could bolster its current course and inject even more money into an already over-stimulated economy.

This headline kind of speaks for itself and is very likely influencing sentiment today. 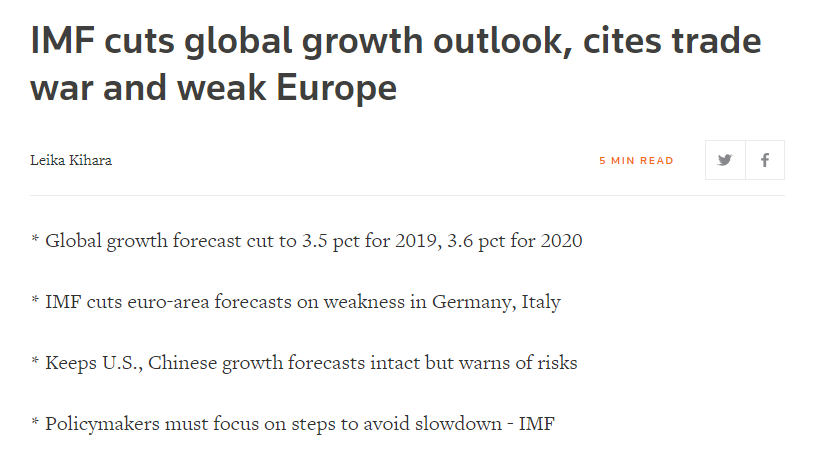 This is the second IMF downgrade in 3 months.

Those of you who’ve been following my twitter probably noticed that we’ve been taking a hard look at market conditions lately.

Though this poll was done in a rather unscientific manner, the sentiment of those who did participate is pretty clear… 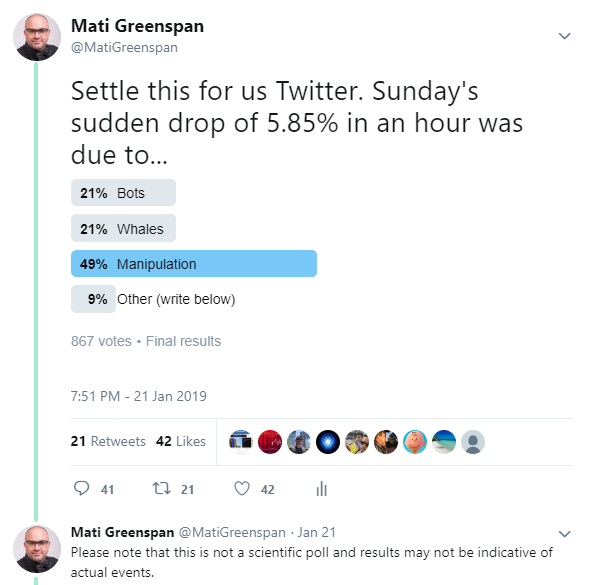 Of the 41 comments, it seems that most people think there is a combination of factors at play here…

Following this, we actually had an amazing opportunity to analyze the conditions at play yesterday as bitcoin experienced a 3% flash crash that lasted about 15 minutes from drop to full recovery. 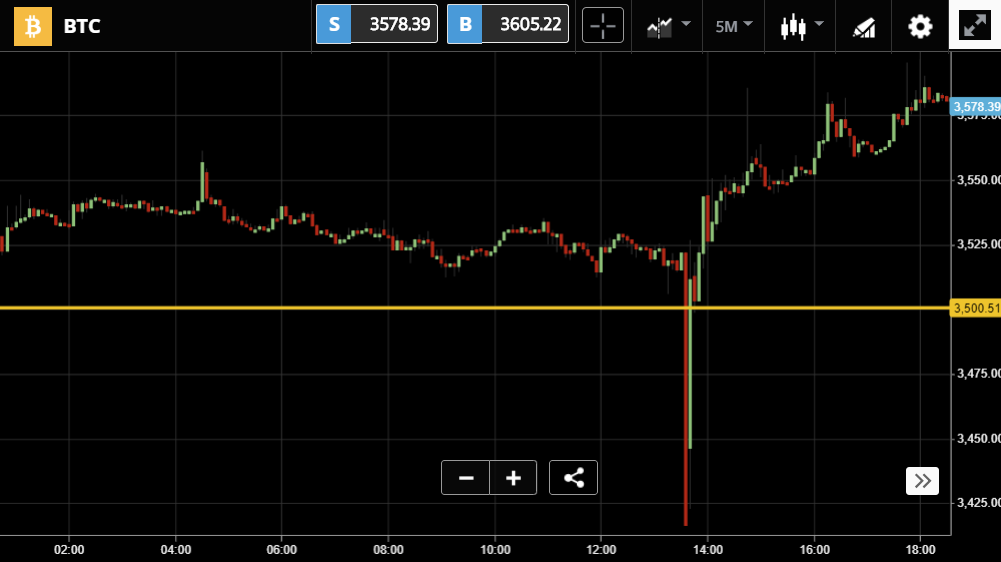 So when the downside broke, it very likely took out a lot of stop losses, causing a chain reaction of stops and liquidations. What’s exciting about yesterday’s move is that the direction was quickly reversed and in the aftermath, we even saw a mini rally. This is a very positive sign and could very well indicate that we’re at or nearing bitcoin’s price floor.

I did manage to comment on this in real time in an interview with BloxLive.TV. You can catch the recording here. (My segment is at timestamp 7:45 of the recording.)

In short, the word “manipulation” implies intention and we have no evidence of that. What we see here are the clear effects of a low liquid market. The same conditions that have caused bouts of extreme volatility throughout bitcoin’s short history. So, sorry to disapoint the crowd but my summation remains that this is just normal bitcoin volatility.