If you’re reading this, you probably agree that the old school financial industry is in need of a shakeup. It seems that Goldman Sachs agrees.

This hit track is a remix of the old Fleetwood Mac song “Don’t Stop Thinking About Tomorrow.”  It was created by Goldman’s incoming CEO David Solomon (AKA: DJ D-Sol). Named after two ancient kings and an angel, Solomon will assume the throne on October 1st.

Current CEO Lloyd Blankfein was famously undecisive about cryptocurrencies, yet over the last few months, it’s become clear that the bank is ramping up their cryptotrading activities in a big way.

Solomon has been a lot more clear on crypto and has gone on record saying that Goldman is focused on crypto due to a high level of demand from their clients.

Please note: All data, figures & graphs are valid as of July 18th. All trading carries risk. Only risk capital you can afford to lose.

President Trump admitted yesterday to making a mistake. After causing a global stir backing Putin over the FBI at the Helsinki summit, Trump has now walked back his comments and even admitted for the first time that he agrees with the assessment that Russia was indeed behind the meddling in the 2016 presidential elections.

Though many remain unconvinced, the markets remain unfazed and instead the focus for many analysts remains on the possibility of a ramped up trade war with China and on the Fed’s actions.

In his testimony yesterday, Fed Chair Jerome Powell did his best not to be political but he did note that the effects of further tariffs would likely be felt throughout the US economy. Today Powell testifies before the House Financial Services committee. We can probably expect further questions from the House regarding the specific reaction the economy might have to these tariffs.

Stocks are rather mixed today but we do have notable moves in the currency market where the US Dollar is gaining strength.

The US Dollar Index is once again bumping up against resistance at 95 points. If this level is passed, it could lead to further gains, especially since the United States seems to be a lot more aggressive than the rest of the world on their plans to raise interest rates.

In line with the stronger Dollar, the metals have continued to decline. Gold is now the cheapest it’s been in over a year.

After more than a month of doing nothing, bitcoin broke out yesterday by rising $656 in 40 minutes, bringing life and optimism back into the market.

Here we can see the strong break above the key resistance level of $6,800, clearing quickly past $7,000 then spending a short time above $7,500 before a retracement.

By looking at the volumes, it seems that the cause of the surge was from some fresh money entering the market. This graph from www.cryptocompare.com shows the incredible volume spike at the time of the surge. 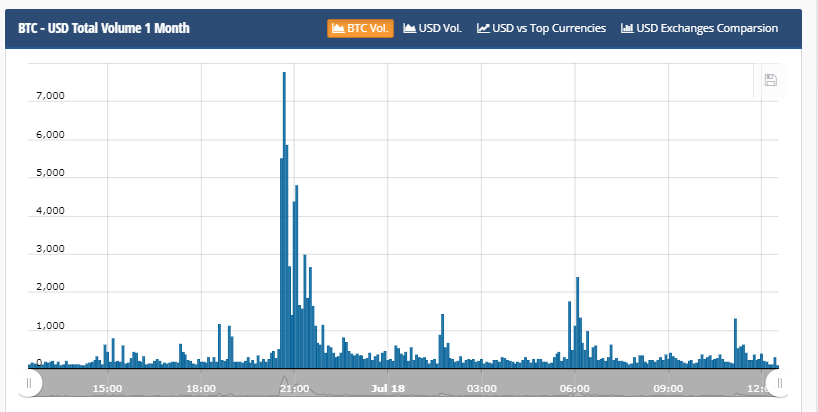 This one shows the volumes by currency. The blue circle is the exact time of the surge. Notice the spike in USD volumes?

Lately, we’ve been noticed a trend that Tether (USDT) has been becoming more prominent in overall volumes. Tether volumes generally indicate crypto traders speculation on the exchanges. The fact that this surge happened on USD and not Tether might indicate that it is due to fresh money coming in.

Today the US Congress is set to hold not one, but two separate hearings regarding cryptocurrencies. This is a clear sign that the US government is taking the crypto industry seriously and it seems the aim of both hearings will be to help not harm innovation in the space.

The double-header comes as the SEC’s mailbox is reportedly inundated with letters from citizens urging them to approve VanEck’s Bitcoin backed ETF at their hearing on August 10th.

Shifting over to Wall Street, it seems that the bitcoin monthly futures contracts on both the CME and the CBOE group will expire today. As we’ve stated before, there is nothing to fear from the expiration of these contracts. The chances that any large player is trying to manipulate the markets using them is very slim.

Just to get a picture of the volumes of these markets, I’ve pulled the following graph from the Bloomberg terminal for you. This shows the daily volumes on the CBOE’s XBT futures since inception.

The small white line shows the average daily turnover, which is just under 5,000 BTC.

Even though the volumes on the CME are higher, it’s less significant for this analysis since they are using a more complex index as a reference rate for contract settlement and thus would be much more difficult for anyone to try and manipulate.

As always, let me know if you have any questions, comments, or feedback. I’m always happy to hear them. Let’s have an excellent day ahead!