Those of you who have been following markets closely these last few weeks have noticed that in addition to me traveling around a lot, a few of the emerging markets have been experiencing turbulence.

The Turkish Lira has been the main focus for many. Erdogan is doing his best to sweet talk the currency upwards this morning and has seen some mild success but the Lira is still on track to see its worst monthly performance in 17 years.

The Peso has dropped more than 100% against the US Dollar since the beginning of the year, prompting the Central Bank of Argentina to introduce what is currently the highest interest rate in the world…. by far. 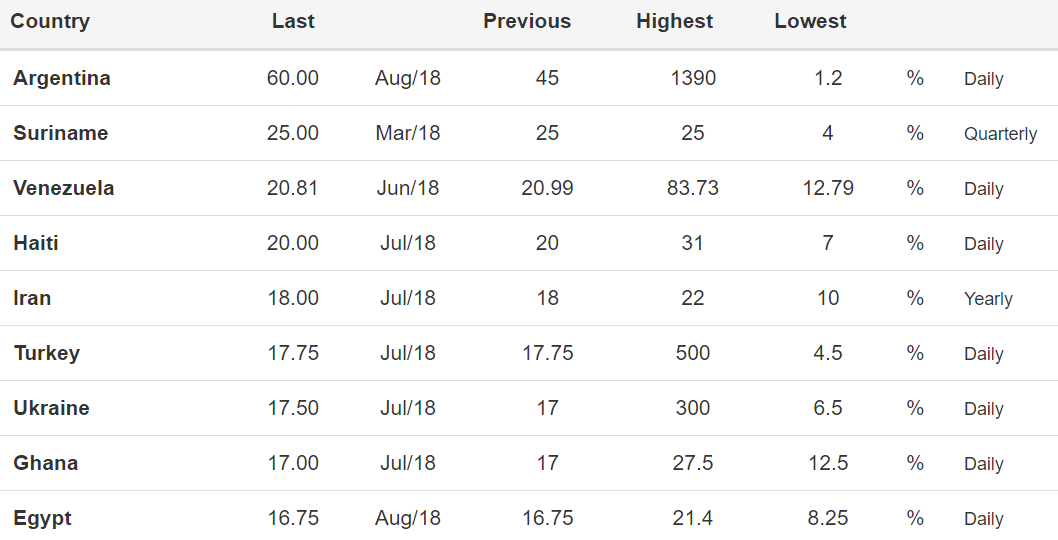 It is in these countries where economic stability is lowest that cryptocurrencies could help most. Argentina, in particular, has turned to bitcoin several times in the last few years during times of economic distress and it seems that with the current currency depreciation, they have every incentive to do so again.

Unfortunately, there will be no daily market update on Monday or Tuesday of next week as I will be travelling. We will resume with the updates as normal from Wednesday, September 5th.

Please note: All data, figures & graphs are valid as of August 31st. All trading carries risk. Only risk capital you can afford to lose.

As far as it seems, we may see a new trade deal for North America today, or sometime this weekend. This ramps up pressure on China as Trump’s consideration of new tariffs on $200 Billion worth of trade looms.

Asian and European stocks have been running red for the better part of the week and  the United States joined them yesterday. Sill, even with yesterday’s down-tick Wall Street is still sitting pretty for the month.

With the Dollar at a decision point, we’re seeing many markets in a period of consolidation. This shouldn’t be confused with relaxation though.

The VIX volatility index has spiked during yesterday’s session indicating that volatility is prevalent at this time.

The crypto markets also seem to be in consolidation mode. The two main outliers are EOS and IOTA, which are both up about 5% over the last 24 hours.

As in the traditional markets at this time, just because the price is experiencing little movement, don’t be fooled. There’s a lot going on under the surface. For example, check out Bitcoin’s transaction rate creeping up over the course of this week.

And, as we highlighted yesterday, the hashrate is starting to pick up.

Wishing you an amazing weekend.