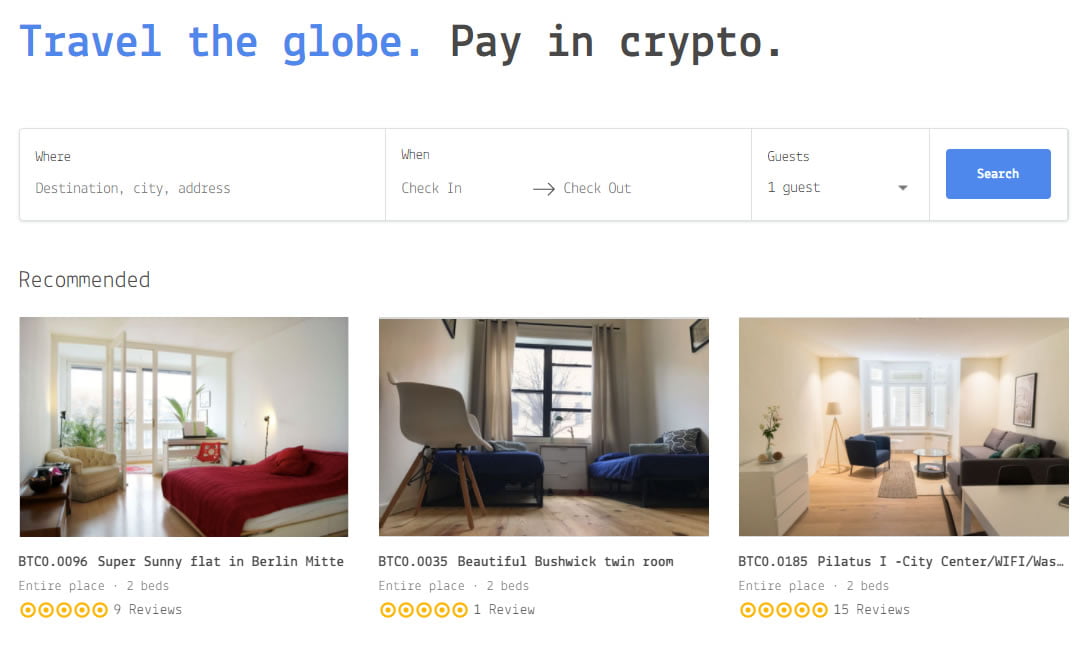 It’s been almost ten years since travel giant Airbnb was established — a move which turned the hotel and rental industry on its head. Now there’s someone new to the party: Ethereum based CryptoCribs. The start-up is still in its early stages, recently choosing to set up shop in the Parisian start-up campus Station F, but it’s already getting travelers in the cryptosphere talking.

One thing that really sets CryptoCribs apart is its non-conventional approach to funding. Top competitor Crypto Bnb, a vacation marketplace that improves short-term rental experiences and enhances search results for the hospitality industry (as per the company’s website), is currently utilizing an ICO to generate funds — CryptoCribs, on the other hand, did not take that route: And it’s working. In just three months CryptoCribs already has listed about 800 properties on its website, and according to Swiss co-founder Erasmus Elsner, this happened “without [CryptoCribs] having to spend a dollar on marketing.”

Although at first glance the company’s site may appear similar to Airbnb, both the technology and philosophy behind it are quite different. CryptoCribs uses blockchain technology, having its database in a decentralized network, so the community of tenants and landlords actually own the database and also have a voice in the management of the platform. As for payments, cryptocurrencies like Bitcoin, Ethereum, and more, are accepted. The fees to use the service are also very attractive. In contrast to Airbnb, where intermediary fees can reach 20%, CryptoCribs initial commission is just 5% — and it gets better: With each booking and positive review, the 5% fee drops by 0.2%.

Elsner, who previously worked for JPMorgan, Rothschild, and UBS, is a prime example of a young generation of idealistic crypto-entrepreneurs. With CryptoCribs not three months into operation, he was already receiving takeover offers and requests by a large hotel chain to rent out rooms through the site. And although deals like that could potentially give a huge boost to the platform, Elsner wants the users themselves to decide whether they agree with such moves. Fortunately, thanks to previous investments in cryptocurrencies like Ethereum, the start-up has enough capital to continue independently regardless of what decisions the platform and its users make in the future.

As for the future, Elsner hopes to continue the concept of disintermediation with the help of blockchain technology. He sums up his philosophy as follows: “I have always traveled extensively and was strongly involved in the crypto community. That’s how I came up with the idea to set up a travel platform where you do not have to pay costs to an intermediary.” One example he provides is the use of “smart keys,” which are linked to the rental contract: Only when you open the door of your rental with such a key will the money will be taken from your account.