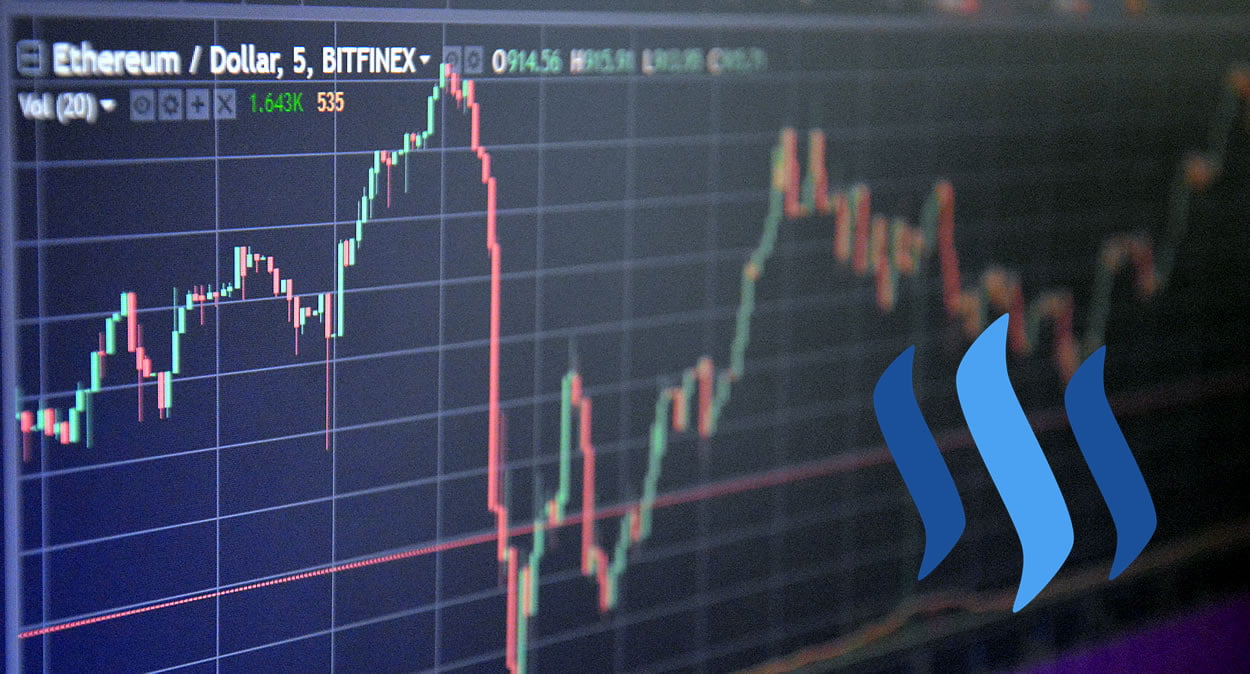 The rout has continued and markets have fallen faster again today. Selling pressure could not be overcome and has accelerated through the morning in Asia with markets tumbling towards $300 billion. Bitcoin has continued to slide falling back 4% on the day to $7,600. In the time tested formula, altcoins have all fallen heavily again today. A sea of red covers the boards once again with only one or two coins showing minor gains. The one not drowning at the moment is Steem.

Coinmarketcap reports that Steem is steaming at the moment, up 8% on the day to $3.22. It was trading at under $3 this time yesterday morning and is showing positive momentum when all other altcoins are crashing. Over the week Steem has seen similar gains of 6% but the uptrend happened a few hours ago. On the month Steem has actually fallen back by 6% from $3.40 this time last month. Against Bitcoin Steem is up 12% on the day at 42000 satoshis from 37500 sats this time yesterday. Weekly gains on BTC have been a strong 16.5% from 35600 satoshis this time last Thursday as the big daddy of crypto has declined.

The price increase in Steem is surprising since South Korean exchange Korbit delisted it among a few other privacy coins a couple of days ago. Conversely China’s crypto ratings report placed Steem at second after Ethereum. According to reports China’s ‘first-rate domestic experts and scholars’ contributed to the ratings, which they calculated on the basis of three indexes: technology, application and innovation. The report came out last week though which would not cause a price pump seven days later.

Steem is currently being traded on Upbit at 33%, Binance at 30%, and Huobi with 18% of the total volume. That trade volume has doubled over the past 24 hours from $10 million to $20 million and it seems to be still increasing. Steem is currently at 26th spot on the market cap charts with $820 million.

Total crypto market capitalization has fallen once again by 5.4% to $335 billion, signals are largely bearish and the selloff looks set to continue. Daily volume however has increased a little over the past 24 hours and is currently at $21 billion. All other altcoins in the top 25 are plummeting during Asian trading this morning, heavy losses have been incurred by Bitcoin Cash, EOS, Bytecoin, and Zcash. Outside the top 25 0x is performing well with a jump of 11.5% on the day, Skycoin is also pumping, up just under 50% at the time of writing.

More on Steem can be found here: https://steem.io/

Tags: Asian trading sessionFOMOFOMO momentssteem
TweetShare
BitStarz Player Lands $2,459,124 Record Win! Could you be next big winner? Win up to $1,000,000 in One Spin at CryptoSlots