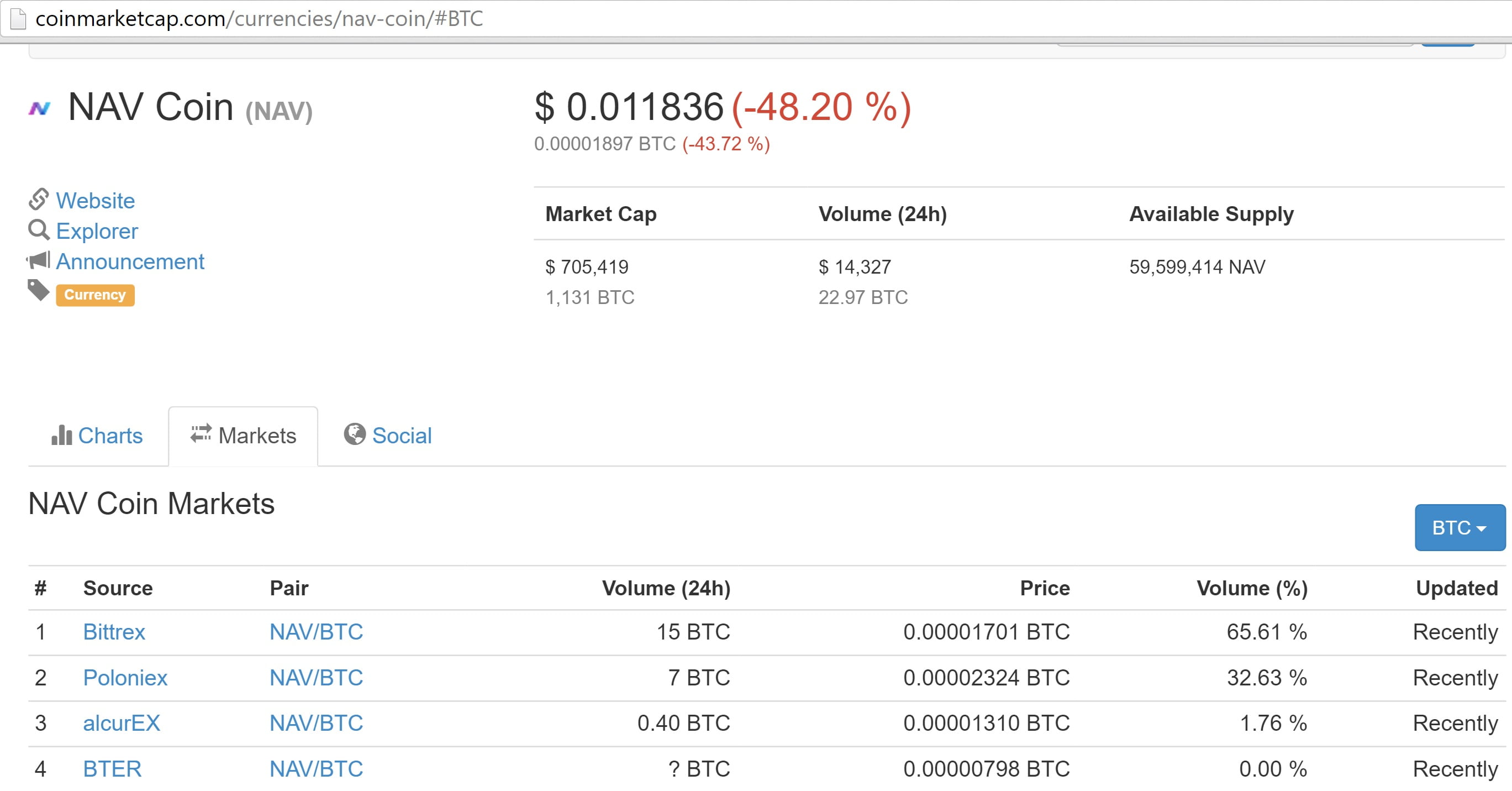 Arbitrage has never been simple. At first glance, it seems like a simple task—buy on one exchange, sell on another—but fees prevent the gap from completely closing, and delays in the deposit/withdrawal process can lead to losses in changing market conditions.

Traditionally, traders needed vast amounts of liquid capital to do this effectively, but cryptocurrency has changed that to a degree. With vastly reduced transaction fees and times, they can be more easily moved across exchanges, making for a more even market. At the same time, their revolutionary nature leads to unique new problems for traders to learn to profit from.

NAV Coin is one of the best examples of this. They call themselves the first “fully anonymous cryptocurrency,” and have an integrated network of servers one can optionally use to mask their identity on the network. While I haven’t researched enough to verify if those servers are double encrypted and run on blockchain technology as claimed, one claim is certainly true: they are (or were) a dark horse.

That changed in April of this year with an announcement on bitcointalk.org, which stated that NAV Coin was being upgraded to include deterministic wallets, passphrase-protected private keys, block size changes, in-wallet messages, trading via Bittrex and a block explorer. Instead of hard forking their blockchain, they decided to start from a new genesis block with the same recorded balances to save development time.

As a result, NAV holders must manually swap their old coins (NAV 1) for new ones (NAV 2), a secure process initially facilitated by the Bittrex exchange and now explained here. Altcoin investors reacted positively to the news, and the price steadily climbed until July 1st, when it skyrocketed as a result of a press release on CoinDesk. On Poloniex, the price reached over 16,000 satoshis.

But there was one problem: through either ignorance or stubbornness, Poloniex never upgraded to NAV 2. What this means is that they are running on a separate blockchain with separate tokens—NAV 1 coins—which are bought and sold on their exchange without affecting the balance of “real” NAV 2 coins. And so a new type of arbitrage began, one uniquely inherent to the world of cryptocurrency: arbitrage across protocols.

The price rose much higher on Poloniex—at one point over 1000%—and is still significantly higher. One way to look at this would be to say that the market values NAV 1 coins more, but that would be naive for a couple reasons. One is that NAV 2 coins are clearly superior, boasting more features, with no community support for NAV 1. More crucial, however, is the ignorance of the average trader: Poloniex is the most mainstream altcoin exchange (hence the greater buying pressure), and many are likely unaware of the NAV 1/2 dichotomy.

The real issue is that NAV 1 coins may be freely converted to NAV 2 coins, but the reverse is impossible. Anyone who swapped their coins early on missed out; they could have profited by depositing them to Poloniex, selling for bitcoins, then buying their coins back on Bittrex. That is, in fact, the only way to to reduce the price of NAV on Poloniex, since you cannot deposit/withdraw NAV between the exchanges because of the protocol differentiation.

This won’t last forever, of course; it has been confirmed that Poloniex plans to upgrade, simply not when. Once that happens, free movement of NAV Coin across exchanges will reduce the price gap to a normal level. Assuming the prices meet somewhere in the middle, the best way to capitalize on this arbitrage opportunity might be to simply buy NAV on Bittrex and wait. Or the price could suddenly collapse… I’ll leave it to someone else to more closely examine the technology and team behind it.

Tags: altcoinsarbitragebittrexblockchaincryptocurrencyday tradingNAVNAV coinpoloniex
TweetShare
BitStarz Player Lands $2,459,124 Record Win! Could you be next big winner? Win up to $1,000,000 in One Spin at CryptoSlots