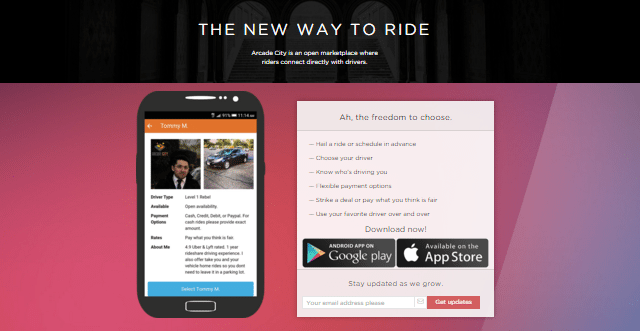 Public transport involving taxi cabs are becoming more personal these days. Gone are the days when people were forced to go out on the street to hail a yellow or black taxi cab. Now, all one needs is a smartphone with the right application installed. The rise of companies like Uber, Lyft, Careem, Ola and others offering on-demand car for hire service has made using taxi cabs a convenient and pleasurable experience.

We can now book a car of choice over the mobile phone while sitting in our living rooms. In no time, the cab will be available at the doorstep ready to take us to the destination of our choice. Services like Uber have become a big hit among commuters across the world. Most of these on-demand cars for hire services use the credit card as the most preferred way of payment, except for few places where they have allowed integration of mobile fiat wallets and even accept cash. However, none of these leading players have included bitcoin payments or blockchain technology so far.

A newbie in the block, Arcade City has beat all established heavyweights to the punch by becoming the first on-demand ride sharing and car for hire startup to work with blockchain technology. Arcade City is the brainchild of Christopher David, who also happens to be the founder of Free Uber group. The ride-sharing application is currently available on Android and iOS platforms.

Arcade City is currently in the process of integrating Ethereum blockchain into its application. The blockchain based smart contracts platform will be used by the company to offer crypto-equity to drivers joining the application. According to reports, the company intends to share the whole equity among drivers by the year 2020.

Arcade City was officially launched on 14th of February 2016, following massive rate cuts by industry leaders Lyft and Uber. The company soon managed to rope in over 3000 drivers onto the platform. Almost all the drivers who joined Arcade City have been formerly driving for Lyft and Uber. Unlike Uber, the platform offers a great deal of freedom to its drivers.

Similar to the decentralized Ethereum platform the company is currently integrating, Arcade City follows decentralized pricing model where drivers are free to have their own rates. In addition, the company also allows them to include additional services without having to worry about company policies.

Christopher David’s plan to decentralize the whole services as well as the company structure is a great idea. Drivers being stakeholders in the company will be motivated to not just offer better services, but also ensure the brand identity and profitability. The Ethereum blockchain can be used to create smart contracts which can be programmed to transfer a certain percentage of equity or earnings to stakeholders as the predefined milestones for the company is reached.

Arcade City now has presence in 27 states across the United States and in Australia. The company is expected to launch its services in Mexico, Canada, and Sweden soon. Arcade City is a perfect example of how decentralization can be beneficial for both individuals and community.

Read our comparison of 50 different crypto casinos. Find out who has most generous bonuses, best UX, knowledgeable customer support and best provably fair games.
Tags: arcade cityblockchain technologychristopher daviddecentralizationethereumNewsride sharing
Tweet123Share196ShareSend
Win up to $1,000,000 in One Spin at CryptoSlots