One of the world’s largest exchanges, Binance, has just revealed that it will be supporting Icon’s (ICX) mainnet within the upcoming week.

Binance has finally announced that it will be swapping the ICX ERC-20 tokens for the official mainnet coins, five months after the official release of the mainnet.

Icon planned for the exchange mainnet swaps to occur earlier this year, but Binance just got around to working on the swap process According to a post on the Icon’s official blog, the Huobi, OKex, Bithumb, and Upbit exchanges are also working on supporting the ICX mainnet. Icon’s team made it clear that they are working with these exchanges to ensure it happens as fast as possible.

To aid this swap, Binance has announced that all ICX deposits and withdraws will halt on June 20th, ensuring that this swap is as smooth as possible. However, it seems that Binance will not cease ICX trading during this transition period, similar to what happened with the EOS mainnet release.

Due to the fact that all trading on Binance is off-chain, there should be no problem with buyer to seller trades on the Binance platform during the token swap process. When Binance begins the token swap, it is expected that the mainnet claim window will last for a total of three months long, giving holders ample time to get the tokens they deserve.

Users will not need to do anything to obtain their mainnet tokens, with Binance handling all of the technical details regarding the swap. Once Binance finishes the swap they will allow for deposits and withdrawals to resume, specifically stating:

We will open ICX deposits and withdrawals again once we deem the ICX mainnet to be stable.

In addition to supporting the token swap, Binance has also announced that they have just opened a USDT/ICX trading pair, much to the surprise of some.

Icon has suffered along with the cryptocurrency market, dropping over 80% since its early January all-time high. Despite the price decline, ICX’s price saw a nice bump when Binance released the aforementioned announcement, beating Bitcoin by over 9% on the day. 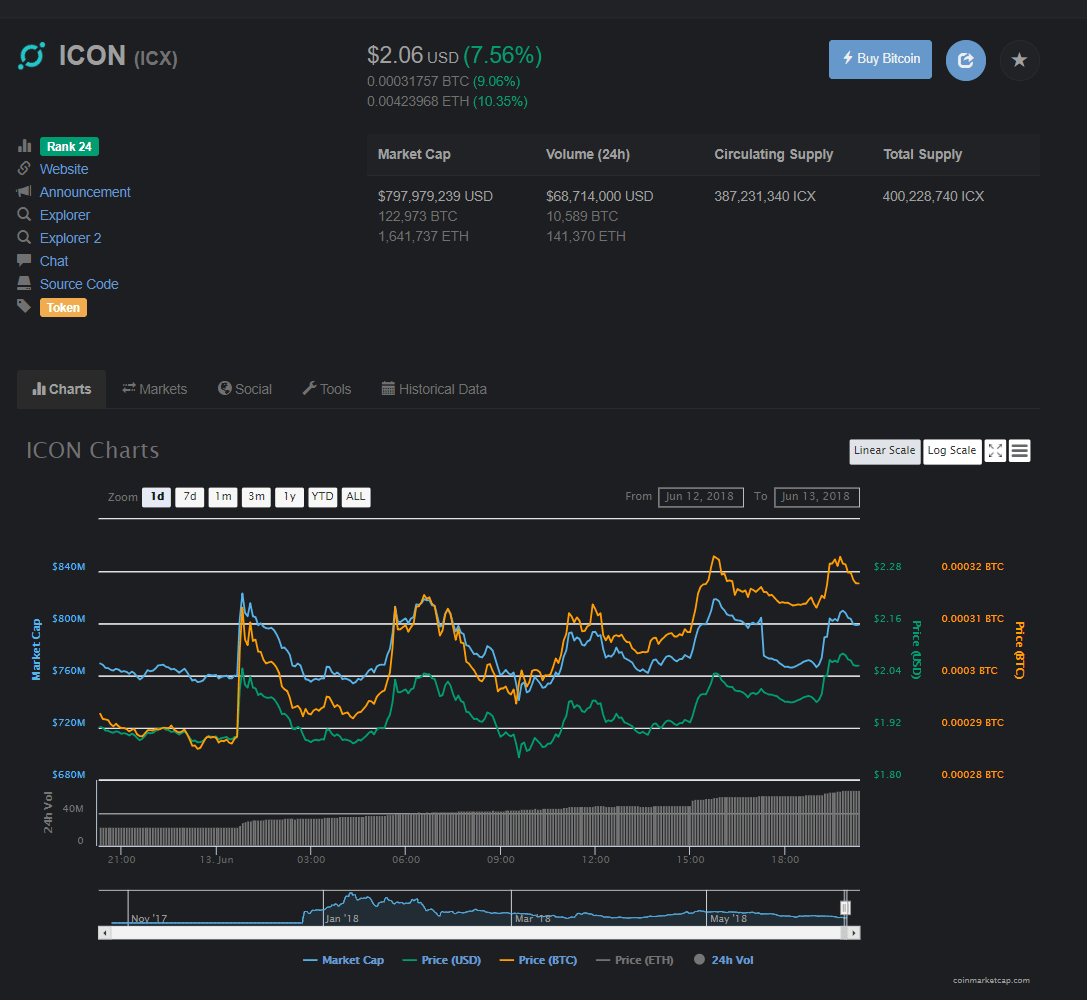 According to CoinMarketCap, ICX tokens are currently sitting at $2.08 U.S. and are up 9% over the past 24 hours.

If ICX holders are still holding the ERC-20 version of ICX in their personal wallets, it is advised that these users transfer them to a mainnet supported exchange to get the full value of the token.

For those who are unaware, Icon is a South-Korean based project that hopes to help connect independent blockchains with one another, so-called interoperability. The topic of interoperability has been a key theme in the industry, with many believing that this characteristic will be essential in future blockchains.

ICX is currently working to connect a variety of top cryptocurrencies projects, including Bitcoin, Ethereum, and Qtum. By allowing different chains to communicate with each other, Icon’s team hopes to allow for decentralized coin swaps and for the increased efficiency and use-cases of existing blockchains.

The token swap is a key part of Icon’s ambitious goals, with the swap allowing for users to obtain tokens on the mainnet chain where extensive development will occur.

Tags: altcoinBinancecryptocurrencycryptocurrency exchangedigital currencyIconICXmainnetMainnet Launch
Tweet123Share196ShareSend
BitStarz Player Lands $2,459,124 Record Win! Could you be next big winner? Win up to $1,000,000 in One Spin at CryptoSlots