Bitcoin has continued to flatline for the umpteenth week in a row. As of this article’s writing, the leading cryptocurrency trades just a few basis points below $9,200. Despite the unpredictability of this market, a cryptocurrency trader remains certain that a move higher is likely.

According to a July 17th analysis of the total market capitalization of the crypto market by trader Michaël van de Poppe, there are four signs signaling upside:

Van de Poppe isn’t the only one that thinks Bitcoin will soon move higher.

Volatility should continue declining as Bitcoin extends its transition to the crypto equivalent of gold from a highly speculative asset, yet we expect recent compression to be resolved via higher prices.

He added in a separate analysis that Bitcoin should trade above $12,000 due to a strengthening on-chain case.

Investors are seemingly responding to the expectations of upside by accumulating.

As reported by NewsBTC previously, exchange reserve data shared by Crypto Quant indicates that Bitcoin is in a macro accumulation range. As the data company’s CEO explained in regards to the chart below:

“We are in the #BTC accumulation phase. The 30- and 90-day moving average gap of all exchanges’ reserve represents the downside risk. It hit a record low in May this year and is still below zero… Looking at the history of Bitcoin since 2015, we can see that whenever it touches zero or going negative, the downside Risk decreases, meaning the accumulation phase.” 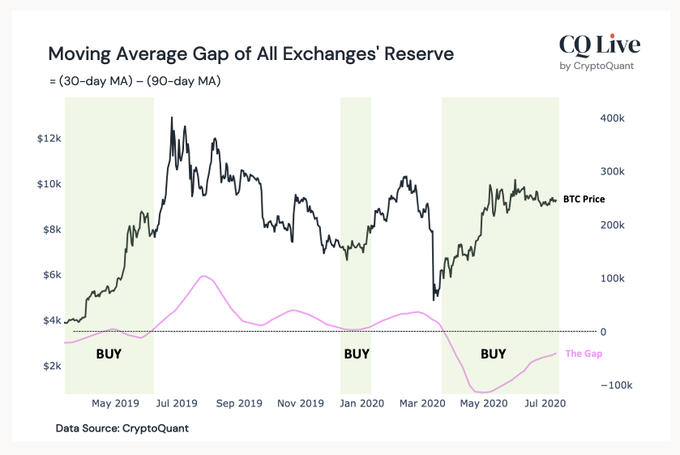 The existence of a strong accumulation mindset been corroborated by poll statistics shared by the analyst “PlanB.” The analyst shared last week that approximately three-quarters of Crypto Twitter is either HODLing or buying Bitcoin, while only 13% are selling.

Not to mention, data suggests that the number of addresses holding at least one BTC is continually reaching new all-time highs. This comes in spite of the March shakeout and the ongoing consolidation.

Tags: bitcoin pricebtcusdBTCUSDTxbtusd
TweetShare17
BitStarz Player Lands $2,459,124 Record Win! Could you be next big winner? Win up to $1,000,000 in One Spin at CryptoSlots