Authority in Bitcoin: What Role Does It Play? 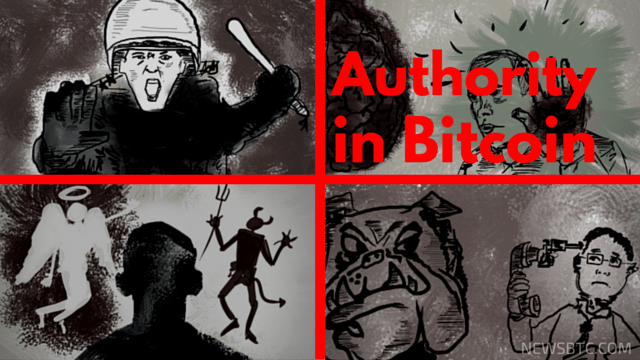 In case you weren’t aware, Bitcoiners hate authority. It is the central thing we want to avoid in finance, as well as any other industry that can be placed on the blockchain. We consider it inefficient, immoral, and just plain wrong.

This makes sense for an anarcho-libertarian movement, but even anarchists have people they listen to. Merriam-Webster defines authority as “the power to give orders or make decisions,” a vague description that doesn’t describe how such power is acquired or what the consequences are. If we’re going to rail against authority all the time, we should really do better.

In reality, there are many different types of authority, some more subtle than others. While Bitcoin does an admirable job of resisting control, even the blockchain and peer-to-peer technology cannot fully prevent corruption. Here I’ll explain who they are, how they work, and what influence they have over the Bitcoin network.

Violent authority is that wielded by police officers, the essential basis of all government control. If you fail to submit to other disincentives such as fines, you have to deal with them–the enforcers of the ruling class. Disobeying such people gets you restrained, beaten or worse, and more than any other type of authority, you are forced to comply.

Good news, though: this is the type of authority to which Bitcoin is most impervious. There is no central server to confiscate, so destroying the network would require them to take every node or miner in the world at the same time. Like the hydra of Greek lore, cutting off one head of the beast just causes another to grow in its place.

If development of such technology was simply banned, it would go underground. As Satoshi has proven, it’s possible to release a program without revealing one’s identity. Pseudonymity also makes it extremely expensive to target users, who can buy and sell bitcoins with cash to insure a continuous money supply. Violent authorities need to know who you are and where you live to be effective.

That’s why software piracy remains so ubiquitous: it’s in the nature of decentralized technology to proliferate. Violent authority will probably be less prevalent in the future, as new decentralized technologies come to obsolete and replace it. It will likely only be wielded as a last resort against others who try to use it, such as thieves, rapists and murderers.

This authority is typically known as “your boss”: if you don’t do what he says, he’ll fire you. Phrased that way, many libertarians might disagree with the concept, as it doesn’t technically violate the non-aggression principle. Theoretically, you could just find a new job or start your own enterprise if you disagree.

That’s easy to believe if you are either young or wealthy, which many Bitcoiners are. But suppose you can’t line up another job in time and don’t have any savings. Then if you have medical expenses or a family to feed, quitting is not an option, and your boss commands the same respect as if he’d asked you with a gun in his hand.

This power has sinister applications that can negatively impact the greater good. When a lobbyist tells a politician he’ll lose campaign funding if he doesn’t enact certain legislation, the lobbyist is wielding coercive authority. This may translate directly into violent authority over third parties, as can bribing a judge or hiring a hitman.

In the Bitcoin system, such coercion can cause serious arguments amongst the developers. Gavin Andresen is beholden to MIT, which funds him and two other developers as part of their Digital Currency Initiative. Many of the remaining developers are working on the Lightning Network, which settles transactions off-chain thus giving them a financial interest in smaller block sizes.

The free market is capable of resolving such disputes, however. Development spats lead to “forks” in the network, and community backing will go to the fork that keeps their interests in mind. Bitcoin miners are financially compelled to ensure it functions normally by block rewards and deflation, and acquiring enough hashing power to out-muscle them could cost over $100 million at existing hardware prices, which would probably skyrocket.

Moral authority is when you listen to someone not because you have to, but because you want to. It doesn’t sound like much, but it can be a very powerful force.

Moral authority is how Gandhi overthrew the British, and how Martin Luther King ended segregation. It is exerted via rousing speeches and civil disobedience, inspiring people to act in accordance with their world views. If someone shows sufficient moral character, others will be driven to follow them.

Disobeying a moral authority makes normal people feel guilty, which can cause extreme distress. Often times, they are compelled to make amends to alleviate the discomfort. This is because moral authorities know how to manipulate others’ feelings of empathy, which can literally make you feel another person’s pain. This effectively neutralizes your own authority.

Morality is relative, however. Its wielders are also adept at instilling outrage, which can have more aggressive consequences. Adolph Hitler was using moral authority when he blamed the Jewish people for Germany’s problems, which led to one of the worst atrocities of all time. That’s why hate speech is a crime in most jurisdictions.

Every community has moral authorities. A good example in Bitcoin is Roger Ver, who ironically appeals to anarchist sentiments with anti-authoritarian language. If he convinced his followers that Bitcoin doesn’t promote liberty, or that governments are ethical, cryptocurrency would lose critical support and momentum.

He’s won’t argue that, of course, given his audience and political disposition. It’s a common debate in mainstream politics, however, which affects Bitcoin’s wider adoption: in order to truly compete with fiat, it needs to win the hearts and minds of the masses. Thankfully, people are growing more educated every day.

Intellectual authorities are often trusted advisers to governments and corporations, and thus can wield a lot of power. They can also appeal directly to the masses as bloggers, commentators and authors, indirectly impacting our behavior by molding our world views. Andreas Antonopoulos is a good example in the Bitcoin world.

Even this has potential for abuse, however. Intellectual authorities can be wrong, too; sometimes, they are even wrong on purpose for personal gain. A trusted expert on the stock market, for instance, could use his authority to promote a worthless asset in his portfolio and then sell before the resulting bubble pops.

Whether intentional or not, such false analyses have contributed to all of the worst market crashes in history. Take the wrong medical advice, and you could die. You can’t be an expert on every subject, so it’s of crucial importance to pick others that you can trust.

This is the type of authority to which Bitcoin is most vulnerable, as it questions the protocol itself. We’ve taken the core developers’ words for it that there is no undiscovered math trick that could cause you to lose your bitcoins; if everyone is wrong about how cryptocurrency works, then its resilience against other forms of authority could be a myth.

The open source community is mostly transparent, however, and constantly reviews itself for accuracy. The same market forces that would oust the developers for being bribed would do so for being incompetent, as well. We are essentially questioning the validity of science and mathematics, which are the foundation of human progress.

Bitcoin is extremely resilient to the influences of authority, but not completely. Violent authorities lack the technological means to stop it; coercive methods are too expensive, and barring a declaration of abolition by major world religions, no moral authority of sufficient power will arise to challenge it, either.

The most powerful authorities in Bitcoin are intellectual authorities, whom we trust to teach us how the blockchain and P2P networks work. Our movement is founded on brilliant technological innovation, the failure of which would immediately render bitcoins worthless. Bitcoin’s strength is in how it works, and so is vulnerable to the threat of improper design.

That’s why it’s important for the Bitcoin elite to be diverse and accountable. If the core Bitcoin client fails, there are plenty of developers eager to replace the primary team or prop up an alternative cryptocurrency instead. We could even invent something to replace the blockchain paradigm, and continue essentially the same crusade under another name.

The only person with real power over Bitcoin is Satoshi Nakamoto, who possesses all non-violent types of authority. Being its pseudonymous inventor makes his (or her) intellectual authority over the blockchain hard to question, and his visionary campaign against central banks makes him the community’s ultimate moral authority, as well. He also is likely to have a lot of bitcoins, which he could dump to crash the price, but–like most Bitcoiners–this author believes he won’t.