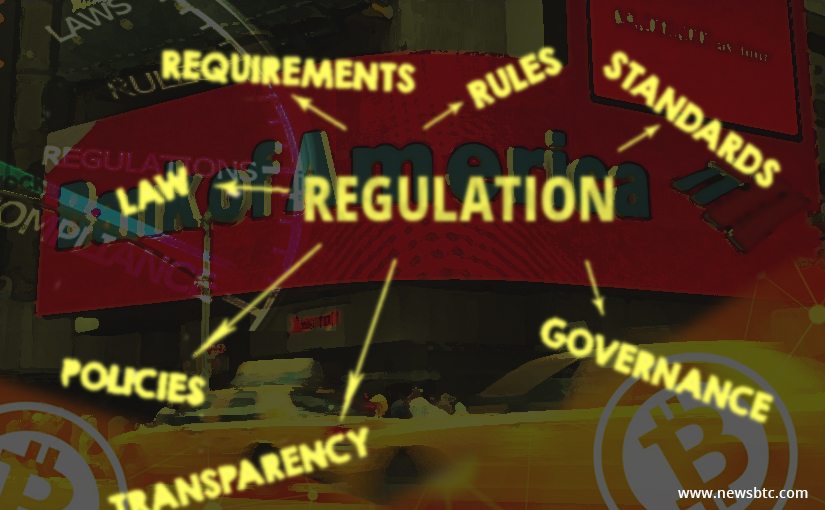 The topic of Bitcoin regulation has been touched upon multiple times already. It is very difficult to regulate something without a central authority. Despite these discussions, some people still think Bitcoin needs regulation to thrive properly. Bank of America Merrill Lynch feels Bitcoin can’t succeed without some regulatory guidelines. At the same time, the world’s leading cryptocurrency has done quite well for itself without any guidelines. The success of Bitcoin isn’t linked to governments or banks, that much is evident.

As is to be expected, there are some key issues regarding Bitcoin people like to rehash every single time. Francisco Blanco, Bank of America head of Global Commodities and Derivatives Research, touched upon some of these subjects. More specifically, he feels a fraud, hacking, limited acceptance, and the lack of regulation is holding Bitcoin back. It is certainly true institutional investors wanting more convenient access to cryptocurrency. A Bitcoin ETF, for example, would introduce a lot of people to cryptocurrency.

Bank of America Runs out of Fresh Arguments

However, saying the future of Bitcoin hinges of regulation is a different matter altogether. Cryptocurrency is designed not to be regulated in the traditional sense. The best government can do is regulate service providers, such as exchanges and wallet services. Bitcoin users themselves may see taxation guidelines, but not every country will look at cryptocurrency in the same way. Otherwise, we would see more countries considering Bitcoin as a taxable currency. Japan even recently removes its consumption tax on Bitcoin altogether.

It is not surprising to see Bank of America demand more Bitcoin regulation. After all, cryptocurrency is the one tool designed to make banks practically obsolete. That is, assuming enough people adopt cryptocurrency in the future. For now, there is a limited degree of adoption. Regulatory guidelines will not necessarily change that situation by any means, though. A free market is impossible to regulate, that much is evident. Bitcoin can survive without centralized services regulated by governments as well. The Bank of America spokesperson handily forgets that fact, by the look of things.

At the same time, some degree of regulation wouldn’t be horrible. That also means a lot of countries would need to recognize Bitcoin as a currency, though. That will not happen anytime soon, by the look of things. Statements like those by the Bank of America carry little weight these days. It also shows how most people remain unaware of how Bitcoin itself can’t be regulated. There is no CEO or President of Bitcoin to keep under their thumb by any means.