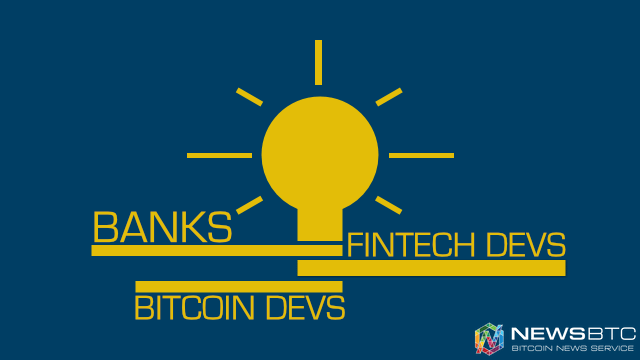 Banks Need to Collaborate with Bitcoin and Fintech Developers

Banks and other established financial players have not taken a liking to Fintech and digital currency just yet, as they see both industries as major competitors to their offerings. While it is certainly true Bitcoin and Fintech can bring significant improvements to the table, they should be seen as complementary allies who will bring success to the banking industry. Or that is what the Monetary Authority of Singapore seems to be thinking, at least.

Embracing Bitcoin and Fintech as a Bank is Necessary

There is no denying the banking sector has seen very little to no real innovation for quite some time now, opening the door for other players to step in and offer something entirely different. In fact, a lot of financial experts see Fintech and Bitcoin as two major threats to the banking system, which would explain the vocal opposition to any solution that is not controlled by a bank or government.

But the Monetary Authority of Singapore sees things different, as they feel both Fintech and Bitcoin are capable of complementing the current financial infrastructure, rather than be competing with banks. A combination of traditional banking with innovative technology and services has the potential to create a powerful and versatile financial ecosystem all over the globe.

Fintech startups and entrepreneurs are renowned for thinking outside of the proverbial box when it comes to accessing financial services. Particularly where the money lending and peer-to-peer aspect is concerned, most Fintech companies have a leg up over their more traditional counterparts. But that does not mean these startups are looking to overthrow the banking system, although they might be able to in the long run.

Any bank that is too slow – or simply unwilling – to innovate will be left behind in the long term, though. Collaborating with Fintech players is a far more preferable solution to this alternative, although it may involve swallowing some of the pride that are associated with the banking system. Fintech companies are, by design, more capable of embracing new and advanced technological features, which makes them invaluable allies for traditional banks.

A Senior Regulator of the Monetary Authority of Singapore stated:

“MAS’ approach to fintech is to use the power of technology to help banks to succeed. It’s not a game of disruptors versus enablers. We see fintech as an enabler… The good news is fintech companies by design are creating far superior technology products, and where success lies is in partnering with banks, and enabling banks to succeed.”

But Bitcoin has a role to play in the financial world as well, although this system is completely outside of the control of banks and governments. Despite those barriers, the popular digital currency is available in every country in the world, allowing for frictionless and real-time transfers of value, regardless of previous access to financial services by consumers and businesses.

So far, most of the major banks around the world have tried taking a page out of the Bitcoin playbook, by trying to develop their own blockchain technology solutions. But that is not all, as several countries are considering to issue their own digital currency, rather than embracing Bitcoin. Whether or not that will be the right decision, in the end, remains to be seen.

It will take time until banks come around to the idea of embracing Bitcoin or Fintech, though. Banks need to innovate at an accelerated pace, yet are unable to do so on their own. Allowing third-party developers to work together with the bank through API access would be a significant step in the right direction as there is valuable input to be gathered from the Bitcoin and Fintech industries.

Tags: banksBitcoin newsCollaborationfinancefintechInnovationNewstechnology
Tweet123Share196ShareSend
BitStarz Player Lands $2,459,124 Record Win! Could you be next big winner? Win up to $1,000,000 in One Spin at CryptoSlots