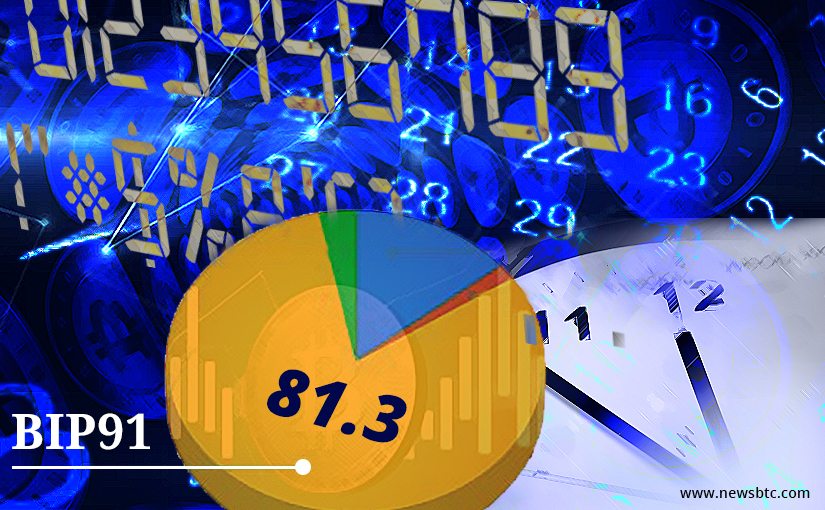 Bitcoin users are keeping a close eye on the BIP91 proposal right now. In fact, it is the only proposal actively preventing a Bitcoin chain split right now. This particular solution makes SegWit2x and BIP148 compatible with one another. That is quite significant, as they will activate within 24 hours of one another. The bigger question is whether or not BIP91 can gain enough traction in the coming days.

Support for BIP91 is certainly on the rise as we speak. Various mining pools are actively signaling support for this solution right now. Do keep in mind BIP91 needs 80% hashrate support or more before it can effectively be locked in. That means it needs 269 BIP91-compatible blocks to be mined in the 336-block signaling period. That is quite a substantial amount, but it appears we are slowly getting there. That is, assuming this level of support keeps up.

BIP91 Signaling is on Track to Secure the Lock-in

More specifically, 21.5% of the last 1,000 blocks signal for BIP91. That is not even close to the required 80%. Then again 81.3% of blocks mined over the past 24 hours support this solution as well. Some larger pools are still holding out for now, but it seems that won’t matter all that much. It is rather strange to see some pools not support this solution right now, though. Scaling Bitcoin without a chain split should be in everybody’s best interest.

It will be interesting to see when BIP91 will reach its lock-in threshold. If one big mining pool stops signaling it, we will be back below 80% pretty quickly. Given the shenanigans we have seen from various pools ever since the scaling debacle began, that outcome is not unlikely. Some pools like to play games with the rest of the Bitcoin community. Assuming that will happen again, locking in BIP91 may never happen in the end. After all, we have less than two weeks to see it get locked in, which means time is of the essence.

Among the pools not effectively signaling BIP91 are F2Pool, Slush, Kano, BitFury, and GBMiners. It is important to note BitFury will start signaling for this proposal soon, though. For some reason, the pool needs slightly more time to do so. Then again, they are committed to the cause, which is good to see. All of the other pools mentioned have issued no official statement as to what their plans are moving forward. It may not matter in the end, though, but only time will tell what will happen by August 1st.

Tags: BIP91bitcoinBitcoin NewsMining Pools
TweetShare
BitStarz Player Lands $2,459,124 Record Win! Could you be next big winner? Win up to $1,000,000 in One Spin at CryptoSlots