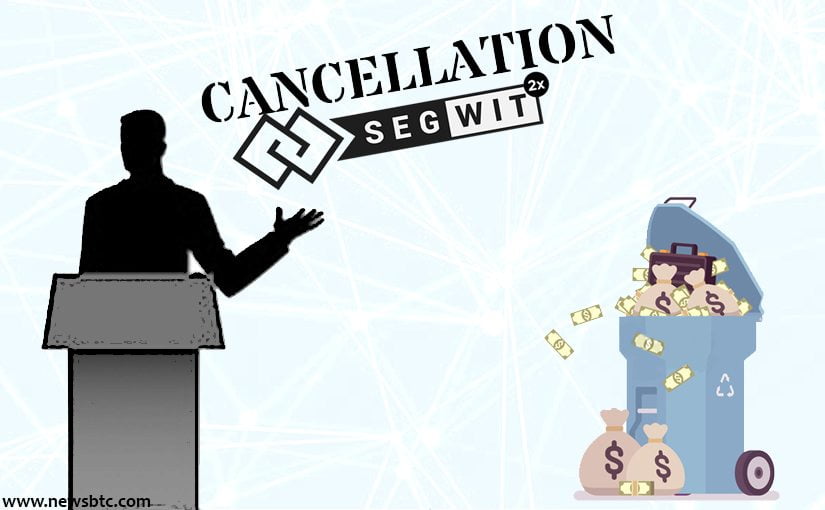 Highly regarded Bitcoin Core developer and cryptocurrency consultant Peter Todd has criticized the cancellation of the SegWit2x hard fork and the “waste” of resources used throughout the development of the software.

On November 8, the development and deployment of the SegWit2x hard fork were officially terminated, with the release of an official statement from BitGo CEO Mike Belshe to the SegWit2x Mailing List. The statement was co-signed by leading businesses within the bitcoin industry which participated in the original NYA or SegWit2x agreement, which included ShapeShift CEO Erik Voorhees, Blockchain CEO Peter Smith, Xapo CEO Wences Casares, and SegWit2x lead developer Jeff Garzik.

“Our goal has always been a smooth upgrade for Bitcoin. Although we strongly believe in the need for a larger block size, there is something we believe is even more important: keeping the community together. Unfortunately, it is clear that we have not built sufficient consensus for a clean blocksize upgrade at this time. Continuing on the current path could divide the community and be a setback to Bitcoin’s growth. This was never the goal of Segwit2x.”

As explained by Belshe, the initial objective of the SegWit2x team and its supporting companies was to carry out an upgrade on the Bitcoin protocol, without pursuing a contentious fork that could lead to the creation of a new cryptocurrency, like the Bitcoin Cash hard fork in August. However, over time, as the community continued to reject the SegWit2x software, the lack of consensus amongst businesses, developers, users, and miners within the bitcoin sector made it virtually impossible to carry out a smooth upgrade.

Immediately after the cancellation of the SegWit2x hard fork was confirmed by ShapeShift CEO Erik Voorhees and BitGo engineer Jameson Lopp, Todd criticized the amount of resources and capital that were allocated to develop the SegWit2x software. He said:

“The 2X cancellation email was signed by Mike Belshe, Wences Casares, Jihan Wu, Jeff Garzik, Peter Smith, and Erik Voorhees, in case you were wondering who to send the bill for the millions of dollars worth of engineering time wasted on this mess.”

Whether the resources that were allocated into the development SegWit2x was a waste will be proven in the upcoming months. If SegWit2x has led the community to re-evaluate the necessity of onchain scaling given the high fees of the Bitcoin network at the moment, developers and businesses behind SegWit2x could consider the movement as a success.

In the meantime, businesses will likely move on to adopt and integrate SegWit, to allow users to experience reduced transaction fees SegWit provides. ShapeShift has already integrated SegWit, which was an important step for bitcoin considering that ShapeShift solely accounts for around 3 percent of the Bitcoin network’s transactions.

In the upcoming months, major companies like Bitfinex and Blockchain will likely integrate SegWit. Bitfinex has stated that SegWit integration is in progress.

Tags: bitcoinBitcoin CoreBitcoin Newsbitgoblockchainblockchain technologyhard forkpeter toddSegWit2xShapeShiftxapo
TweetShare
BitStarz Player Lands $2,459,124 Record Win! Could you be next big winner? Win up to $1,000,000 in One Spin at CryptoSlots