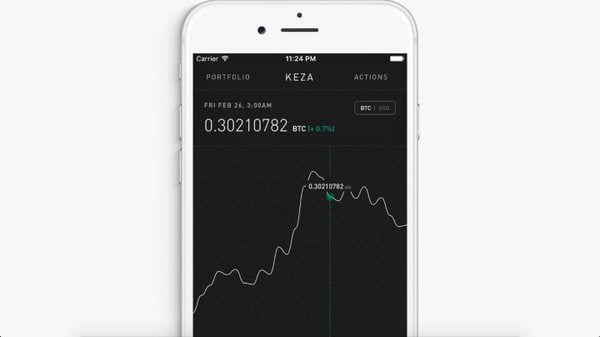 The world of Bitcoin startups is no guarantee for quick success, as the Keza team found out the hard way. Although they had a solid business model, the app has been forced to shut down their offering effectively immediately.

On the surface, the business model for the Keza project was quite appealing. Bitcoin users would be able to invest in US stocks from just about anywhere in the world. Additionally, the team engineers had created a mobile app for iOS users not too long ago, which would put the company on the global map.

Part of the Keza offering was to attract all types of Bitcoin investors, regardless of their previous experience. Portfolios could be created based on the risk factor, although riskier options gave access to much more volatile assets. By using Bitcoin, investors all over the world could track their investments in a convenient way.

Moreover, the Keza mobile app had no deposit minimum, which made it quite appealing to everyone in the world. The company expected most of their platform users to come from emerging markets, where access to proper investment vehicles is very restricted. But as it turns out, their offering still hit some glass ceilings, forcing them to shut it down completely a few days ago.

“Thanks for Your Support. The Keza project is no longer moving forward, we appreciate all the feedback we have received from beta users. Please direct any questions to [email protected]. “

It is always a shame to see Bitcoin companies fail, especially during their beta testing period. Additionally, the company did not provide too many details as to why this decision was made, stunning everybody in the Bitcoin world with surprise. Speculation is running wild on Reddit as to why this decision was made, ranging from regulatory issues to funding problems. There is very little point in coming up with explanations until company officials decide to share the real reasons for this shutdown.

Many people in the Bitcoin community feel Keza had a lot of potential to become a Bitcoin killer app, which would put the cryptocurrency ecosystem on the map. From what we can tell, all beta testers have had their bitcoins refunded to them without going through a reimbursement process.