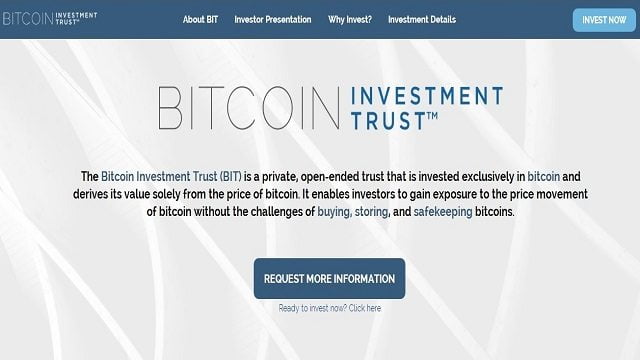 Whenever a company in the Bitcoin space reaches a significant milestone of investment, there are those who oppose the entire idea of using digital currency in the first place. Bitcoin Investment Trust (OTCMKTS: GBTC) recently released some details on how they surpassed the US$65m mark regarding investments. Shortly afterwards, an article was posted on Seeking Alpha, mentioning how Bitcoin Investment Trust is the “Dumb Investment of The Week”. Quite a clash of statements to say the last.

People active in the world of Bitcoin and digital currency may know the name Bitcoin Investment Trust, as this company is publicly trading on the OTC markets under the GBTC ticker. Moreover, the company can also be found on the ARK Web 0.x ETF , which is traded on the Nasdaq exchange.

What makes the Bitcoin Investment Trust so appealing to investors is the concept of being the first publicly quoted securities deriving value from the Bitcoin price only. Keeping in mind how the Bitcoin price can be quite volatile at any given time, there is a lot of potential for big gains – or big losses – which are not uncommon in the traditional stock markets either.

However, investors would not have to worry about the hassle of buying and storing Bitcoin themselves, as they can be exposed to the Bitcoin price movement through a traditional investment vehicle. Combining traditional finance with Bitcoin and digital currency is a concept a lot of people are very excited about, which might explain the recent announcement by Bitcoin Investment Trust.

Based on a recent Medium post by Brian Cohen, it appears as if Bitcoin Investment Trust has gathered over US$65m in investments so far. This shows there is a definite demand for the services provided by this company, although not everyone will see it that way. Keeping in mind how the company filed an SEC form for close to US$62m in March of last year, there is a substantial growth for Bitcoin Investment Trust.

While close to US$4m might seem like a significant amount to some people, it is important to keep in mind how investors can cash out through the GBTC vehicle. The ticker traded at US$52 – a decline by roughly 3% – last Friday, Whether or not this is a sign of people cashing out, is unknown at this time. Brian Cohen’s calculations show GBTC is valuing Bitcoin at a premium rate of 25%, which is quite high.

Why Should You Invest in Bitcoin

The fine people over at Seeking Alpha posted some interesting counter arguments as to why people should not invest in Bitcoin Investment Fund. Even though they openly admit they do not like Bitcoin or digital currency, as it will ultimately fail as a currency due to inherent flaws. Calling bitcoins the “Dumb Investment of the Week” seems to be a sign of shortsightedness, but that is a topic of debate for a different time.

Some people fail to realize Bitcoin is entirely different from traditional finance, and comparing apples and pears will only be viable up to a certain extent. Concepts such as “currency” and “intrinsic value” are very different in the digital currency realm. In fact, “currencies” and “vehicles with intrinsic value” are not doing too well in traditional finance either right now, which makes them an equally dumb investment right now.

Ben Strubel posted his thoughts on the Seeking Alpha blog, explaining how the limited coin supply of Bitcoin will make it difficult to use as a currency. However, he makes no mention of Bitcoin being divisible up to 8 spaces behind the decimal, now how it was never the intention to have every person on this planet to hold one Bitcoin. While some of his other points touch upon valid subjects, this is clearly a matter of different opinions.

Tags: bitcoinbitcoin investment fundbitcoin pricedigital currencyetfgbtcNewsOTCsecSeeking Alpha
Tweet123Share196ShareSend
BitStarz Player Lands $2,459,124 Record Win! Could you be next big winner? Win up to $1,000,000 in One Spin at CryptoSlots