Bitcoin Will See a “Monster Breakout” in the Next Three Days: Analyst At long last, Bitcoin has begun to move. In the past hour as of this article’s writing, the leading cryptocurrency has jumped up by $150 — BTC now trades at $9,320.

While a move welcomed by bulls, it’s far from the explosive breakout that some were expecting. Case in point: volatility indicators, which barely notice 1-2% moves here and there, remain at multi-year lows. By some measures, in fact, volatility in the Bitcoin market is the lowest since 2017’s explosive rally.

Analysts remain certain that the explosive breakout is near, citing these volatility indicators.

Fortunately for bulls, there seems to be a growing case for Bitcoin to continue higher after its $150 rally on Tuesday morning.

Bitcoin Will See a “Monster” Breakout

According to a cryptocurrency trader, Bitcoin will see a “monster breakout” in the next three days as prices continue to tighten on a macro scale.

He shared the chart below along with his strong assertion. It shows that per the Bollinger Bands, a key technical indicator denoting volatility and key levels, BTC’s price action is extremely tight. 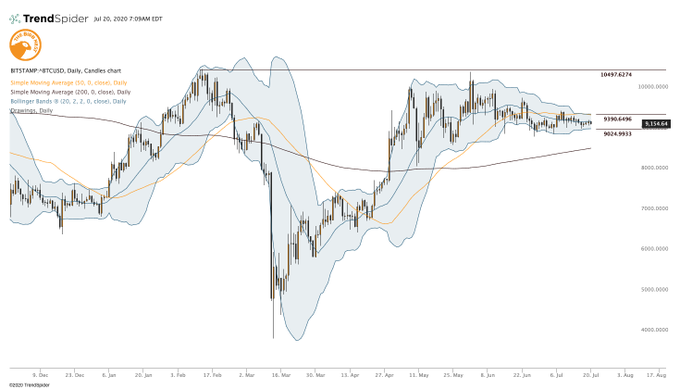 Separate analyses of the Bollinger Bands indicator have found that they are at their tightest levels since November 2018. What followed the consolidation, of course, was a 50% drop over the span of two weeks that ended the bear market.

This suggests there will be an imminent move of macro proportions, likely to play out within the next week or two.

Bulls Are In Control?

Volatility indicators do not indicate which way the leading cryptocurrency will break. But with this latest news and new analyses, a growing number of traders are betting on the case for upside.

KI Young Ju, the chief executive of cryptocurrency analytics firm CryptoQuant, shared the charts below on July 20th. Attached, he wrote that there are three on-chain indicators signaling investors to “BUY.” These indicators are as follows:

On-chain Indicators Status: BUY 🟢
– Miners are not selling (based on MPI, Miner Outflows)
– No significant #BTC exchange inflows from whales so far
– All exchanges' reserve hit the year-low a month ago and keep that low pic.twitter.com/IzEmujvbsU

“#Bitcoin Hash Ribbons “Buy” signal just confirmed. The post-Halving signal is particularly special.  It will probably be a very long time until the next occurs. …and so the great bull run begins.”

This signal is important as it has preceded every one of Bitcoin’s parabolic rallies in the past decade.
Tags: bitcoin pricebtcusdBTCUSDTxbtusd
TweetShare
BitStarz Player Lands $2,459,124 Record Win! Could you be next big winner? Win up to $1,000,000 in One Spin at CryptoSlots