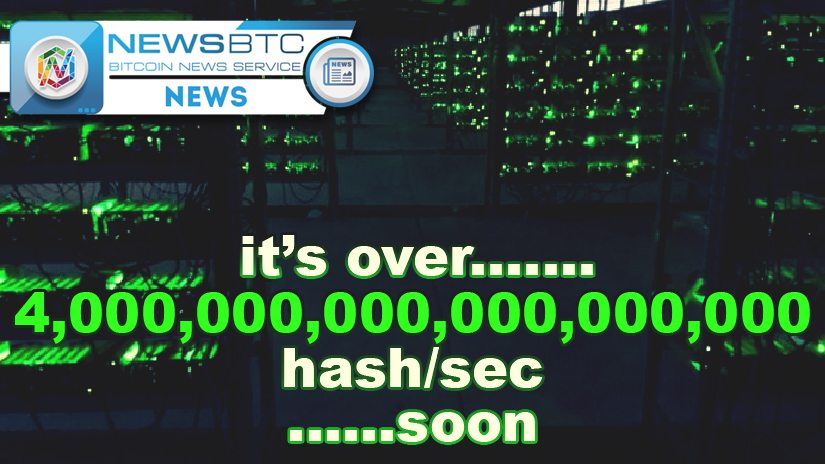 Bitcoin Network On Target To Surpass 4 Exahash of Mining Power

It is evident the bitcoin network hashrate continues to grow. As the mining difficulty increases, more hashpower is needed to generate new blocks. At this rate, it is only a matter of time until we surpass the 4 exahash per second threshold. The bitcoin network has come a very long way over the past few years, that much is certain.

The charts provided by BitcoinWisdom show how the hashrate has gone up steadily these past few years. Although it appears the network almost reached 4 exahash per second a while ago, things have quieted down ever since. However,  it appears another mining power increase is on the horizon. Reaching 4 exahash per second signals a significant bitcoin mining milestone, to say the least.  Compared to about a year ago, the hashpower has more than tripled.

One Reddit user posted an image of how the 4 exahash threshold has been reached already. The charts on both BitcoinWisdom and Blockchain.info state otherwise, though. In fact, the network sits at 3.5 exahash for the time being, which is quite a big difference. Then again, these numbers can change at any given time when someone throws a lot of hardware online.  With mining hardware becoming more efficient, reaching the next threshold is only a matter of time.

Reaching 4 Exahash Is Only A Matter of Time

Some people may wonder why people continue to invest in bitcoin mining. With the block reward halving the number of coins generated per block, there seems little incentive to do so. Then again, the bitcoin price continues to go up in the process which attracts new miners. Additionally, the high transaction fees make mining more than profitable for a lot of people under current conditions. Making money in a semi-passive way is quite appealing if people can afford the upfront investment.

When the SEC rejected the bitcoin ETF, mining support could have dwindled. Many people expected a big price crash, although most losses were recovered rather quickly. Looking at the charts now, it appears another bullish run is being prepared. This will certainly help the bitcoin network reach the 4 exahash mark in the coming months. A lot of money can be made by mining bitcoin these days, although it requires a significant upfront investment.

All things considered, things are looking quite good for the bitcoin network as a whole. The mining power increases, the price goes up, and there are more transactions than ever. While the mounting transaction fees are not fun by any means, a solution can be found to address this problem.For now, things are looking positive as bitcoin still has a lot of growth potential. These are exciting times to be part of the bitcoin ecosystem, that much is certain.

BitStarz Player Lands $2,459,124 Record Win! Could you be next big winner?
Get 110 USDT Futures Bonus for FREE!
Read our comparison of 50 different crypto casinos. Find out who has most generous bonuses, best UX, knowledgeable customer support and best provably fair games.
Tags: bitcoinBitcoin NewsExahashmining
Tweet123Share196ShareSend
Win up to $1,000,000 in One Spin at CryptoSlots