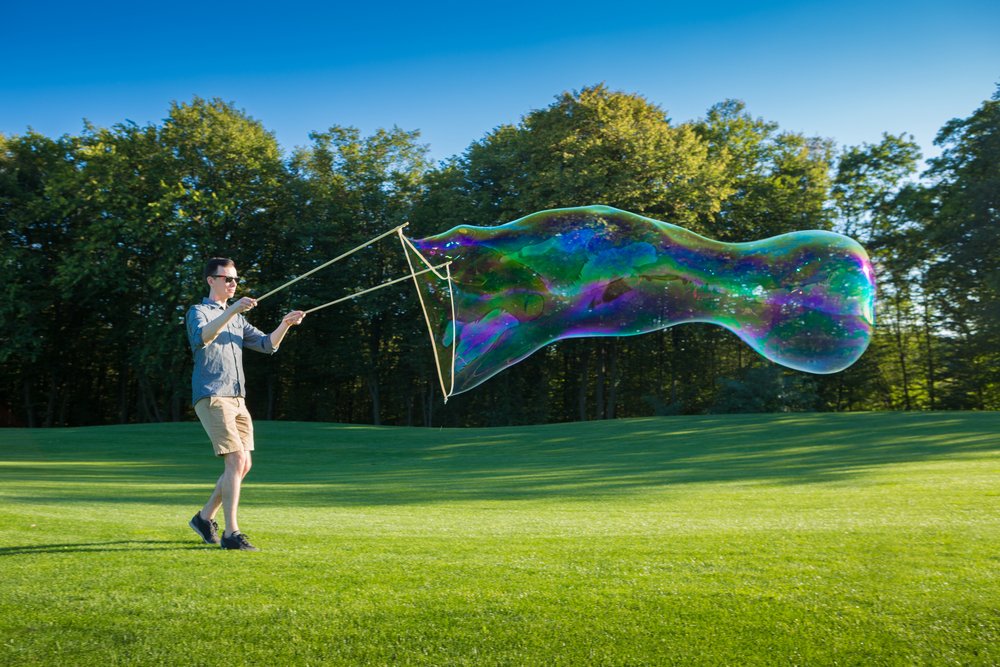 Just over a year ago, the price of bitcoin registered an average low of $3,120 across many regulated and unregulated cryptocurrency exchanges. A year before that, the asset was trading at its Everest value of $20,000. The 84 percent decline in the “revolutionary” financial asset allowed Bloomberg to reiterate that bitcoin, indeed, was a bubble.

Bitcoin remains a bubble – a bluffing bubble that pretends to pop but does not pop. By the time the mainstream media and every skeptic finish their hundred-word obituary about the cryptocurrency, it rises back to prove them all wrong.

It proves that beneath all the flaws, there is a story of progress. People want to purchase bitcoin despite the shortcomings presented by every trustworthy economist or investor. That explains why the cryptocurrency’s so-called bubble phase has outlived even the most notorious financial bubbles of all time.

Mainstream media outlet CNN in 2017 was quick to compare bitcoin’s enormous rise with that of Tulip Mania, a financial bubble from the early 17th century wherein speculation drove the price of tulip bubbles to unheard levels. People were putting their homes on collateral to get into the Turkey-made bulb markets.

As greed drove the tulip bubbles’ prices up, the result was a string of massive sales when the rates touched local highs. Those who bought the bulbs at higher rates were the firsts to feel the burn of an overvalued lightning instrument.

Bitcoin rose in a similar manner – and crashed almost in a similar way. But unlike the Tulip Mania, the bitcoin bubble didn’t die but reformed into a new one. The former lived for only three years (1634-1637); bitcoin, on the other hand, has entered its eleventh year already.

Bitcoin is the biggest bubble & bust in history. Biggest as up 60X from 3 years before peak. Nasdaq was only 4X, so tiny bubble vs BTC. Even bankrupt South Sea was 8X. More similar to Mississippi (35X) that went bankrupt or Tulip-mania. BTC bust biggest/fastest too. Case rested! pic.twitter.com/OYLtIJ6dPq

Where the Tulip fails at proving bitcoin a bubble, the dot-com boom redefines it.

Investors went crazy over the internet and internet-related companies in the late 1990s. They injected multibillion dollars into the web-based startups that pushed the Nasdaq Composite Index up by more than 200 percent in just a year.

The fun didn’t last. The so-called dot-com burst in the early 2000s, partly because a majority of those web startups failed to turn up practical tools. Also, higher interest rates made borrowing costlier that prompted Nasdaq to plunge by more than 80 percent over the next years.

The Dot-Com bubble had a few survivors, nevertheless. Amazon, for instance, was one of the top-earning firms during the boom – and remained a tech powerhouse despite a circa 94 percent crash in its stock value during the bust.

Like Amazon’s, bitcoin’s crash came under the influence of its own dot-com bubble, the initial coin offerings (ICO). Investors put billions of dollars into the young cryptocurrency startups that later turned out to be either scams or vaporware. The cryptocurrency market crashed and bitcoin became one of its good-hearted victims.

2020 a Litmus Test for Bitcoin

Bitcoin has survived beyond an average bubble phase. The cryptocurrency is looking at massive infrastructural developments with the launch of regulated spots and derivatives platforms. At the same time, its prominence against the dovish central banking policies is growing among the millennials. ETF Store President Nate Geraci weighs:

“When we talk to our younger clients – we have a core gold allocation in our portfolios, and they’ll ask about that and say, ‘What about crypto?’ And if you talk to, primarily millennials, and ask them which they prefer, bitcoin or gold, it’s a landslide. It’s not even close, it’s like 90% prefer bitcoin.”

Part of the bullish sentiment comes from bitcoin’s potential to be used as a tool to transfer funds cheaply across borders. The rest believes that the cryptocurrency is a better gold owing to its scarcity, as well as minimal storage and movability requirements.

Bitcoin is now standing before global regulators that continue to look at it as a means to fund illegal activities. More so, 2020 will show whether or not they want to include the cryptocurrency into the mainstream.

In either case, bitcoin will have outlived every major financial bubble by that time.

Tags: bitcoindotcom bubbleTulip Mania
Tweet123Share196ShareSend
Win up to $1,000,000 in One Spin at CryptoSlots