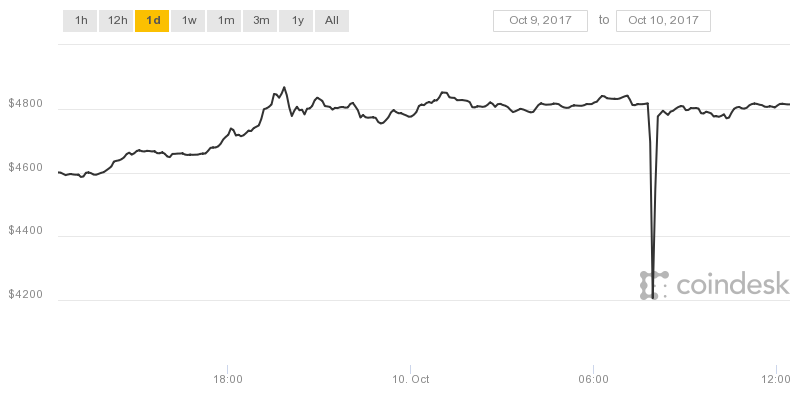 CNBC reports of a mysterious flash crash in the price of Bitcoin. According to them, the crash took place at around 9am UK time. Based on CoinDesk’s price index, the value of the digital asset fell from a high of $4,867 to a low of around $4,200. It was down $600 for the session (12%) but recovered fast returning back to around $4,780 just ten minutes after the supposed crash.

CoinDesk derive its Bitcoin price index from the rates at four different exchanges. These are BitStamp, Coinbase, itBit, and OKCoin. Mysteriously, however, no other price indexes showed the crash, and neither did industry overseers, CryptoCompare.com.

Even more bemusing is the fact that none of the four exchanges which make up the CoinDesk index showed any sign of the flash crash ether. According to the CNBC report, the publication has reached out to CoinDesk to enquire about the possible cause for the discrepancy between their price and others. There is yet to be a published response, however.

At around the same time, news broke of the Russian central bank’s plans to crackdown on crypto. According to reports, fresh restrictions are forthcoming on Bitcoin and digital asset exchanges. Speaking at a conference in Moscow, the first deputy governor at Russia’s central bank, Sergei Shvetsov said the following about Bitcoin:

We can not stand apart. We can not give direct and easy access to such dubious instruments for retail (investors).

He went on to say that Russia will block access to websites offering cryptocurrencies such as Bitcoin.

Whilst some have been quick to draw a parallel between the Russian news and that of Chinese ICO regulation in September which resulted in a market crash, it seems unlikely that the causes of today’s flash are similar. Russia has nowhere near the same level of influence within the space as China exerts, and the country accounts for a much smaller share of the entire market. The China ban on ICOs, whilst not directly affecting Bitcoin, sufficiently rocked the entire crypto space to see $200 drop quickly off the price of a single Bitcoin, whilst other currencies such as NEO, and Ether which specialise in ICO applications understandably suffered greater losses. The rapid $600 shaved off the BTC price this morning seems hardly comparable in this respect.

In addition, the news from Russia comes as little surprise to many within the space. Russian officials have largely held a negative impression of the currency, and thus a half-expected announcement shouldn’t have had such a detrimental impact on BTC’s price.

Meanwhile, the situation observed today also differs from the ETH flash crash of June this year. In this example, it’s been widely accepted that a multi-million dollar sell order triggered many automatic stop loss orders on the GDAX exchange driving the price into the ground. All price indexes showed evidence of this drop, and its impact could be felt across the entire ETH market.

For now, there is little information circulating about this morning’s flash crash but no exchanges are currently under investigation. As CNBC hint, it may simply be a mistake on behalf of CoinDesk. We’ll bring you more on this if and when the details emerge.

Tags: bitcoinbitcoin crashBitcoin NewsBitcoin price indexcoindeskcrashexchangeflash crashNewsprice indexregulationrussian regulation
Tweet123Share196ShareSend
BitStarz Player Lands $2,459,124 Record Win! Could you be next big winner? Win up to $1,000,000 in One Spin at CryptoSlots