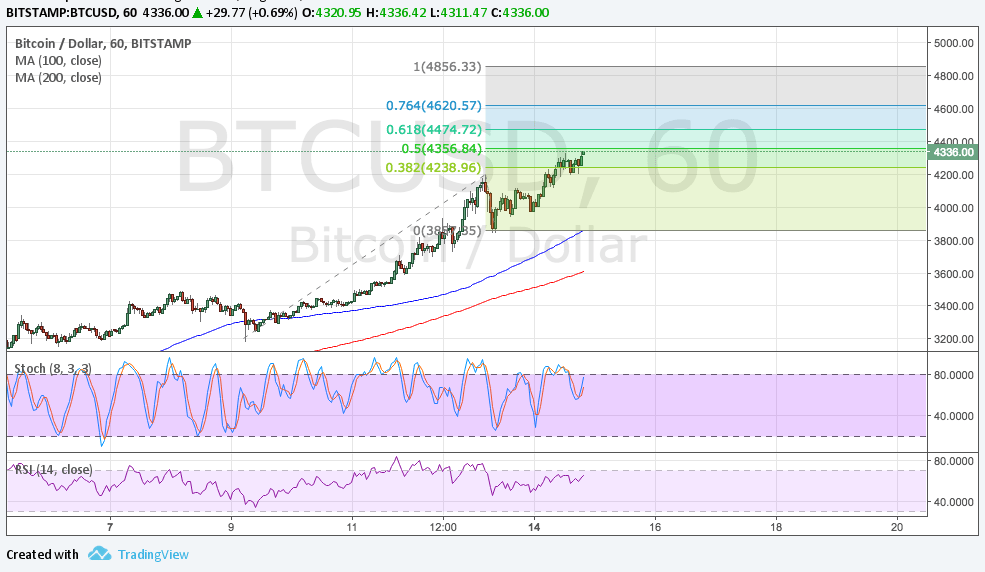 Bitcoin price seems unstoppable in its rally as it sets it sights on new highs closer to the $4850 mark.

The 100 SMA is above the longer-term 200 SMA so the path of least resistance is still to the upside. In addition, the 100 SMA lines up with the swing low so a large correction could still find a floor at this area. The gap between the moving averages seems to be widening again to reflect strengthening bullish pressure.

Stochastic has been on the move down but turned back up once more to show that buyers are eager to push bitcoin price further north. RSI was previously cruising sideways to indicate consolidation but is also turning higher so bitcoin might follow suit.

The tension surrounding the situation with North Korea remains elevated even after leader Kim Jong Un mentioned that he’d wait and see what Uncle Sam’s next moves would be. Apparently he has been briefed about the missile strike plan on Guam and has discussed it with military officials. It has been said that the strike date is sometime around August 15 so markets could remain in risk-off mode today.

Bitcoin price typically gets a boost from this kind of sentiment as investors still try to search for higher yields outside of traditional stocks and commodities holdings.

Apart from that, the dollar is sliding against its peers after seeing weak CPI figures last Friday and foreseeing downbeat retail sales data this week. Analysts are counting on a rebound for both headline and core figures, though, but the FOMC minutes might also douse Fed hike expectations for September.