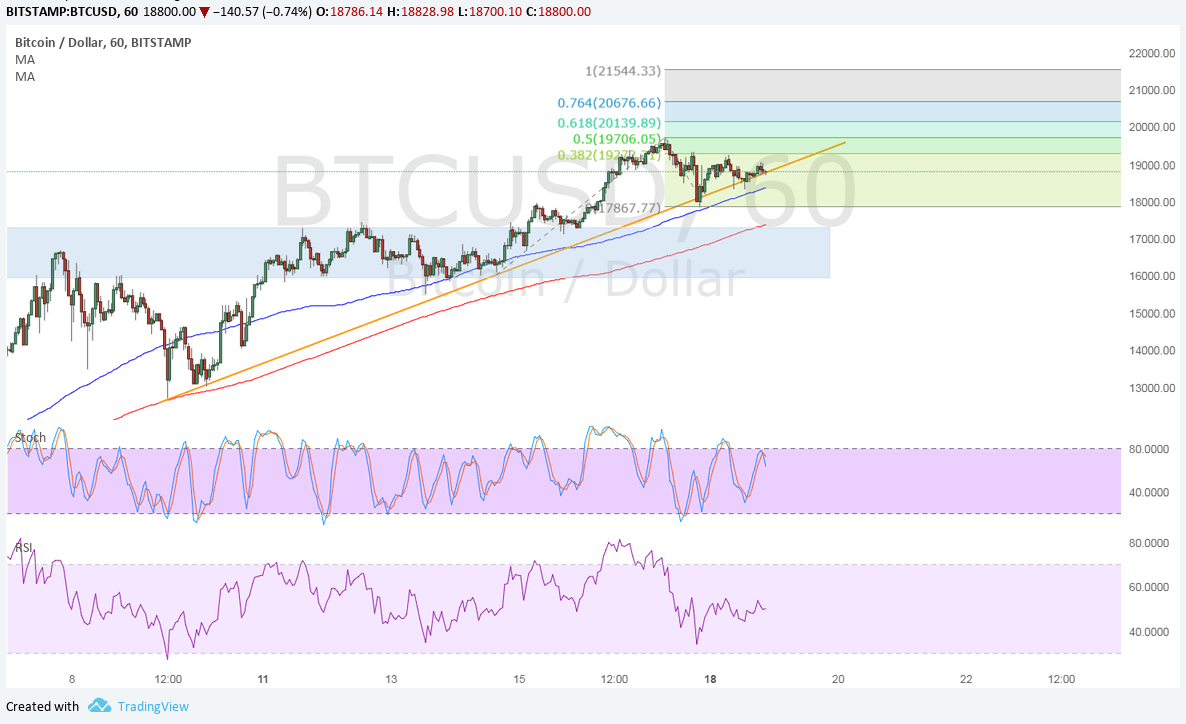 Bitcoin price might need a larger pullback before attempting to set new record highs past the $20,000 handle.

The 100 SMA is above the longer-term 200 SMA, confirming that the path of least resistance is to the upside. This signals that the uptrend is more likely to continue than to reverse. The 100 SMA also coincides with the rising trend line to act as an additional layer of defense.

However, bitcoin price appears to be running out of steam on its rally, which suggests that a larger correction might be underway. The next area of interest below the Fibs is at the $17,000 level, which is around the former resistance and the 200 SMA dynamic inflection point.

Stochastic seems to be pointing down again even without hitting overbought levels, suggesting that sellers are still in the game. RSI is treading sideways to indicate further consolidation but is also crawling slightly higher.

Dollar bulls are back in the game as the tax bill approaches its last stretch. Republicans were able to come up with a unified version of the proposals from Senate and the House, leading up to a final vote this week. If approved, Trump could sign this tax bill into law and spur yet another strong run in US equities and the dollar.

Nonetheless, bitcoin remains supported following the launch of bitcoin futures on CBOE and CME as the elevated demand is has been positive for volumes and activity. A number of funds have included bitcoin in their portfolios but traders appear hesitant to increase their holdings as the cryptocurrency is close to a major psychological hurdle at $20,000.

Tags: bitcoin pricebitcoin technical analysisbitcoin tradingbtcusd pricetrading
TweetShare
BitStarz Player Lands $2,459,124 Record Win! Could you be next big winner? Win up to $1,000,000 in One Spin at CryptoSlots