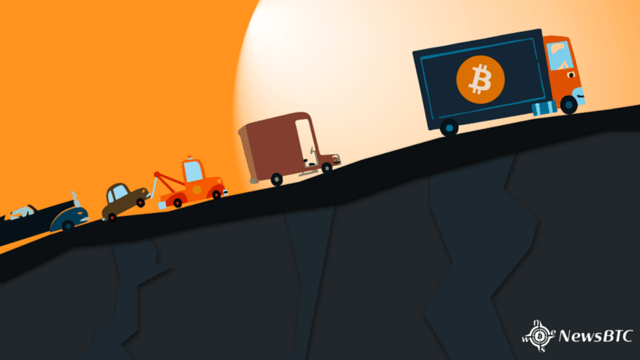 BTC Trucks On, Traditional Financial Ecosystem Burns To The Ground

Throughout the years, Bitcoin has often been chastised for its price volatility. While it is true big losses and big gains were possible in the Bitcoin world at just about every turn, the digital currency has come to maturity over the past twelve months. At the same time, well-established traditional financial markets are plummeting to the ground and even deeper. All of this makes one wonder where the true volatility lies, and which people should be frowned upon.

Regardless of how one wants to look at things, our financial ecosystem has been on the verge of collapsing upon itself for quite some time now. Financial crises, countries facing bankruptcy, central banks issuing financial care packages, and deliberate devaluing of national currencies have been the major headlines throughout all of 2015.

A lot of consumers have started to realize the financial ecosystem we live in today can no longer sustain itself unless something changes. That change needs to come very soon, however, as the Chinese stock market trading debacle cost the world economy over US$2.6 trillion in just four days. When talking about volatility, amounts like these take the crown over anything else that is going on in the world.

Keeping in mind how the nominal value of the world economy was estimated at roughly US$77.609 trillion, the US$2.6 trillion loss may seem like peanuts when looking at things on a broader scale. At the same time, this number is equivalent to wiping out 14.6% of Tuvalu’s entire GDP. Even though hardly anyone will have heard of Tuvalu before, wiping out a large portion of an island nation’s GDP is not something people should take lightly.

What makes this entire China situation even worse is how there is no end in sight regarding how low the markets will go. The intervention by the People’s Bank of China a few days ago didn’t help matters much, and various markets have seen some of their worst losses in decades. The FTSE 100, for example, lost 3% of its value in one day, the second worst start to a year since 1988.

People not active in the financial industry seem to forget how China is one of the largest economies in the world, and any type of effect on their financial situation can send ripples around the globe. The panic being spread as a result of Chinese stock market trading being halted twice in a handful of days is not helping matters much either.

It was only a matter of time until our brittle financial ecosystem started showing its true colors. The world economy’s value has been kept artificially afloat for far too long, and the glass ceiling had to crack at some point. While investors are looking to exit their Chinese Yuan assets as soon as possible, others have started the diversification process by obtaining portions of Bitcoin.

Bitcoin Is A More Stable Financial Solution Than People Assume

If financial experts really want to talk about volatility, they might want to rethink their stance on Bitcoin. The digital currency has been anything but volatile over the past year, whereas regular finance has been grasping at straws to prevent from slipping into a downward spiral. Bitcoin, on the other hand, has been stable, and even saw a minor price increase in recent days, carrying on unencumbered by traditional finance.

Granted, Bitcoin had seen a very volatile year in 2013, when the price skyrocketed without clear indication as to why. As a result, the Bitcoin price came tumbling back down and crashed hard. However, the digital currency has also shown its resilience by surviving that moment and carrying without too much trouble. In fact, interest in Bitcoin and its underlying technology has never been greater since that time.

To investors all over the world, Bitcoin is the one asset that can not only recover from a major price swing but also offers hope for growth in the future. Unlike fiat currencies, Bitcoin’s value can effectively increase at any moment, due to its limited supply and portfolio diversification aspect. One could even go as far as saying Bitcoin offers everything traditional assets provide, without the volatility, and much more potential for a healthy financial growth.