Bitcoin Turns Ten: A Blast To The Past 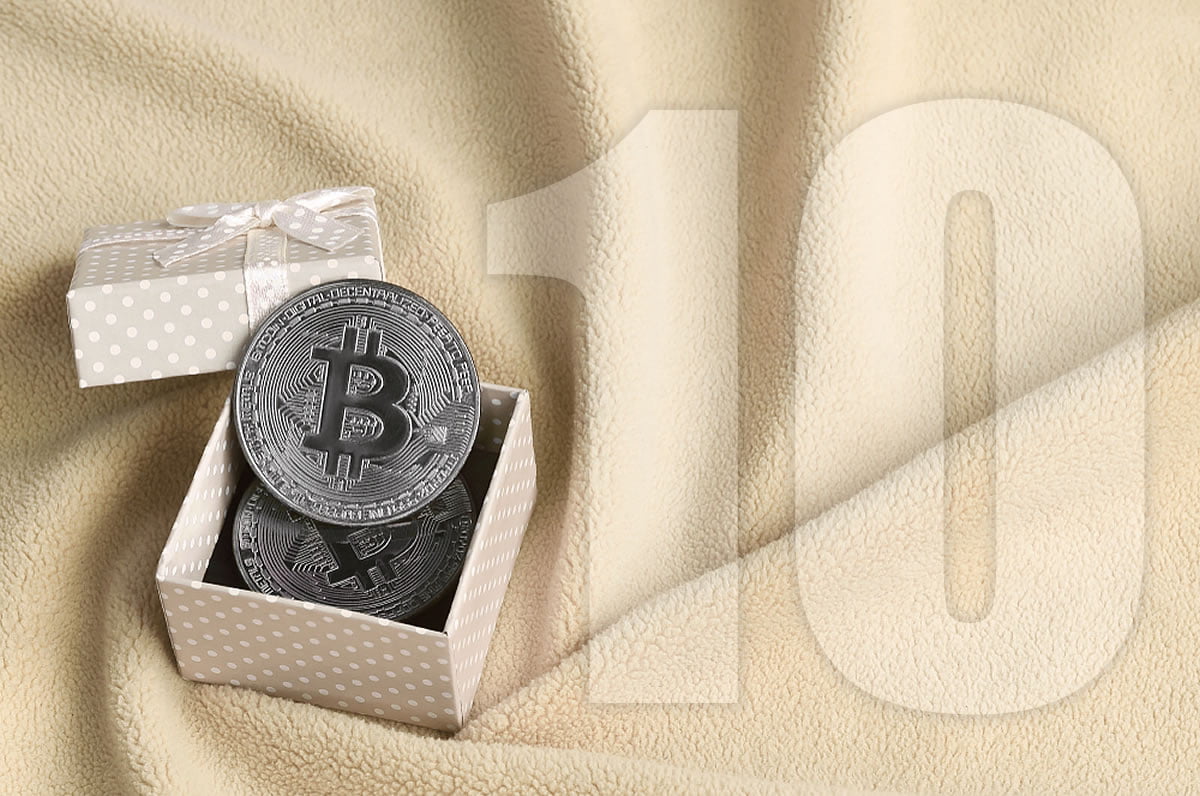 Just shy of 10 years ago, on October 31st, 2008, Satoshi Nakamoto, the pseudonymous creator of the now-world-renowned Bitcoin project, sat down to release a technical paper on what is arguably the most important innovation in human history.

As you may (or may not remember), this paper, titled “Bitcoin: A Peer-to-Peer Electronic Cash System,” highlighted the world’s first decentralized network and a viable form of digital cash that was seemingly poised to usurp the powers that be — the government and centralized institutions.

Initially, Nakamoto’s paper was slow to garner traction, occasionally seeing a few clicks from subscribers of Metzdowd.com, a lesser-known cryptography mailing list that was frequented by innovators, digital anarchists, and zany internet goers who likely had two too many beers. In spite of only seeing fleeting flashes of interest at the start, Nakamoto, who claimed to be a Japan-based coder, pushed ahead, launching Bitcoin v0.1 via Sourceforge on January 9th, 2009.

In the Bitcoin Network’s first block, commonly referred to as the near-deified “Genesis Block,” Nakamoto, making his hate for banks public, embedded the following comment:

While this could’ve been any old headline snagged from one of the internet’s thousands of RSS feeds, the fact that Nakamoto chose a story that clearly outlined the state of the traditional banking system at the time indicates that he had a penchant to hate banks.

As the first block was processed and the first coinbase transaction was issued, it was apparent that Satoshi was all by his lonesome, as his node, the world’s first full Bitcoin node, sat alone and in the dark. However, this changed when computer scientist Hal Finney overtly expressed interest in the decentralized system, becoming the first user to ever receive a BTC transaction, and from Satoshi himself, no less.

Still, despite the fact that the Bitcoin Network was as decentralized (and appealing) as systems come, with a (near) set-in-stone 10-minute block time and a fixed distribution curve, for a majority of the system’s infant months, Satoshi and Finney were left alone to twiddle their thumbs… Or in this case, to twitch their fingers over a keyboard in a bid to better the Bitcoin Network.

In a testament to the ghost town that was Bitcoin in 2009, Nakamoto, who is believed to have been Hal Finney by some, mined an estimated one million BTC, which have presumably been lost in the ether.

However, as the brainchild of Nakamoto turned one, the pseudonymous coder’s involvement in the project waned, like a candle reaching the end of its wick. And eventually, due to an unexplained series of circumstances, in classic Satoshi style, the Bitcoin founder disappeared, quickly handing pertinent keys and data over to Gavin Andresen, along with a handful of other early crypto adopters, to foster the project further.

Following that fateful day in 2010, Bitcoin wasn’t one man’s creation any longer, but rather, an innovation backed by a countless number of diehard decentralists and those with visions of a new world — one revolutionized by decentralized systems.

On May 22nd, 2010, the world saw one Laszlo Hanyecz issue the world’s first real-item BTC transaction, sending 10,000 BTC (~$40 at the time) to a Bitcoin Forum user named Jercos in exchange for two Dominos pizzas. While this occurrence may seem silly and something that should be swept under the rug, since Laszlo took the first bite of his 10,000 BTC pizza, nothing has been the same — hence the creation of “Bitcoin Pizza Day.”

While Laszlo’s transaction was a crypto-to-fiat transaction in essence, at the time, there were few legitimate, accessible, and easy-to-use platforms that openly supported fiat, which hampered the adoption and maturation of Bitcoin and the earliest semblance of altcoins.

Programmer Jed McCaleb aimed to solve this problem, turning Magic: The Gathering Online eXchange (Mt.Gox), which he owned, into the Bitcoin exchange that some loved, and others loved to hate. Eight months after launching Mt.Gox on July 18th, 2010, McCaleb, who has since done stints at the Stellar and Ripple projects, sold Mt.Gox to French developer Mark Karpeles, who was situated in Japan at the time.

As the now-infamous story goes, Mt.Gox saw its first tussle with hackers in mid-June 2011, when a malicious attacker forced the nominal price of BTC to move to $0.01 on the exchange. Although this breach was evidently dangerous and exposed flaws in the platform’s operational security systems, interested consumers continued to flock to Mt.Gox. By 2013, the Japan-based platform had garnered an average of 70% of the world’s daily BTC volume, indicating that McCaleb’s move to pawn off Mt.Gox to Karpeles may have backfired.

As Mt.Gox continued to gain traction, Ross Ulbricht, the alleged founder of the online BTC-centric Silk Road marketplace, was implicated in cases of money laundering, computer hacking, conspiracy to traffic narcotics, “and attempted murder.” Ulbricht, who has been dubbed a hero by many in the cypherpunk community, was sentenced to a life without parole in prison, with this being one of the first times that the U.S. government had gone all-out against crypto, shutting down Silk Road’s illicit good market in the process.

As Silk Road collapsed, Mt.Gox exchange remained at the top of the leaderboards, so to speak. However, In February 2014, the exchange suffered a ground-breaking hack, reportedly losing upwards of 750,000 BTC. This hack, which saw Mt.Gox lose over $473 million worth of BTC (at past valuations) and the subsequent shutdown of Mt.Gox catalyzed the creation of a Japanese court case, which still rages on to this day. Along with sparking a heated legal debate, with “Mt.Gox, where’s our money?” becoming the war cry of hack victims, the story of Mt.Gox became one of the first crypto-related stories to garner traction in the mainstream media realm, leading many consumers to permanently disassociate their lives with Bitcoin and cryptocurrencies.

However, it wasn’t all doom and gloom in the crypto markets, as during the multi-year course of aforementioned two events, the nascent crypto ecosystem continued to mature at an unbridled pace. For one, in early 2011, as Mt.Gox was starting to stand on its own two feet, Wikileaks, a non-for-profit leaked/secret information source, revealed that it would add support for BTC following an embargo from payment providers, who didn’t want to associate themselves with the illicit leaking of confidential information.

Although this is only one out of the hundreds of examples of real-world adoption (Overstock.com, NewEgg, Steam, Microsoft, and many others also joined the fray), this specific case highlights Bitcoin’s role as an uncensorable, cross-border, and efficient method of payment, which is exactly what Satoshi envisioned in his original paper.

The Lull And Subsequent Boom

Likely due to the aforementioned Mt.Gox and Silk Road debacles and/or classic market cycles, the crypto industry quieted down in 2015 and 2016, with BTC undergoing a relative lull, with prices often resembling traditional equity markets at some point during that two year period.

However, while volatility declined and speculative interest exited the market, the industry’s fundamentals continued to boom, with Bitcoin and other crypto assets gaining recognition as a form of online payment, while also seeing positive regulatory news rush in en-masse.

In March 2016, solidifying the legitimacy of cryptocurrencies, Japan’s Cabinet formally recognized virtual currencies as something similar to physical money, pushing the nation forward in its acceptance of cryptocurrency and blockchain technology. Following this regulatory win, other nations followed suit, but like Bitcoin’s most infant years, Japan remained a home of innovation for this promising technology.

Eventually, 2017 rolled around, and as you likely remember, it was quite a year to behold, especially in the context of the crypto market and Bitcoin specifically. Throughout 2017, Bitcoin and crypto assets garnered a colossal amount of consumer traction, with “Bitcoin” becoming one of Google’s most searched terms, if not the most searched term on the America-based web search giant. In 2017, discussion regarding alternative vehicles for Bitcoin investment began, resulting in plans to launch ETFs, futures contracts, and similar products that were all centered around crypto assets. While the Winklevoss Twins’ ETF application fell through, in late-2017, as BTC neared its peak at $20,000, the U.S. Commodities Futures Trading Commission (CFTC) gave the CME and CBOE Global Markets the green light to launch a cash-settled Bitcoin futures contract, which sparked claims that institutions were poised to come rushing into this market.

However, since then, the value of crypto assets have seen a sharp sell-off, as many have claimed that this market reached a point where it was well over-bought. Due to crypto’s most recent collapse, per 99Bitcoins‘ “Bitcoin Obituaries” page, industry onlookers have claimed that this nascent innovation has died upwards of 315 times, likely due to a multitude of qualms. But now, as seen by the monumental rise of interest from retail, merchant, and institutional participants, this industry isn’t ready to go kaput… far from in fact. But more on that in the next edition of “Bitcoin Turns Ten”.