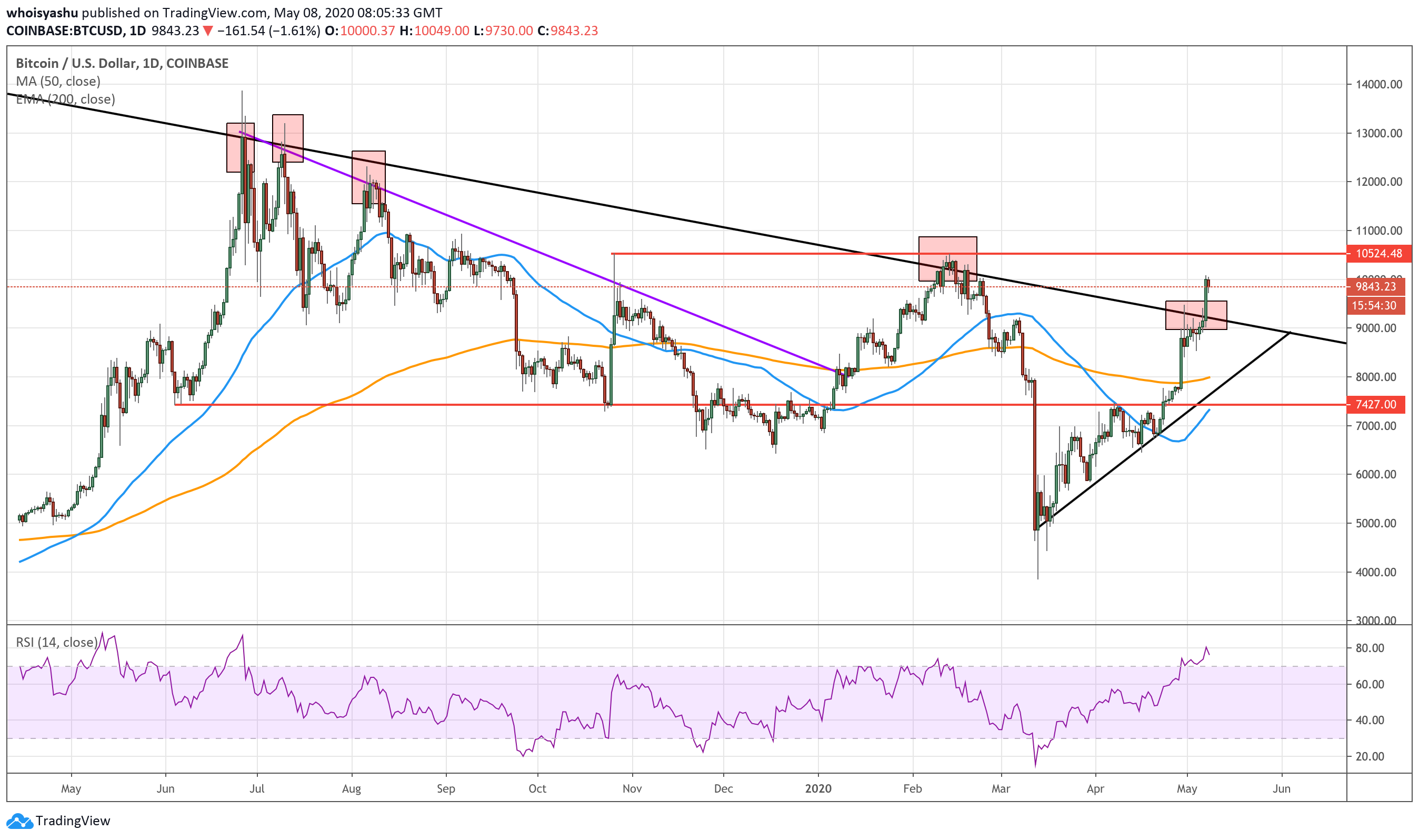 A string of bullish catalysts drove bitcoin prices above $10,000 in late trading Thursday.

The cryptocurrency topped at $10,079 a token after rallying more than 10 percent as of 2300 UTC. It maintained the six-figure valuation ahead of the Asian session open Friday but later fell by more than 3 percent. At its intraday lowest, bitcoin was changing hands for $9,730 a token.

Bitcoin’s earliest gains came as a part of an extended bull run that began after it bottomed out below $4,000 in March 2020. The cryptocurrency had crashed by more than 50 percent alongside the Wall Street index. It only started rebounding  – alongside the U.S. equities – after the Federal Reserve decided to protect the U.S. economy with a $3 trillion cash liquidity injection.

The profits kept coming later into April and May as traders assessed more bullish narratives. That included Bitcoin’s mining reward halving on May 12. On the day, the cryptocurrency’s daily supply rate will go down from 1,800 BTC to 900 BTC. Some top analysts believe that halving would make bitcoin costlier in spot markets.

But bitcoin’s move from $9,000 to above $10,000 came only after when a famed hedge fund investor announced his interest in the cryptocurrency.

Paul Tudor Jones, the chief executive & co-founder of Tudor Investment Corp, which runs a $22 billion asset management fund, said in an investor note that he may hold as much as “low single-digit percentage” in bitcoin futures. His reasons mirrored what the bitcoin bulls were propagating for years: That the crypto can act as a hedge against fiat inflation.

Halving FOMO, Jones’ entry, and global media’s extended coverage on both the fundamentals led bitcoin above $10,000.

The analysis took cues from the cryptocurrency’s positioning under a long-term resistance trendline – the same that stopped it from closing above $20,000 in 2017 and $14,000 in 2019. Bitcoin retested the same level more than ten times since February 2020 but closed above it only for a shorter-timeframe.

More than twelve hours into the rally, the bitcoin price is now above the Descending Trendline, as shown in the chart above. But the latest downside corrective attempts are similar to pullback moves of February 2020, July 2019, and June 2019. That means bitcoin’s break above the trendline could be a fake breakout.

The Relative Strength Indicator (RSI) says the same. Its readings are now above 70, which means bitcoin is currently overbought – and is in need of a dire correction to neutralize its market sentiment.

Traders could keep the price afloat, nevertheless, owing to strong fundamentals. But stretching the rally any further would lead bears to short the top, thereby crashing the market back below the Trendline. Should it happen, bitcoin could fall towards $7,500.

Photo by Ussama Azam on Unsplash

Tags: bitcoinbtcusdcryptocryptocurrency
Tweet123Share207ShareSend
BitStarz Player Lands $2,459,124 Record Win! Could you be next big winner? Win up to $1,000,000 in One Spin at CryptoSlots