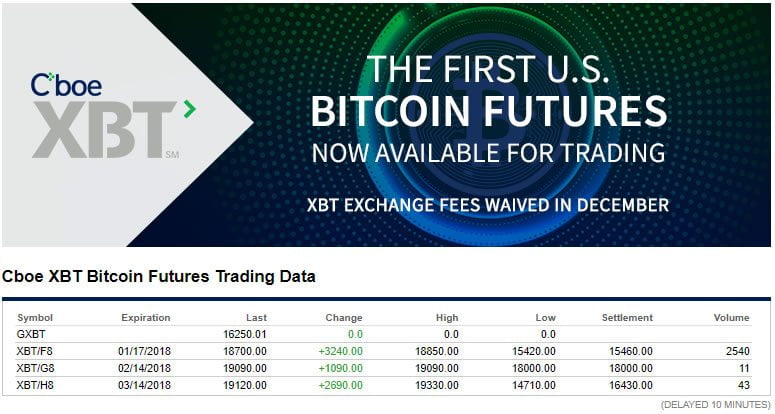 The long awaited launch of Chicago Board Options Exchange Bitcoin futures contracts went off with a bang yesterday as the website was knocked offline by a surge in traffic. The first contracts were offered at 18.00 EST on Sunday and an unprecedented demand overwhelmed the exchange.

CBOE Tweeted a status update which said “Due to heavy traffic on our website, visitors to cboe.com may find that it is performing slower than usual and may at times be temporarily unavailable. All trading systems are operating normally.”

The site outage coincided with a surge in Bitcoin price at the time of launch. According to CoinDesk’s Bitcoin Price Index (BPI) it jumped from $14,509 at 22:59 UTC to $15,732 seven minutes later, 8.4% in a few minutes. Once the initial rush had subsided the CBOE website came back online and contracts started to sell. The exchange has listed some details on its Bitcoin futures offerings here.

Frustrated customers vented on social media, one Tweeting “Quite a pathetic launch of future on CBOE, it seems that the website crashed.” and another added: “CBOE site down eight minutes after Bitcoin launch.” It is often the case that organizations do not anticipate the level of traffic to their servers and do not make provisions for additional bandwidth. In recent weeks major exchanges such as Coinbase have gone offline due to high levels of traffic.

According to the CBOE website the XBT/F8 contract which expires next month is the most popular one with over 2540 already sold. The price determination is also explained on their website: “The single price settlement process gives participants the option of using XBT futures to hedge their exposure in underlying bitcoin or gain exposure to traded bitcoin prices without holding bitcoin.”

The first major regulated US exchange is now running Bitcoin futures and more will follow with CME Group launching their own contracts on December 18. Others are likely to develop their own offerings if these are successful, and looking at the initial reaction they will be. Company executives are hoping the CBOE will be able to launch other products centered around crypto currencies which could include exchange traded funds.

There has been a lot of critical sentiment over Bitcoin, mostly from Wall Street bankers who see it as a threat to their business model which largely revolves around controlling other people’s finances. Investors seem unperturbed at the moment the Bitcoin behemoth has bounced back from its 25% weekend slump to trade back towards the $16,500 level.