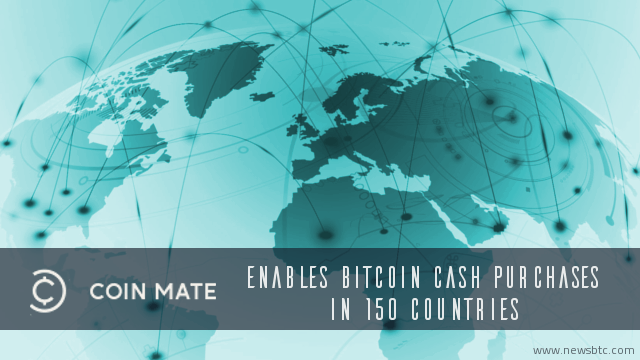 Following the announcement of its partnership with payment provider MoneyPolo, UK-based CoinMate has enabled Bitcoin cash purchases in over 150 countries.

The Bitcoin startup, as per its comments to media, was heavily focussing on eliminating the need of banks while selling/purchasing Bitcoin. And then they found MoneyPolo, a renowned cash transfer company with services spread across over 100 countries. CoinMate strategically decided to integrate the said company onto their platform, while admitting to have been impressed by its cost effective cash withdrawal and deposit services. Nonetheless, this tactical move has now placed the Bitcoin trading firm in over 150 brick-and-mortar locations around the globe.

“Most Bitcoin markets work with bank deposits and bank withdrawals, however it is estimated that 40% of the world’s adult population has no bank account and an even greater share is limited to local transfers,” the CoinMate’s representative Roman Valihrach told CoinTelegraph. “MoneyPolo account allows cost effective cash deposits and cash withdrawals in more than 100 countries of the world through their partnership networks. That’s why we decided to integrate MoneyPolo into CoinMate.”

CoinMate is now reportedly planning to integrate the Sofort instant bank deposit method by next month.

CoinMate considers itself fortunate enough to have been operating from UK, a territory which, it believes, offer the friendliest working climate for digital currency companies. The regulated payment operator is particularly impressed with the nation’s no-VAT policy on Bitcoin, for the latter considers the digital currency as “private currency” and exempts its payments and transfers from falling under the VAT’s purview.

“There’s a reason we’re based in the UK as a cryptocurrency company. It’s here that regulation has been the most proactive,” the company stated in a press statement.

“Not only that, transactions have been officially declared exempt from VAT (Value Added Tax). You can’t get much better than that.”