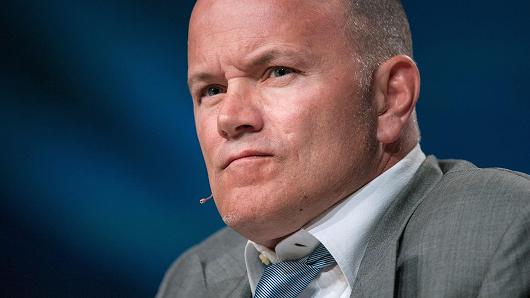 Mike Novogratz, former hedge-fund manager at Fortress, will advise on new token-exchange platform AirSwap. Based on the Ethereum network, the project aims to provide users a digital coin swapping service. The idea to is to match buyers and sellers in a model similar to CraigsList, or GumTree in the UK. Novogratz told CNBC that he was:

… fascinated to see the next wave of innovation in decentralised exchanges, and find AirSwap to be a well-thought out platform with a fantastic team. We continue to be excited about the ongoing developments in the Ethereum ecosystem.

CNBC report that Novogratz agreed to assist in the AirSwap project on October 4 but the news has gone under the media’s radar. The token exchange platform he’s teamed up with is based in New York and will work with Consensys, a lead development team on the Ethereum network. In a recent ICO, AirSwap raised around $35 million. They aim to launch the platform publicly early in 2018.

Co-founder of AirSwap and former head trader for Virtu, Michael Oved, told CNBC about their collaboration with Novogratz:

In a lot of ways right now, we’re seeing the bridge between Wall Street and this cryptoworld. I think Novogratz is going to help bring institutional players into our platform.

Novogratz hasn’t been shy about his appreciation for crypto in recent months. Whilst he doesn’t dismiss the possibility that the whole thing is a bubble, he’s excited about the profits that can be made along the way.  The former hedge manager has plans to launch a digital assets fund through his firm, Galaxy Investment Partners. Together, they’re looking to invest some $500 million in cryptocurrency.