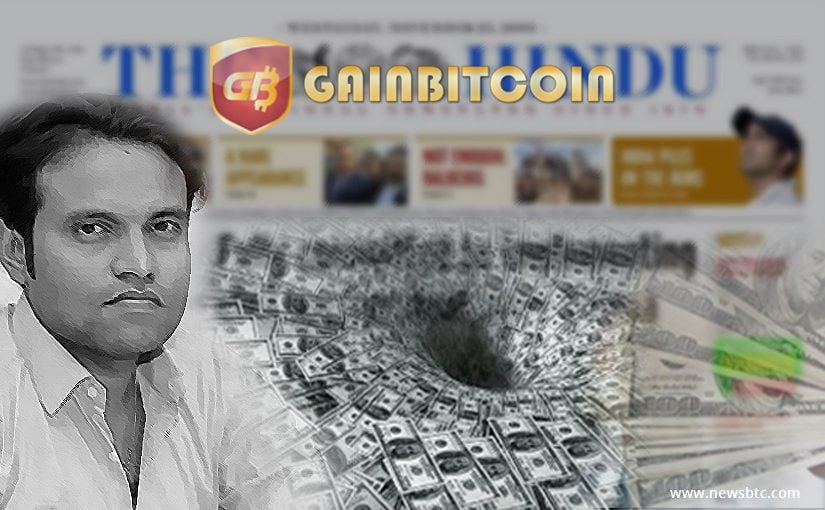 The world of Bitcoin and cryptocurrency has seen many Ponzi schemes over the years. One of the more notorious cloud mining scams was called GainBitcoin. Its founder, Amit Bhardwaj, is a wanted man, despite there being no outstanding warrants for his arrests. He is still active in cryptocurrency to this very day, though. In fact, he has recently purchased front-page ads in The Hindu to promote his e-book.

Most Bitcoin users will have come across the name of Amit Bhardwaj. He is CEO of GBMiners, one of the many Chinese Bitcoin mining pools. However, he was also involved in GainBitcoin, a cloud mining Ponzi scheme. Being involved in a notorious scam is never good for one’s reputation, to say the least. Bhardwaj is also responsible for most of GBMiners’ hashrate, by the look of things.

Bhardwaj is not Giving up on Cryptocurrency Yet

It is not hard to see why GainBitcoin is a Ponzi Scheme, though. Promising investors a flat 10% per month is a clear sign of illegal activity. The company provides cloud mining contracts, which are on the expensive side of the spectrum. Moreover, the Ponzi Scheme relies heavily upon users bringing in new referrals. Bhardwaj has actively promoted this scam in the past. Although the company paid out most users without issues, their business model raises a lot of questions.

It now appears Amit Bhardwaj is back with another project. No cloud mining is involved this time, though. Instead, he is promoting his e-book on cryptocurrency. Buying front-page ads in The Hindu is one way to do exactly that. Then again, the question becomes whether or not anyone should buy an e-book written by someone running a Bitcoin Ponzi scheme. Additionally, Bhardwaj is subject to a change.org petition to have him arrested. It is unclear if anything will come from it, though.

It is evident there are a lot of questions regarding Bhardwaj and his projects. He is deeply involved in cryptocurrency, but likely not for the right reasons. Operating a dodgy website which keeps withdrawals pending for long periods of time is a big red flag. Writing an e-book about cryptocurrency is something else entirely, though. It is an interesting story to keep an eye on, that much is certain.

Get 110 USDT Futures Bonus for FREE!
Tags: Bitcoin NewsGainBitcoinGBMinersponzi scheme
Tweet123Share196ShareSend
BitStarz Player Lands $2,459,124 Record Win! Could you be next big winner? Win up to $1,000,000 in One Spin at CryptoSlots