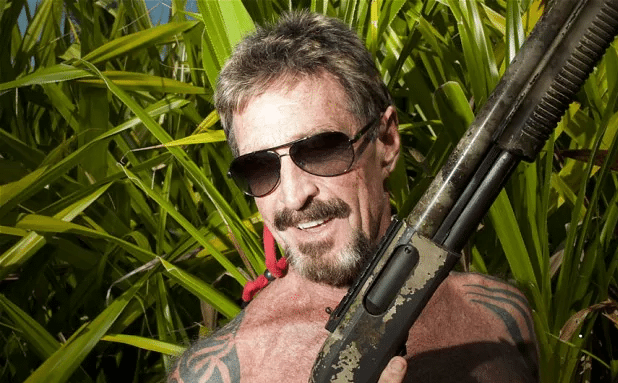 People thought John McAfee was completely insane earlier this year when he made his $500,000 price prediction. The entrepreneur has made no secret of his bullishness for Bitcoin over the years. However, in September, he boldly Tweeted out a price call that seemed straight out of a Lambo-fetishistic Facebook crypto group. Always eccentric, the cyber security expert went a step further than most. Rather than bet a stack of BTC, or even millions of dollars, he declared, without prompt from anyone else, that he would eat his own penis on live TV if the world’s hottest digital currency didn’t get at least halfway to six-figures by 2020.

Today, McAfee surprised everyone by announcing an even bolder claim than that made previously. He Tweeted that he’s voluntarily doubling his price prediction, whilst still being prepared to undergo a shocking act of self-mutilation if he’s wrong.

According to McAfee, his previous prediction was based on an end of 2017 price of $5,000. Naturally, now that the price is double that figure, the creator of one of the world’s most well-known anti-virus software programs has decided that the price by 2020 will be far higher than even he originally anticipated.

McAfee refutes the naysayers who claim that there is nothing to value about Bitcoin. For the entrepreneur, the proof-of-work algorithm which is used to secure the network provides justification for its growing price point. He’s also adamant that the ease with which people can transact using Bitcoin makes it a lot more user friendly and secure than existing “legacy” systems such as credit and debit cards.

Elsewhere in the world of bullish predictions, fellow Bitcoin optimist Michael Novogratz, the former fund manager at Fortress Investment Group believes that the hottest cryptocurrency in the world right now could easily reach $40,000 a piece by the end of 2018. He’s also optimistic about the fortunes of blockchain-based smart contract platform Ethereum. He told CNBC on Monday that he believes ETH could see a similar 4x gain too. Novogratz believes there are huge streams of revenue waiting on the sidelines, about to pour into the space:

There’s a big wave of money coming, not just here but all around the world.

Whether McAfee is correct in his outrageous predictions remains to be seen. What is clear is that the price of Bitcoin continues to hit all-time highs nearly every day. If his amended price call doesn’t scream enough confidence already, he told CNBC on a previous occasion that he “never loses a bet”. Food for thought, if you’ll pardon the vulgarity of such a pun in this context.

Tags: All-time HighbitcoinBitcoin bullBitcoin Newsbitcoin priceJohn McAfeeMichael Novogratz
TweetShare
BitStarz Player Lands $2,459,124 Record Win! Could you be next big winner? Win up to $1,000,000 in One Spin at CryptoSlots