Since hitting $6,800 over a week ago, Bitcoin (BTC) has exploded higher, registering massive gains against the U.S. dollar as bulls have made their presence known in this new year. At the recent rally’s peak, the price of the leading cryptocurrency was $8,450, up some 25% from the bottom.

Despite this strong surge, a key indicator, the Tom DeMark Sequential (better known as the TD Sequential), recently printed a bearish signal. According to a Telegram alerts channel tracking the time-based indicator, which predicted Bitcoin’s bottom at $3,200 in 2018 and the top at $14,000, the BTC/USD chart just printed a “Sell Quasi 9” on the daily. 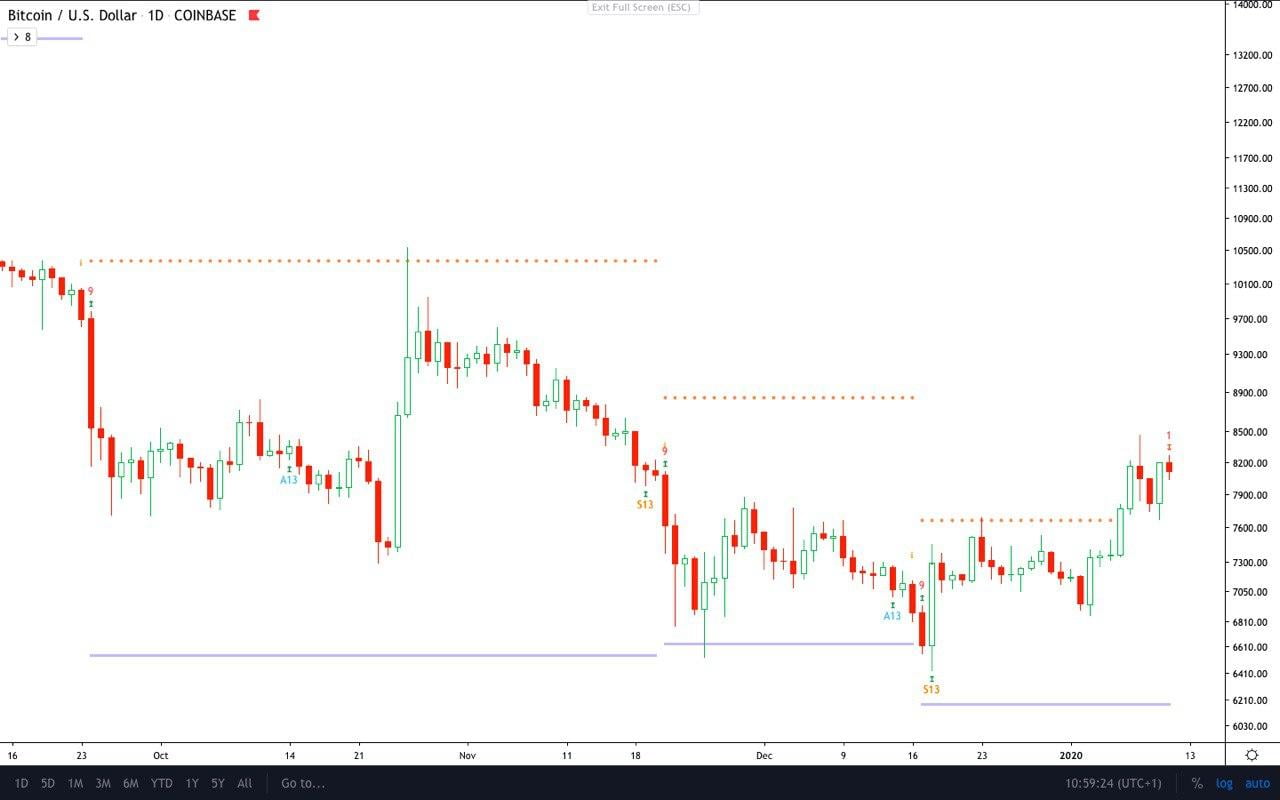 Although “Sell 9” candles are often lead to strong reversals, for they show that a trend has exhausted, analysts aren’t too concerned, for there is a flurry of other technical signals suggesting that bulls are decisively in control.

There are a number of signals suggesting Bitcoin is poised to head higher, no matter what the TD Sequential suggests.

Per previous reports from NewsBTC, a trader going by Storm remarked that according to a  key trend indicator on the four-hour BTC chart, bulls remain in control, adding that he thinks it’s thus worth buying the cryptocurrency between $7,700 to $7,900.

The indicator he mentioned is relevant as it flipped green in the middle of February and didn’t flip over to a bearish reading until September or so, giving those tracking it a chance to bag 300% profits on a Bitcoin trade.

Not to mention, the Lucid Stop and Reversal system recently printed a buy signal on the weekly candle for Bitcoin, which was a signal last seen in March of 2019, and has outperformed BTC by over 1,000% since August 2018, per trader Financial Survivalism.

Historical chart analysis agrees with the positive fundamentals. As noted by analyst Nunya Bizniz, in previous cycles the four months out from Bitcoin’s halvings have always been extremely bullish for the price of BTC.

This simple historical analysis, which is backed up by the fact that investors attempt to “front-run” the halving by buying Bitcoin beforehand, suggests that the crypto market may soon explode higher ahead of the halving, potentially entering into a parabolic uptrend.

So even if there is understandably some bearish retracement from current prices levels, analysts are still bullish on Bitcoin from a more medium-term perspective.

Tags: analysisbitcoinmarketprice
Tweet123Share235ShareSend
Win up to $1,000,000 in One Spin at CryptoSlots