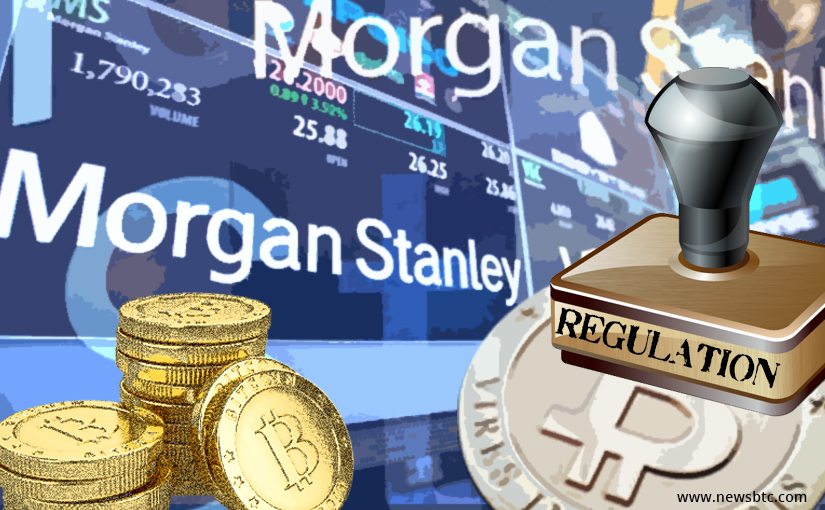 The topic of Bitcoin regulation has always been a touchy subject. It is very difficult, if not impossible, to actively regulate bitcoin itself. Governments can try to regulate service providers, but that’s about it. Morgan Stanley feels more regulation is direly needed before Bitcoin can thrive. This is not entirely surprising by any means, though. The bigger question is how this challenge needs to be tackled.

Over the past few years, governments have attempted to regulate Bitcoin. So far, their efforts have been relatively unsuccessful. More specifically, some regions saw no other option but to officially recognize Bitcoin and cryptocurrencies. Given the decentralized aspect of Bitcoin, regulation is not easy by any means. There is no central authority or provider to regulate.  Despite these hurdles, the Bitcoin price has not stagnated by any means.

Morgan Stanley still feels regulation is the key to success for Bitcoin. The spectacular appreciation of Bitcoin is creating an influx of interest in cryptocurrency. However, banks have a hard time telling investors they should buy into these currencies due to the lack of regulation. Governmental acceptance can be quite beneficial to Bitcoin, that much is evident. Unfortunately, governments often take many years to come to these conclusions, for better or worse.

It is unclear how this regulation should occur, though. Morgan Stanley does not provide any feedback regarding this problem. The bank also is concerned about the value appreciation, as there is no “real reason” for it. However, Morgan Stanley also admitted further gains may be on the horizon for all bitcoin holders. It is evident there is no cookie-cutter regulatory solution for every cryptocurrency in existence, though.

It is rather interesting how banks always rear their head during times of Bitcoin value appreciation. Morgan Stanley seemingly wants to remind people there is a lack of regulation right now. Most people are well aware of this fact. It does not hurt the Bitcoin ecosystem to not see regulatory measures put in place, though. In fact, it is one of the things that makes Bitcoin so appealing. Institutionalized investors may not agree with this assessment. Then again, they can buy bitcoin just like everyone else if they really wanted to.

BitStarz Player Lands $2,459,124 Record Win! Could you be next big winner?
Get 110 USDT Futures Bonus for FREE!
Tags: banksbitcoinBitcoin Newsregulation
Tweet123Share196ShareSend
Win up to $1,000,000 in One Spin at CryptoSlots