New York to Give BitLicense to Coinbase and Ripple 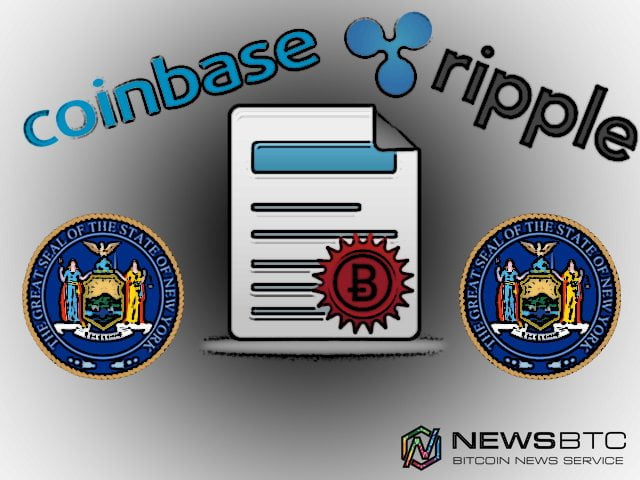 Two more companies are on the brink of obtaining the infamous Bitlicense, which makes Coinbase and Ripple compliant Bitcoin entities in the state of New York. Both companies applied for their license several months ago, but it looks like there is light at the end of the tunnel.

BitLicense for Coinbase and Ripple on the Horizon

According to a source familiar with the matter, both Ripple and Coinbase will receive their BitLicense in the very near future. A notice has also appeared on the NYDFS website stating they received applications from both companies, which is usually only done once all of the necessary paperwork has been completed.

Although it remains to be seen when both companies will receive the BitLicense-  if they will at all, that is – things are looking up for Ripple and Coinbase enthusiasts. The state of New York invented the BitLicense regulatory guidelines last year, as they want to scrutinize Bitcoin companies even more than most other financial institutions in the state.

In doing so, New York became the first – and for now, only – US state to take such drastic measures against Bitcoin companies. Most enterprises did not take kindly to these regulations, and no longer offer their service in the state. The process of getting all of the paperwork and legal documentation together is both time-consuming and costly. But that is not the biggest concern, as BitLicense requires companies to keep an extensive amount of details on all of their customers.

However, some companies – such as Coinbase and Ripple – have gone through the rigorous process of obtaining a BitLicense. Being fully compliant with all state and federal laws is pertinent for any company who wants to target the New York region. Coinbase is one of the world’s largest Bitcoin exchanges, and they have significant backing from various investors. Skipping out on the New York state is not an option for them by any means.

The same can be said for Ripple, as this alternative form of payments wants to partner with the world’s biggest financial institutions and companies. Having a presence in New York is an absolute must in this regard, and they applied for BitLicense under the corporate name of XRP II LLC. Keeping in mind how the Ripple service and currency are known under the XRP name; this does not come as a complete surprise.

The New York State Department of Financial Services has also approved the application of Gemini Trust Company yesterday, which seems to indicate the Bitcoin exchange will be getting their BitLicense very soon as well. More details are expected to be revealed over the coming weeks.