Poloniex Will not Provide Support for Any Potential Bitcoin Forks 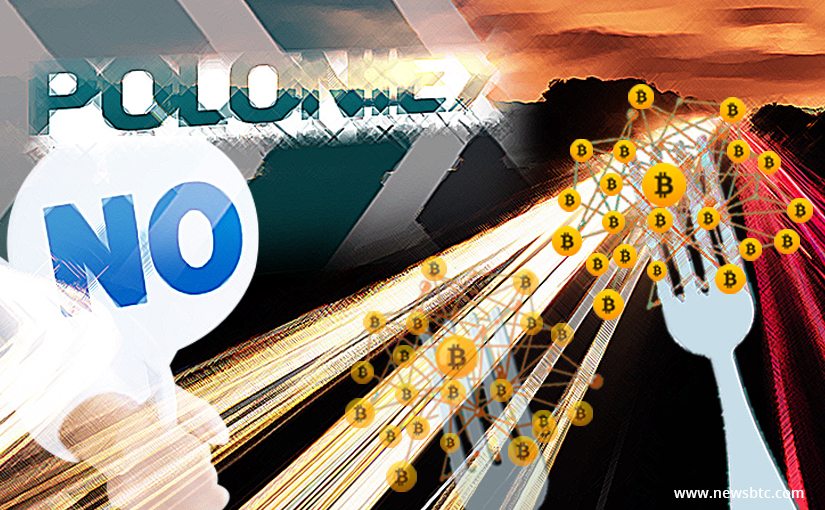 The upcoming Bitcoin hard fork is a problem for cryptocurrency exchanges. Some platforms will support Bitcoin Cash, whereas others won’t. One of the companies not supporting any future fork is Poloniex. That is a rather remarkable decision, to say the least. The company will not commit to supporting specific blockchains emerging after a potential split. Another reason to move money off Poloniex sooner rather than later.

A lot of cryptocurrency traders have been somewhat unhappy with Poloniex lately. The company suffers from withdrawal issues and degrading customer support. Now that they will not support Bitcoin Cash either, things have taken another turn for the worse. It is understandable they want to wait and see how the network evolves, though. A Bitcoin chain split is very difficult t  deal with properly, that much is evident.

A Very Dubious Decision by Poloniex

With the split occurring on August 1st, the company has a decision to make. Either they support the new chain or they don’t. In the case of Poloniex, they will not commit to supporting any chain split right now. They may or may not support both Bitcoin and Bitcoin Cash in the future. This final decision will be made after the network has stabilized. A similar incident occurred with Ethereum and Ethereum Classic. Poloniex quickly listed ETC after the split, though, thus it is possible they will do the same with Bitcoin Cash.

This news is not great for people who use the platform for Bitcoin lending purposes. In fact, their best course of action would be to move funds off Poloniex altogether. Even though trading will not be affected by the chain split, Bitcoin lending might be. It is possible this service will be halted during that time, albeit this is not confirmed yet. Anyone who wants their free Bitcoin Cash needs to move money off Poloniex, though

Storing funds on a third-party platform is never a good idea. This is especially true when it comes to valuable cryptocurrencies. Poloniex has many issues already and not supporting the split will make things worse. Anyone who values their Bitcoin – and altcoins – should store them in a private wallet. Leaving funds on exchanges during such critical time can result in losses if things go awry. Now is the time to take financial security a lot more seriously.