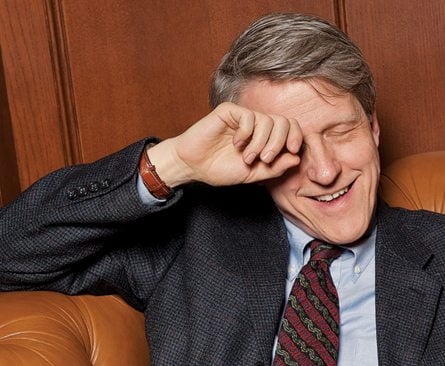 Robert Shiller: “Bitcoin is a Fad” but “I’ll take Bitcoin”

Nobel Prize-winning economist Robert Shiller appeared on CNBC’s “Closing Bell” earlier today. During the interview he commented on the “strange enthusiasm” people seem to have for Bitcoin but ultimately sums up the cryptocurrency up as a “fad”, comparing it to the phenomena of bimetallism.

For those unaware, bimetallism refers to a trend that occurred in the late nineteenth century. People began to favour the use of precious metals like gold as legal tender.

Despite holding this opinion, the American economist does see the potential for profit within the space:

I’ll take bitcoin, too, because I know I can sell it and get out of it. There seems to be some strange enthusiasm for it. People get excited about things like new monetary standards. Remember bimetallism? It went into a fad, everyone was talking about it for a while. And then it faded.

From his statements, Schiller clearly thinks Bitcoin is priced above its worth today at over $5,000. That said, he also thinks gold is similarly overvalued. Declaring it a multi-millennium bubble, he doesn’t think the practical uses for the precious metal match the current price. He acknowledges its utility in some industries but ultimately deems it “a fad that’s lasted thousands of years.”

He goes on to express doubt about the current state of the markets too, noting the appearance of some worrying signs. He claims to be aware of “danger” but hasn’t yet pulled out of his position, and doesn’t advice others to do so either. Drawing a parallel between today’s outlook, and that of 2000, Schiller reminds investors that the market fell around 40 percent soon after. Such a crash would likely prompt even more “strange enthusiasm” for crypto.

It’s the second time in as many months that Professor Schiller has spoken publicly about Bitcoin. In early September, he debated CNBC’s crypto expert, Brian Kelly, in a “Bitcoin Battle Royale“. During the conversation, the Nobel Prize winner claimed that Bitcoin is similar to a bubble and that bubbles are driven by stories rather than metrics. Mentioning the mysterious birth of the planet’s most successful cryptocurrency and undermining its potential utility, Schiller said:

It’s the quality of the story that’s attracting all this interest, and it’s not necessarily sustainable… what’s driving the market. It’s not fundamentals. It’s not like this is a fundamentally important thing, this Bitcoin.

Tags: bitcoinbitcoin bubbleBitcoin NewsBubbleeconomistgoldmarketMarket OutlookNobel PrizeprofessorProfitrobert shillerTrader
TweetShare
BitStarz Player Lands $2,459,124 Record Win! Could you be next big winner? Win up to $1,000,000 in One Spin at CryptoSlots