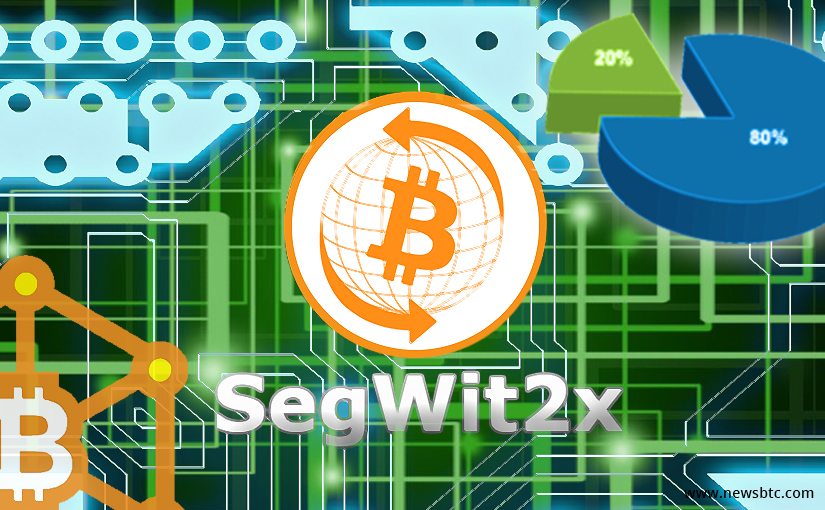 When SegWit2x was first announced, people doubted this solution. More specifically, they were uncertain if the solution would reach the required 80% network hashrate threshold. It now appears this level is well within reach. The latest pool to signal SegWit2x is none other than BTCC. Things are looking quite positive for this solution, to say the least.

It is quite interesting to see SegWit2x gain support so quickly. It is true the scaling debate has gone on for far too long. A solution needs to be found and activated sooner rather than later. SegWit2x seems to be the solution that will win out in the end. According to Coin.dance, it now has 76.4% mining pool support. It is only a matter of time until the 80$ threshold is reached. Once that happens, activation of SegWit2x is merely a matter of time.

SegWit2x is on the Right Track

The latest pool to start signaling the New York Agreement is BTCC. A lot of miners were concerned about the pool going down for several hours today. It appears the team made some major changes under the hood to support SegWit2x moving forward. With this pool on board, reaching the 80% mark will be a trivial matter. This is good news for everyone supporting this solution.

It will take some time until these changes reflect on the network, though. Right now, most of the mined blocks support Emergent Consensus or BIP 141. SegWit2x is in third place, but that is only normal. The pools only recently started signaling this solution, and the network needs to catch up with the changes. Considering how some of the world’s biggest mining pools all signal this solution, the rankings will shift sooner rather than later.

Moreover, this scaling solution also has a fair bit of economic support. Several dozen cryptocurrency companies support SegWit2x as of right now. It is only a matter of time until we see this solution activate on the network. Whether or not this will cause a chain split, remains to be seen, though. Not everyone is in favor of this solution by any means, which is to be expected. The coming weeks will be quite interesting for Bitcoin and the entire community, that much is certain.

BitStarz Player Lands $2,459,124 Record Win! Could you be next big winner?
Tags: bitcoinBitcoin NewsscalingSegWit2x
Tweet123Share196ShareSend
Win up to $1,000,000 in One Spin at CryptoSlots