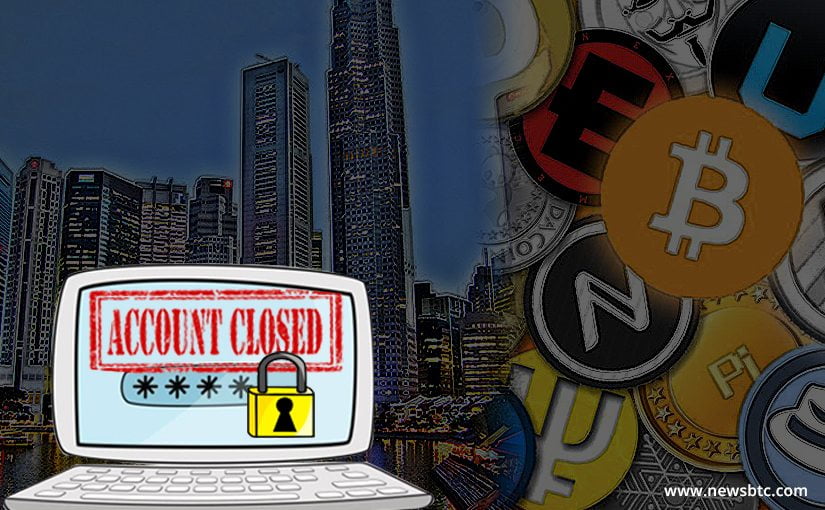 Cryptocurrency users around the world often suffer from banking issues. More specifically, a lot of financial institutions tend to close bank accounts related to cryptocurrency. Although such harsh actions have become less apparent, they can still occur now and then. Over in Singapore, various firms and consumers have seen bank accounts being closed for no apparent reason. This seemingly indicates how local banks are cracking down on cryptocurrency activity.

There is never a good reason to close bank accounts related to cryptocurrency. That is, unless the use of Bitcoin is officially illegal in said country. In Singapore, there is no official Bitcoin regulation, which means cryptocurrency is not prohibited either. For some reason, various local banks are closing down user accounts regardless. It does not appear the local government is involved in this process, which is pretty unusual. Around a dozen companies have been affected so far. None of the financial institutions ever gave an official reason for their decision.

All of this shows how cryptocurrency firms get scrutinized even more than any other company. It is almost as if certain authorities don’t want Bitcoin and altcoins to succeed. The Monetary Authority of Singapore doesn’t meddle with commercial decisions taken by banks. It is evident these are all in-house decisions by financial institutions, albeit an official explanation is more than warranted. It is evident something is going on right now, but no one knows the exact reason.

One of the firms affected is CoinHako. Their DBS Group Holdings bank account was closed a few days ago. This is pretty interesting, considering there was no indication something like that would happen. As a result, the company can no longer process Singapore dollar-based deposits and withdrawals. A problematic turn of events for this particular company, to say the least. Giving banks carte blanche in Singapore is not the answer to these problems, though. Eliminating the company just because they “feel like it” is not acceptable whatsoever.

For the time being, the cryptocurrency situation in Singapore is in jeopardy. It is evident local banks don’t want Bitcoin to take over their business in the [near] future. However, there needs to be a level playing field to stimulate competition. Right now, that is not the case and the MAS has no plans to interfere. It will be interesting to see how this situation evolves regarding these bank accounts. An interesting yet dangerous precedent has been set, that much is evident.

Tags: Bank AccountsbitcoinBitcoin Newssingapore
TweetShare
BitStarz Player Lands $2,459,124 Record Win! Could you be next big winner? Win up to $1,000,000 in One Spin at CryptoSlots