Tether Limited “Investing” in Bitcoin (BTC) is a Bullish Signal

Tether and iFinex, the parent company, are controversial though they play a crucial role in the ecosystem. Despite their claim that every USDT in circulation is pegged 1:1 against the USD, it appears that they are also investing in Bitcoin and other assets according to the latest Supreme Court transcript.

The controversy around Tether Limited, the official issuer of USDT or Tether, appears to be perpetual. A few weeks after the New York office of the Attorney General accused BitFinex of fraud, it is now emerging that Tether Limited used some of their reserves to invest in Bitcoin and other “assets” extending beyond cash and its equivalent as mentioned in their homepage. Questioning this decision, New York Supreme Court judge Joel M. Cohen said:

“Tether sounded to me like sort of the calm in the storm of cryptocurrency trading. And so, if Tether is backed by Bitcoin, how is that consistent? If some of your assets are in a volatile currency that Tether is supposed to somehow modulate, that seems like it’s playing into what they are saying.”

While the role of BitFinex and Tether cannot be understated, their somewhat opaque operation is everything against blockchain principles. Therefore, this revelation will draw more questions weeks after BitFinex commingled with Tether (USDT) reserves. 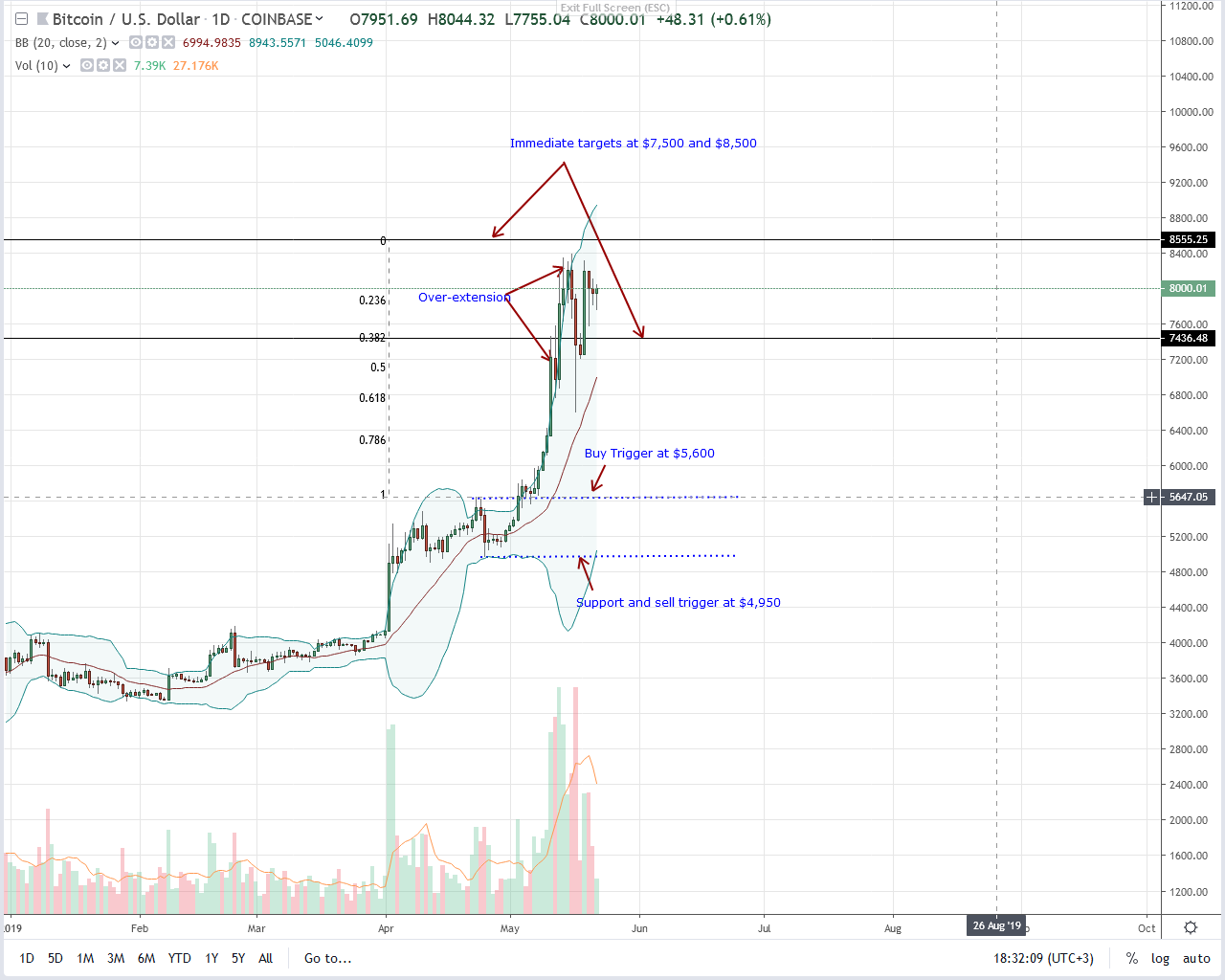 At the time of press, Bitcoin (BTC) is down 1.6 percent and back in red. Even so, the fact that prices is trending inside May 19th high low is bullish from an effort versus result perspective.

Although we expect BTC bulls to take charge and edge higher in line with our interpretation of candlestick arrangements, bears of May 17th may flow back if bulls fail to close above $8,500 as mentioned in our last BTC/USD trade plan.

If anything, it is crucial that buyers overcome this resistance, break above this minor consolidation as bulls aim for $10k. If not and prices print lower in days ahead, wiping out gains of May 19th as bears of May 16th and 17th flow back confirming the double bar bear reversal pattern, then prices may retest $6,600.

To reiterate our stance, buyers are in control. However, it is ideal that prices close above $8,500. Propelling this up thrust should be high transaction volumes exceeding 25k and most importantly 47k of May 13th. Conversely, any drop below $6,600 should be with equally high volumes halting our stance.