Bitcoin has faced a strong 20% correction over the past five or six days. This drop has brought the leading cryptocurrency from the local highs near $12,100 to a low of $9,800, marking the most notable retracement in months.

Analysts remain long-term optimistic about BTC’s bull case. However, the severity of the recent correction has made analysts cautious as to what will happen to Bitcoin’s price in the coming weeks.

There is a price level, though, that if retaken, will convince a number of analysts that Bitcoin’s bull trend remains intact.

According to a number of technical analysts, Bitcoin retaking $11,200 will be pivotal for the bull case moving forward.

The head of technical analysis at Blockfyre, a crypto research firm, commented on the matter:

This was echoed by another pseudonymous analyst that predicted the ongoing correction.

They noted that Bitcoin needs a “significant daily close above $11,200” to invalidate the bearish case that they’re currently pricing in. Referencing the chart below, the analyst wrote:

“Somehow looks even worse than when I left. I’ll be looking for bounces to add to shorts but honestly, I’m not even sure we get those. My trade & my idea will be invalidated if we get a significant daily close above $11200. Until then I’m going to be a full-blown beartard.” 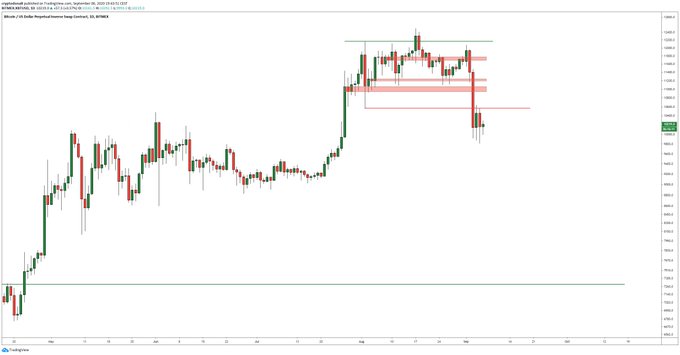 Although Bitcoin’s near to medium-term future is uncertain, those that are focusing on the asset’s long-term prospects say that now may be a good time to begin accumulation. Their sentiment is that in every one of BTC’s historical bear markets, it regularly pulled 20-40% back prior to a move toward the upside.

“The correction in Bitcoin and Ethereum are close to having filled all the gaps on the week day only charts (seems to work). These are times to add, when the short term guys with leverage have been washed out. Will it stabilize here? Who knows, but it feels like the add zone to stack some more.”

Willy Woo, an on-chain analyst that two weeks ago predicted the ongoing correction, has echoed the sentiment. On September 5th, Woo remarked that if one is “playing the big swings,” it’s now “not a bad time to buy back in.”