With Bitcoin failing to break past the highs it established earlier this year, there have been some commentators seriously considering a steep correction.

Ross Ulbricht, the founder of the Silk Road and one of the cryptocurrency’s earliest adopters, postulated that there’s a serious chance Bitcoin could revisit the $3,000s and maybe even lower. Ulbricht cited Elliot Wave analysis, which states that markets move in predictable wave-like patterns due to investor psychology.

Others have echoed this, with some expecting a move to the $1,000s.

But an on-chain signal and a technical signal suggest that Bitcoin is about to begin a long-term bull run, negating the expectations of a return to recent macro lows.

Some saw this as a sign of a “miner capitulation” but according to Bitcoin chartist Nunya Bizniz, it allowed the cryptocurrency to print a textbook bullish sign. Referencing the chart below, he wrote:

“Today is the 9th monthly downward DA What makes this one unique is it’s the 1st to occur post halving. Monthly DDA’s may signal miner capitulation and market bottoms.”

As can be seen in the chart he shared below, each “monthly downward difficulty adjustment” seems to have arrived when Bitcoin reverses into a bull market.

Adding to this, an analyst observed that Bitcoin’s two-week relative strength index looks like it did at the start of the previous bull run.

Don’t Count Out a Correction in the Short Run

Don’t count out a correction in the near term, despite the positive confluence of long-term technical signals.

As reported by NewsBTC previously, blockchain analytics firm IntoTheBlock currently sees Bitcoin as fundamentally “bearish” due to a confluence of on-chain and order book trends.

Adding to the expectations of Bitcoin dropping in the near term, an analyst shared that BTC’s chart is printing a textbook bearish divergence between a trend indicator and its price.

The divergence persisting will confirm that the uptrend from March’s lows is decisively over, the commentator remarked:

“Without compounding the obvious, without a spike to undo the developing BTC divergence, this is the top.” 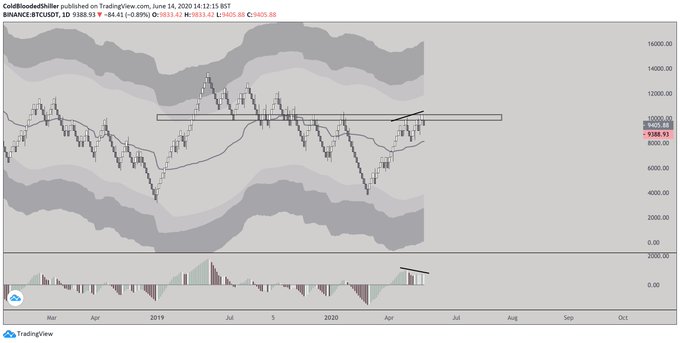