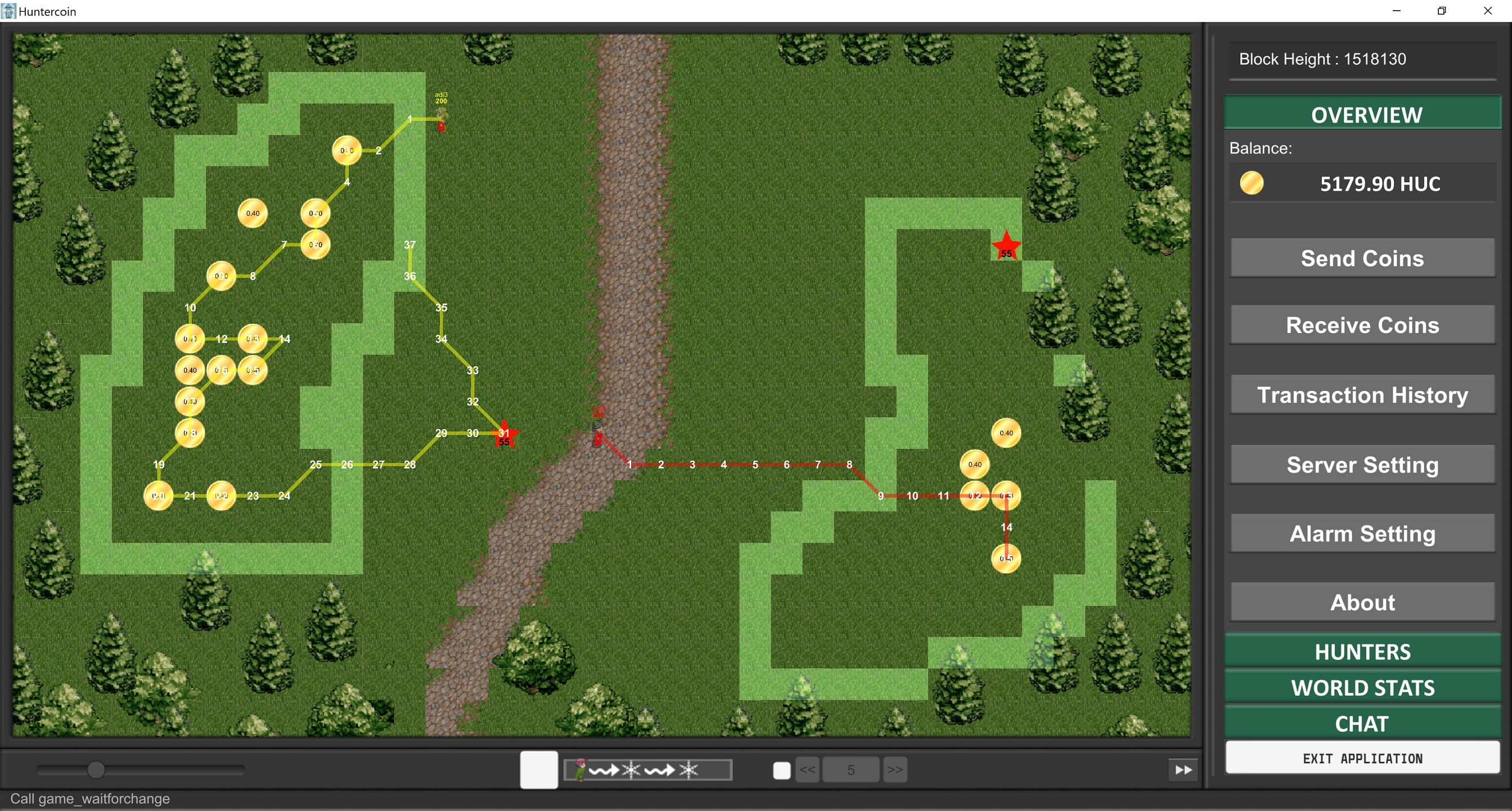 Blockchain gaming has been in the spotlight lately; video games using the technology have appeared in mainstream media and academic journals, and even have a professional educational website. Most are focused on in-game payments and smart property integration, but it’s possible to build completely decentralized online worlds.

Huntercoin set out with that as a goal, and it’s actually the oldest of the blockchain gaming bunch. It came out in early 2014 to much fanfare, but development slowed due to the unfortunate death of lead developer Mikhail Sindeyev. The Huntercoin protocol and client grew outdated over the following couple of years, but now both have received massive upgrades thanks to the renewed effort of a reorganized team.

Huntercoin’s initial claim to fame was human mining—the ability for people to manually work for newly-minted huntercoins (HUC). This is accomplished via a simple competitive game played entirely on the Huntercoin blockchain via P2P network, effectively the first fully decentralized autonomous massive multiplayer online game. While a remarkable innovation, this created some unique new dilemmas that the developers have been working hard to solve.

Part of the appeal of a decentralized autonomous MMO is that it leads to self-regulating, almost lifelike game environments. Like an impartial god, the developers merely design the ecosystem, then sit back and watch events unfold. There are no in-game mods or admins, and intervention can only occur via a hard fork of the Huntercoin blockchain to update its protocol. This is in stark contrast to game economies such as World of Warcraft’s or EVE Online’s, over which the developers maintain central control.

That means blockchain gaming worlds must be designed very carefully, or else their economies will become unbalanced and potentially collapse. The Huntercoin world was overtaken by a player (or players) known as the Dominator, who controlled most of the coin supply. A fee increase was instituted in an attempt to combat the problem, but when HUC prices began to rise again, many blockchain gaming fans complained this solution was expensive.

A hard fork was clearly necessary. To accommodate rising prices, the value of a Hunter was cut in half to 100 HUC, and the fees for Hunter creation and combat (the Destruct fee) were lowered, as well. Meanwhile, developer Wiggi was tasked with improving the gameplay with a focus on casual blockchain gaming fans who have less time to dedicate.

One major problem was the time it took to effectively get into and out of the game; Hunters would spawn randomly on the map, sometimes far from the nearest coins to collect, as did the “banks” where you could log them out to get your coins back. Instead, Hunters now spawn on the rings around coin farms—the primary battlegrounds—where they can also bank, as well. To liven things up further, coins periodically become inaccessible or “ghosted,” then unleashed on the world all at once.

Also included is a spectator mode for Hunters, wherein they also become inaccessible if they don’t move soon enough after spawning. This serves two purposes: first, it allows players to decide if they like an area before spawning a Hunter there, or logs them out automatically if they forget to move. Second, it allows developers to use Hunters as a means of interacting with the Huntercoin blockchain without them getting killed, which makes it easier to build additional game mods on top of it.

Unfortunately, running an entire game world on the blockchain can be very taxing on players’ hardware. In particular, those with older hard drives would experience very sluggish syncing times, and the full blockchain takes up a lot of space at around 17 GB. Also, hiccups with the client would often force a restart due to its reliance on obsolete Bitcoin code (from which Huntercoin was originally forked via Namecoin).

Developer Daniel Kraft—who works on both Namecoin and Huntercoin—has reimplemented Huntercoin onto Bitcoin’s latest codebase, creating the Huntercore client. Both faster and less buggy than the original client, it features blockchain pruning, wherein old transactions with spent outputs are deleted. The client only needs unspent transactions to calculate your HUC balance, which amount to 550 MB and around 1 GB including the game data.

Additionally featured is the HD or “hierarchical deterministic” wallet. In this system, public/private keys are derived from an initial “seed” value, typically another key, allowing them to be easily backed up with very little stored information. In addition to security, it also provides convenience by allowing the game to be played across multiple clients on different devices at once.

You can test it out along with the hardfork changes by downloading and running the new all-in-one easy installer, which was used to make the image for this article. It allows those new to blockchain gaming to set up Huntercoin in minutes, a process that previously was more difficult and time consuming than for mainstream computer games.