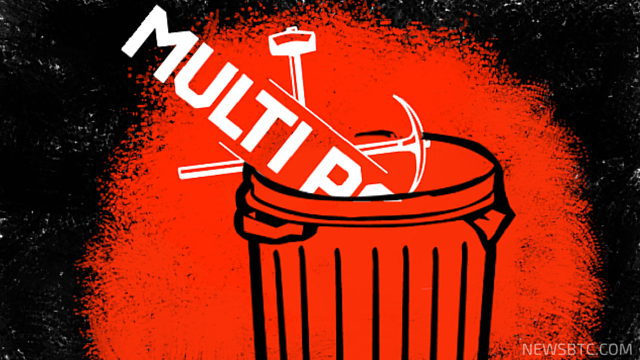 Europe-based bitcoin exchange Cex.IO has announced the termination of their support for altcoins and GHash.IO Multipool, shifting their focus toward higher-volume markets such as Bitcoin and Litecoin. Trading pairs including IXC, DVC, POT, ANC, MEC, WDC, FTC, DGB, USDE, MYR and AUR have been removed, and Multipool by GHash.IO has been discontinued for all miners.

“GHash.IO Multipool will be discontinued. There is no need to change mining settings for the Multipool, as all shares will be automatically redirected to LTC+DOGE mining pool. Those users who are already mining on Multipool and LTC+DOGE pool simultaneously, please make sure that workers on both pools are titled differently,” announced the Cex.IO team.

However, users with wallets of unsupported altcoins will be charged 0.00015 Bitcoin per wallet per day until the balance reaches 0. In other words, users maintaining altcoin-based wallets except Bitcoin, Litecoin, Dogecoin and Namecoin will be charged 6 cents per day as a fixed commission fee.

“We will be imposing a wallet fee for storage of some discontinued altcoins, which will be used for running the support of the wallets. . . In order to avoid this fee, we recommend converting your coins to BTC or LTC,” stated the Cex.IO team.

With the integration of a browser-based financial charting platform provided by TradingView, Cex.IO aims to serve high-profile and active Bitcoin traders exclusively. Since late October, the Cex.IO platform has provided Bitcoin traders with in-depth data analysis of the Bitcoin blockchain and network, including its transaction and exchange data for Bitcoin-to-US dollars, Bitcoin-to-euros and bitcoin-to-rublea.

“Together with information that can be obtained on TradingView, getting profit by trading highly volatile cryptocurrencies on Cex.IO has become even more accessible,” said Cex.IO Chief Editor Helga Danova.

Based on the recent performance of altcoins, Cex.IO recognized the declining trend of major cryptocurrencies such as Dogecoin and Namecoin. Namecoin, for example, has recorded a 4.18% decrease in price over the last 24 hours, and has almost halved since September, 2015.