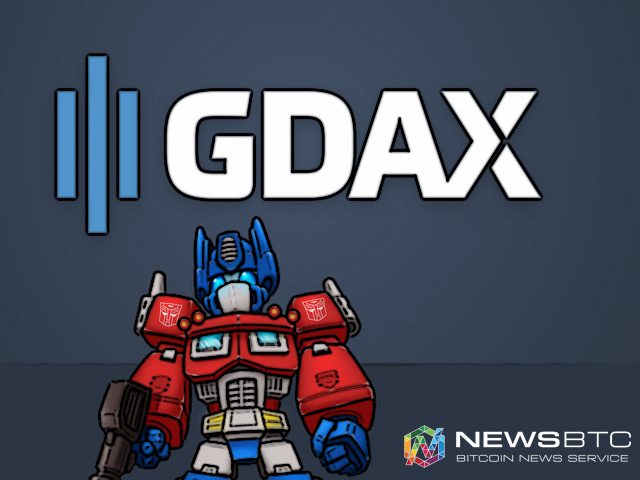 Exciting times are ahead for Coinbase customers and Ethereum enthusiasts, as the exchange platform will support ETH trading soon. Additionally, the company will rebrand to GDAX, and the new website and logo will be coming soon.

Similar to most other Bitcoin exchanges in the world, there seems to be an overwhelming demand from customers to trade Ethereum on the Coinbase platform. In doing so, the company joins a very long list, and they have been one of the last Bitcoin trading platforms not to add Ethereum for quite some time now.

But by the look of things, there was a good reason for this delay, as the company had plans to rebrand to GDAX. Global Digital Asset Exchange, as the Coinbase platform will be called in the future, will better highlight the exchange business the team is running. A new logo and website will follow very shortly.

As the new name suggest, GDAX may not be just focusing on Bitcoin and Ethereum in the future. According to various sources, the enterprise has been keeping a close eye on The DAO and its associated tokens. However, there are are some legal and business questions that need to be answered, and the success of The DAO is not guaranteed by any means.

But the biggest announcement is the addition of Ethereum trading to the new GDAX platform, which will be enabled as of May 24, 2016. With the growing interest in this alternative cryptocurrency and the demand by Coinbase users, there was no point in trying to resist obvious consumer demand.

Coinbase/GDAX joins a very long list of Bitcoin exchanges who have added Ethereum in the past. Bitfinex and Kraken were two of the major Bitcoin exchanges to do so a few months ago, and ever since, platforms from all over the world have followed suit.  This is very good news for Ethereum enthusiasts all over the world, as they have yet another platform at their disposal to buy and sell the cryptocurrency.

It is not the first time the names of Coinbase and Ethereum are mentioned in the same breath.Ethereum developer Vitalik Buterin held a meeting at Coinbase HQ in March of 2016, but the company never intended to do much beyond that point. However, all of that changed when Microsoft Azure took the plunge with their blockchain-as-a-service business model.

There are also rumors circulating about GDAX potentially adding Litecoin to their trading platform, yet no official sources are confirming this news for now. An API call with an LTC ticker had shown up on Reddit, but the page has been made inaccessible once again. It is possible Litecoin will be added as well over time, albeit no official confirmation has been given to us.

Tags: apibitcoincoinbaseETHethereumexchangeGDAXlitecoinltcNewstrading
Tweet123Share196ShareSend
Win up to $1,000,000 in One Spin at CryptoSlots