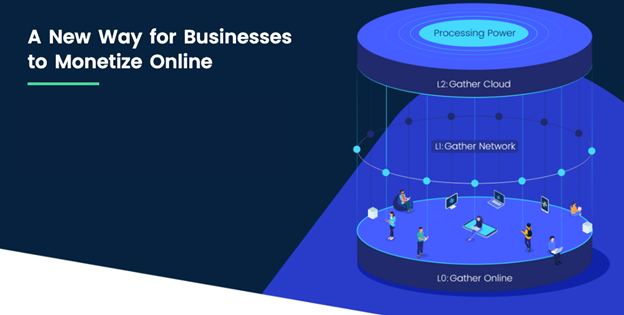 How Gather is Developing an Ad-Free Web

Everyone is familiar with the modern web experience. Use a site that you don’t pay a subscription for, you’ll be served advertisements. Use a site you pay a subscription for, you often still get served advertisements. This traditional and outdated model is shattered by users of Gather Network. As a user, once you opt into a Gather site, you are paid based on time spent on the app or website as the site is paid for having you browse. The user is not served a single advertisement while perusing the site.

The idea of using the internet without monetization from a separate advertising party feeding you digital billboards is strange. Enter digital monetization via processing power. Rather than negotiate advertising terms, Gather Network uses a hybrid POS and PoW consensus to establish security and provide incentives for network participants by utilizing the user’s idle processing power. Visitors to a site opt-in with a click when entering which allows them to passively share their idle computing power which is aggregated to Gather’s cloud network. This action allows both the user and the host website/app to earn money.

As we move further into the latter stages of capitalism, there has been an undeniable increase in advertising spaces and aggressive marketing in general. Gather Network’s ecosystem of aggregating idle computing power not only allows website hosts to choose an ad-free avenue but streaming and subscription sites like Netflix can compound revenue with Gather.

The option to use digital monetization via processing power will lift a huge burden off the news industry which is plagued with paywalls and ad revenue pressure. Sites that attempted to revolutionize local sports news by hiring respective local reporters and creating a flat subscription fee like The Athletic can now explore entering the Gather ecosystem as an alternative monetization model.

The Gather Network governance and native token is GTH, which will be the default payment within the ecosystem. Gather also offers other payouts in Bitcoin and in local fiat currencies where applicable, and partners with a variety of blockchain projects to include their native currencies as payout options.

The base layer of the Gather ecosystem is where processing power from users is aggregated through the Gather hardware and into their cloud. On top of that is the protocol layer where stakeholders earn yield for providing network security. The Gather Cloud then redistributes the processing power back to their web/app clients in the cryptocurrency that they choose.

As the internet and Web 2.0 spirals toward more optimized layouts to appeal to advertisers, many sites never have a chance to turn any profit due to the functionality of their site or lack of paid subscribers. A new system has been enacted by Gather Network to create a neutral playing field and a new set of rules for sites or apps that have been disenfranchised by the current system.

The added value of helping users and the host get paid is the direction that consumers will choose in the future when the marketplace becomes aware of the ability to passively participate in a system that rewards all parties.