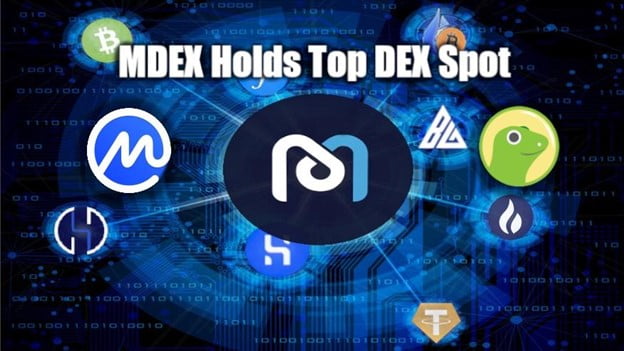 For most of 2020, the buzz word in the cryptosphere was ‘DeFi’. The sprawling movements and burgeoning growth in the decentralized exchange space in the last months are now screaming ‘DEX’.

And if the past month is anything to go by, the spectacular moves from Heco-based DEX MDEX.COM appear to have entrenched its Number One leading position as the current DEX king on both Coinmarketcap and CoinGecko.

Condensing One Year’s Journey Worth into One Month

Recently launched on January 19, 2021, a month later on February 20, the young DEX (decentralized exchange) managed to exceed USD 5 billion in 24-hour trading volumes, which astoundingly eclipsed the cumulative volumes of all the rest of the other DEXes on that day.

When compared with leading DEX Uniswap, which took 840 days to exceed USD 100 billion in cumulative trading volumes, MDEX took just 50 days! How did a relatively unknown DEX manage such a feat?

We will of course do well to remember that decentralization is at the core of the entire crypto movement. Satoshi’s vision for Bitcoin as an alternative to mainstream economies was, at the heart of its foundation, a currency to facilitate decentralized peer to peer exchanges.

Another factor to consider are the tightening regulations on CEXes, which impose many restrictions. These moves result in project delistings, exchange relocations or shutdowns. For DEXes, however, this presents an opportunity to take over the marketplace.

Already in late 2020, the rise of Uniswap showed that DEXes were ready to facilitate decentralized trades. In 2021, with even better technologies and mechanisms, more and more DEXes are rising to prominence and nailing the coveted USD 1 billion in 24-hour trading volumes.

For users who prefer to trade anonymously, DEXes are the answer. DEXes offer privacy, cheaper transaction fees, and little incentive for hackers because funds are traded peer-to-peer and not deposited in the massive honeypots on CEXes that hackers can target.

For quite a while, Uniswap was the undisputed leader, offering the kind of liquidity that was only found on CEXes. However, Uniswap is on the Ethereum mainnet and the increasing congestion and subsequent high gas fees have been deterring many users and projects.

It is no accident why MDEX has taken over Uniswap’s leading position and captured major market share. An important factor is its zero-to-negative fee offerings, made possible as a result of its implementation of a unique ‘dual-chain dual-mining’ mechanism on the platform.

Most DEXes implement a liquidity pool mining whereas MDEX implements both liquidity and transaction mining. As MDEX CMO KiKo explains:

On MDEX, its low handling fees of only 0.1 cent per swap, means that 1 USDT of HT can support nearly 1,000 swap transactions. Combined with low slippage, good depth and high APY for transaction and liquidity mining, trading on MDEX can generally achieve zero and even negative transaction fees because, excluding slippage losses, the MDX rewards generated by the MDEX platform users for trading and mining are much higher than the transaction fees required for the transactions.

In addition, platform user experience has been designed to be simple and user-friendly, and the MDX token is designed with community governance in mind.

MDEX.COM: All about Maintaining Excellence and Innovation

Currently MDEX.COM is the DEX with the lowest transaction fees, with the platform having paid out more than USD 310 million in transaction fee subsidies. Cumulative Liquidity Pool rewards are USD 210 million with the LP yield rate the highest in the entire ecosystem.

As the first DEX to implement the utilization of transaction fees for token buybacks and burns, MDEX maintains that innovation will continue to be a part of its overall vision. The DEX has indicated that its goal is to create a comprehensive DeFi ecosystem that integrates DEX, IMO (Initial Membership Offering) and DAO (Decentralized Autonomous Organization) and continue to provide excellent services and quality trading experience.

As always, community focus will stay paramount in all upcoming developments.

To know more about MDEX.COM, its Official Website is https://mdex.com/#/