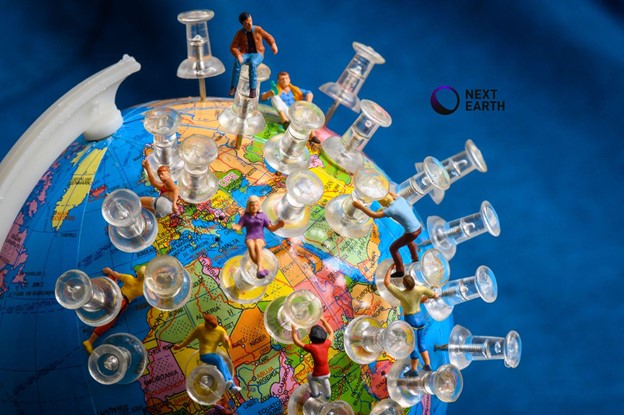 Traditional and digital asset markets alike have been rattled in recent weeks with steep downturns. But for Next Earth, this is a time of fast-paced growth.

Next Earth’s NXTT token’s presale commenced on January 22 on Next Earth’s proprietary Launchpad platform, which provided a ticket-based system that the Next Earth community preferred for the token presale, in addition to the flexibility that enabled the most efficient and equitable distribution of tokens for the economy in the long-term. DEX trading started on January 27.

In total, 3,100 users participated in the presale, raising $2.1 million. More than 400,000 non-fungible tokens (NFTs) have been minted, which will be used to reward users for creating content and engaging with the platform.

The crypto crash has actually been great for Next Earth. It’s shown that there is a real need for a platform like Next Earth that provides a more equitable and sustainable economy.

10% of the value of Next Earth transactions are donated to environmental initiatives such as The Ocean Cleanup, Kiss the Ground, SEE Turtles, and Amazon Watch.

Next Earth has a strong focus on sustainability, and it’s one of the things that makes our platform so unique. We’re excited to see how the community grows and evolves, as they’re committed to doing everything they can to make sure that it’s a positive force for good.

Beyond donating proceeds, Next Earth aims to ultimately evolve into a DAO-controlled, self-sustaining economy that gives back more than it takes. A DAO, or Decentralized Autonomous Organization, is an organization that is controlled by smart contracts on the blockchain, rather than by people.

Amidst a crypto crash, the metaverse stays strong

As every crypto trader knows all too well, the price of bitcoin and other cryptocurrencies have plummeted, with some dropping by more than 50 percent. But while some investors are cashing out, others are looking to the metaverse for stability.

The metaverse is a digital world that exists online and is populated by avatars representing real people. It is often compared to virtual reality, but the two are actually quite different. VR is a closed system that can be experienced only through a headset, while the metaverse is open to anyone with an internet connection.

The metaverse has been around for over a decade, but it has only recently begun to gain mainstream attention. This is largely due to the arrival of blockchain technology, which has made it possible to create decentralized virtual worlds.

Despite the crypto crash, Next Earth is still seeing strong growth, indicating that the metaverse offers more than just token prices. In a world where prices can swing wildly from one day to the next, the metaverse provides a safe and secure space where people can come together.

So while some investors are cashing out, others are looking to the metaverse.

How Poor User Experiences Lower the Market Cap for NFTs

Top 5 Bitcoin Mining Softwares To Look Out For

How is Superhero NFT Wars Merging Gamefi and SocialFi