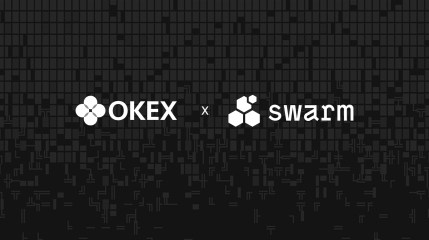 OKEx, the global crypto derivatives and spot trading exchange platform has announced its latest inclusion to the list of supported cryptocurrencies. The platform, on June 22 added BZZ – the native crypto asset of Swarm by enabling deposits. Once adequate deposit amounts are reached, the asset will be available for spot trading against USDT.

Swarm is created by the very minds that were behind the Ethereum protocol. Developed by Vitalik Buterin, Gavin Wood and Jeffrey Wilcke, Swarm provides decentralized storage and communications protocol for dApps on the Ethereum blockchain. It is designed as a self-sustaining protocol with a built-in smart contract-driven incentive system on ETH blockchain which is powered by the BZZ token.

Announcing the listing of BZZ, CEO of OKEx Jay Hao said, “Swarm has brought a whole new perspective to the mining ecosystem. Its self-sustainability stance for real decentralization and positive feedback from various communities have proven Swarm to be very popular among crypto enthusiasts. We have observed an increased number of active nodes from Swarm — and with more of its utility token, BZZ, being circulated among different communities, there is more potential for the project to grow. We are pleased to be working hand-in-hand with Swarm toward an increasingly decentralized future.”

With Swarm v1 due for launch soon, the project has gained a lot of attention. It has raised investments from some of the leading names in the industry including Alphemy Capital, Bitscale Capital, DFG, KR1, HashKey, NGC Ventures, The LAO, LD Capital, YBB Foundation, Waterdrip Capital and more. The project has already raised over $6 million in private financing.

With a maximum supply of 62.5 million pieces, the BZZ token is used to pay the bandwidth and storage rewards. Meanwhile, Swarm will be organizing an airdrop, offering a million BZZ  distributed across all the addresses that have participated on the test network.