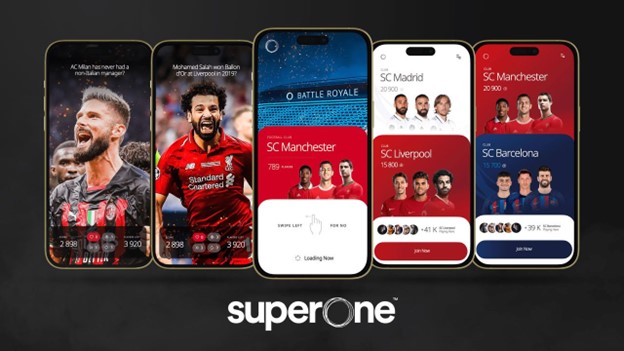 The partnership with Footballco and FIFPRO will enhance the fan experience across digital gaming while promoting the rights of professional football players across the planet.

SuperOne, a leading blockchain gaming company, is teaming up with two of football’s most prominent organizations, Footballco, the world’s top football media company, and FIFPRO, the global football players’ union, to license the game content and promote value-creation for football players in the growing digital economy. According to the statement released on Thursday, the three companies aim to engage billions of sports and entertainment fans in gamified communities within the digital gaming economy.

“Footballco and FIFPRO represent the two most prominent avenues to achieve mass adoption in the football gaming industry,” said Andreas Christensen, Techowner and Founder of SuperOne. “This trinity of football collaboration will disrupt the gaming industry, and we are humble, yet proud, of this achievement.”

Launched in 2019, SuperOne is creating the first gamified social network allowing fans to engage with their favourite football athletes and participate in their ultimate fandom trivia battle. Furthermore, the platform empowers all stakeholders to benefit from the ecosystem in a fair and real-time revenue distribution from their participation.

The partnership with Footballco, the world’s largest football content and media business – with brands such as Goal, Kooora and Mundial– opens up SuperOne to the global football fandom. SuperOne will benefit greatly in global exposure from Footballco’s 640 million fans around the world, with the latter generating over a billion video views per month.

Additionally, SuperOne joins as an exclusive presenting partner of the GOAL50, the biggest fan-voted player award that awards the top 50 football players every year. As a presenting partner, the digital gaming platform will also enjoy an integrated content and media campaign in eight top languages.

“We are delighted to work with SuperOne to help launch their exciting offering to football fans worldwide. We share a common goal of providing football fans with memorable and rewarding digital experiences.”

SuperOne will also enter into a partnership with FIFPRO, the premier players’ union that unites the voice of over 65,000 professional footballers and their national unions. Through the FIFPRO Commercial Enterprises B.V, SuperOne will enter into an agreement to get the world’s most comprehensive package of name, image and likeness rights of active football players to use in their digital game. The two enter an innovative partnership that will “champion the rights of professional players worldwide,” FIFPRO’s Commercial Director, Andrew Orsatti said.

“We’ve combined the passion of football fans with brain-twisting trivia, in a blood-pumping race against the clock, with great prizes on offer,” Orsatti added.” It’s an ideal companion in between watching all the drama of the World Cup in Qatar.”

Finally, as the world enjoys the World Cup in Qatar, SuperOne looks to offer sports fans an avenue to fully show their fanaticism, the report reads. The platform allows fans to relate to other fans, engage with their shared interests, and find new methods to prove their fanship. As such, SuperOne has created a unique trivia battle game aimed at football fans whereby fans can compete against each other to show their knowledge and win exciting prizes. The first to be released is a Battle Royale game, where players fight each other to avoid elimination, be the last fan standing, and ultimately, win prizes.